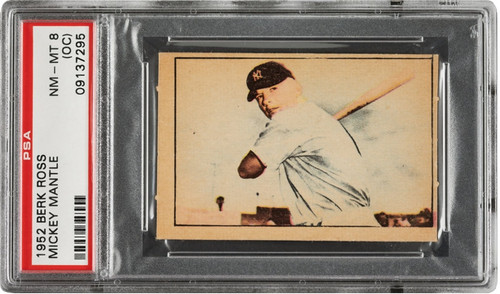 To make things even more interesting, it is debatable if Berk Ross even had the right to feature Mickey and other player's pictures on these cards. In fact, many Giants players during this era filed suit against Berk Ross for using their picture without their permission. Furthermore, Joe DiMaggio who is deliberately absent from both 1951 and 1952 Topps&nbsp;AND&nbsp;Bowman releases is miraculously featured in both the '51 and '52 Berk Ross cards. It doesn't make sense that a relatively unknown brand such as Berk Ross could get permission to feature DiMaggio's photo on their cards but Bowman and Topps were not able to. It is unknown if Mickey gave a damn if his picture was on these cards or not.

Despite all of the history behind this set, the Berk Ross Mantle remains overlooked. In fact, it sells for a fraction of what the 1952 Topps Mantle sells for and many collectors don't even know that it exist. As of May of 2018, there are only 2,370 Berk Ross Mantles graded by PSA and the highest grade awarded is a 8 by PSA. This card has a qualifier due to it being off-centered left to right.