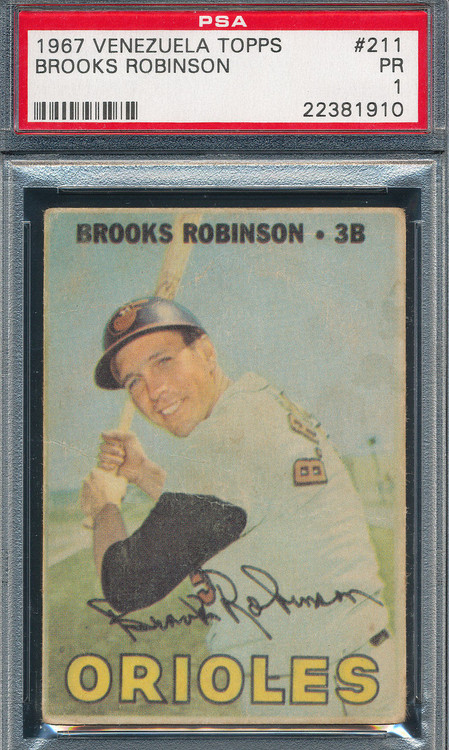 If you aren't familiar with Venezuela Topps, here is your crash course.

As the professional baseball league in Venezuela became popular – Topps attempted to capitalize on this market through a partnership with a Venezuelan company called Benco.  Some of the cards have copyright on the back that Benco printed the card, but some have the same Topps copyright.  For either version, the biggest difference is the lack of gloss on the front and the use of a more crude cardboard. Also, many of the cards have different backs such as this one which is in Spanish. Collectors were encouraged to purchase binders and glue their cards in the binders so many of the cards that you will find will have significant damage on the back.

These cards are EXTREMELY rare. In many cases, a 4 or 5 is the highest graded in pop report. To put things in perspective on the rarity of these cards, PSA graded 198,617 REGULAR Topps cards for the 1967 release. However, they only graded 2,470 Venezuela Topps for the same release. So for every 80 regular Topps, there is only 1 graded Venezuela Topps!

There are only 16 graded 1967 Veneuzuela Topps Brooks Robinson cards. There are only 4 that received a 1 grade and only 12 are graded higher (with one having a qualifier). Think about that for a second. Only 16 graded of a HOF player by PSA?! The 1909 T206 Honus Wagner has 32 that have been graded by PSA!

There are short prints and there are Venezuela Topps. If you don't own one yet, you are missing out on one of the rarest scarcities in the hobby.