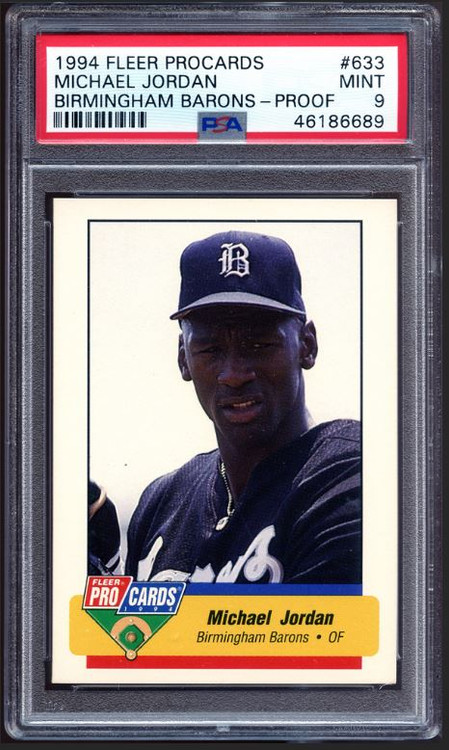 Very few cards of Michael Jordan can compare to the rarity of this 1994 Fleer Procards Proof, offered here in the nearly unsurpassed grade of PSA MINT 9, and ranking as one of approximately only 20 believed to exist. First off, make no mistake about it, the card is bona fide Michael Jordan rookie card, memorializing his first retirement from the game which he perfected, followed by his brief foray into the game which he loved. Interestingly the card was never intended for distribution. The card was one of two variations produced by Fleer for possible inclusion in its finalized 1994 production line. When the decision makers at the Philadelphia-based card company chose the variation that best showed Michael in his new Barons jersey, the proofs, as they were called, were thought to be destroyed. A very small handful, however, were leaked into the market, most likely by Fleer employees, and over two decades later they remain among the most sought-after Michael Jordan cards ever produced. The rarity of this card can't be stressed enough. To put things in perspective, PSA has graded 33 T206 Honus Wagners and has only graded 17 of these Jordan proof cards! This card is pack-fresh with great centering and is worthy of a higher grade.