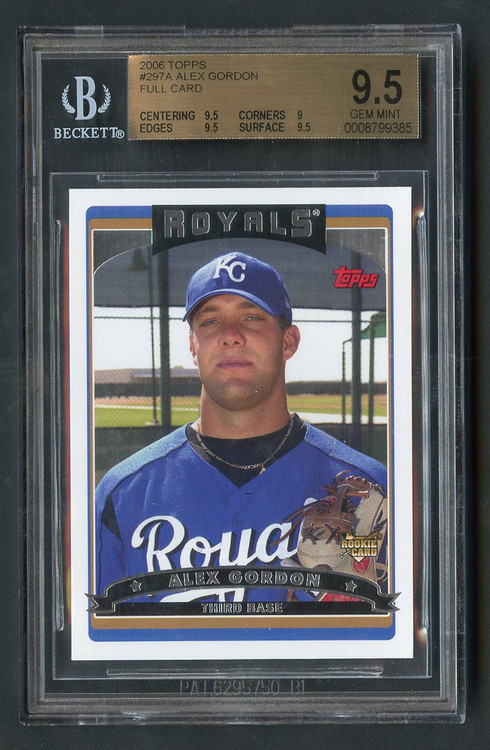 A modern-day Honus Wagner story. This card is not supposed to be in production and is extremely rare.

Here is the scoop:

Topps had a contract with MLB that they could only put pictures of players on cards that played the prior season or were on the team's active roster. Alex Gordon was a phenom and top draft pick but was not technically on their roster when the card was produced. Since he was a rookie, he obviously didn't play the prior year. Topps had violated their contract with MLB! In a frantic attempt to avoid a lawsuit, Topps quickly pulled the card from production. Word has it, one particular Wal-Mart got the majority of this card in "Blaster Boxes." One savvy collector bought the majority of these boxes and since then, the card is sometimes called the "Wal-Mart Card." Topps came up with many creative ways to try to stay legal including manufacturing cut-outs of Alex's face on the card and black outs. However, this is the real deal. The full card and is gem mint and beautifully centered. Arguably, the most important modern day baseball card. It also doesn't hurt that Alex Gordon is a very good ball player and this is his rookie card. He touts numerous All-Star appearances and a Gold Glove award.