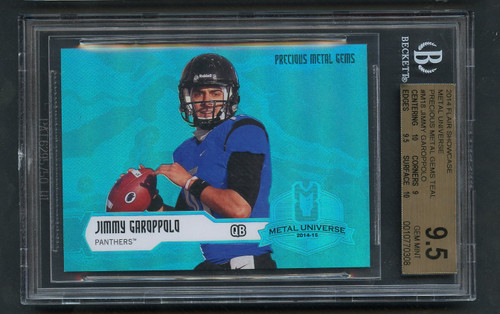 2014 Metal Universe Precious Metal Gems Teal Jimmy Garoppolo Rookie RC /100 BGS 9.5 Gem Mint #M18. If you are not familiar with Fleer Retro's Precious Metal gems cards, they are some of the most coveted cards in the hobby. In many cases, a Precious Metal Gem card during a non-rookie year will yield many multiples in price compared to the player's hottest rookie card. For example, a 1997 Michael Jordan Green Precious Metal Gems card sold for $350,000 in an auction (and the card was altered). Compare that to a 1986 Fleer Michael Jordan PSA 10 that goes for $25k-$40k. This PMG of Garoppolo is serial numbered to only 100, is his rookie card, and is much more beautiful in person than this picture reflects. Collect one of the most coveted cars of the San Francisco 49'ers star quarterback while it is still affordable.