Fish-eye: A certain type of print defect on a card. A fish-eye can vary in size and can lower the grade. It looks like a small circle or "eye" and a fish-eye is typically 1/7 to 1/10 the size of a dime. You will see that this Mays has numerous fish eyes on the surface. 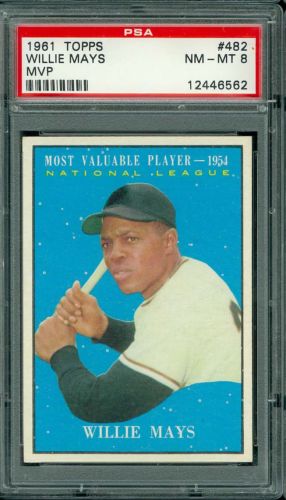 Snow: A certain type of print defect that is very common in 50's and 60's cards. The card's picture and text may exhibit subtle (in most cases), tiny, flecks of white that look like snow. You will notice that this Mantle, although beautiful, does exhibit some snow in numerous spots of the card. 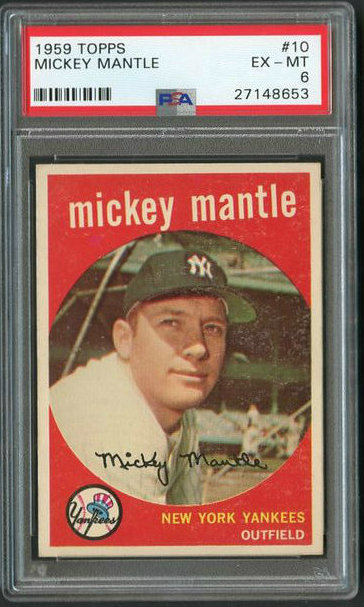 Wet Sheet Transfer (WST): This a certain type of print defect. The 1948 Leaf set is notorious for wet sheet transfers. This happens when a card's ink is still wet when it lays on top of another card which creates the back of one card possibly appearing on the front of another card. 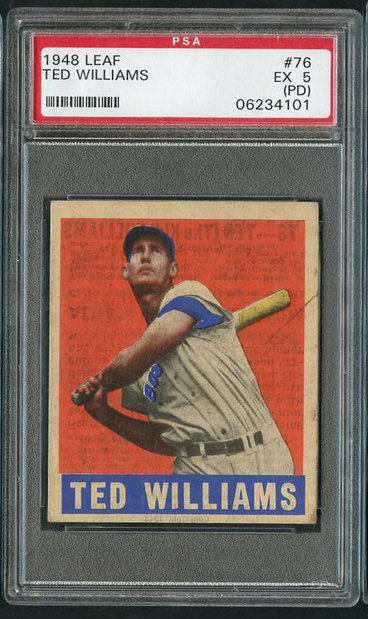 Pop: Pop is short for population. The population of a card is how many exist in that particular grade. For example, you may see a card described as "PSA 9 Pop 1 - None Graded Higher." This means that there is only 1 card that has graded a PSA 9 in the world and there are no 10's. Hence, "none graded higher." BVG, SGC, and PSA all have population reports that you can reference to find out how rare a grade/card.

Registry (PSA): PSA is arguably the most respected grader for vintage cards. They have a registry which is a database that allows you to document the cards you own and the grade awarded by PSA. It is a way for collectors to "keep score" and maintain bragging rights in regards to the quantity and quality of their collection. Someone may highlight a set they are selling as "Highest in PSA registry." This means the set as a whole, is the finest available. Creating the registry was a brilliant move by PSA and many collectors are loyal to PSA's grading service due to their strict grading reputation and the registry which allows collectors to continue to build their reputation in the baseball card community.

Qualifier: A qualifier is a defect on a card. The term was dubbed by PSA and is somewhat similar to an asterisk. A qualifier can be a Print Defect (PD), a Stain (ST), a Mark (MK), Off-Centered border (OC), or Miscut (MC). A card that is graded an 8 (ST) is basically stating that the card is mint but it has a stain on it. In some cases, you can elect for the qualifier to not be present on the card's case. However, if you elect this, the card's grade will be lowered.

Here is an example of a PSA 7 with an "OC" designation: 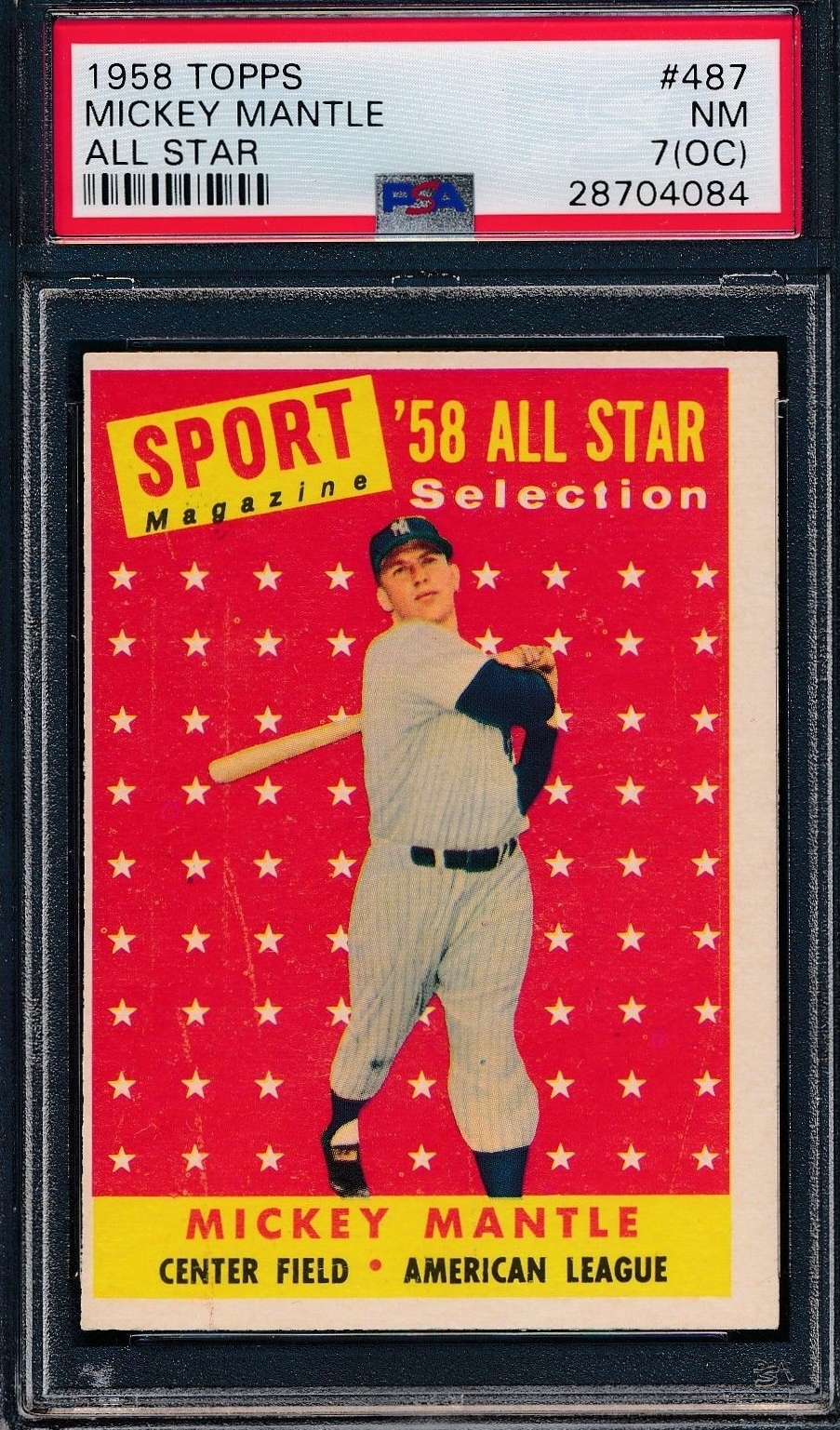 Eye-Appeal: The average collector's perception of a card's quality and condition at first glance. A card that looks like it is in mint condition (8 or above) but is graded a 6 will have excellent eye-appeal. Eye-appeal is something that the grading companies don't seem to give much credit for but baseball card collector's do. You will often see cards in 6 cases sell for as much as the same card in 7+ case due to the 6 having better eye-appeal. Typically, the centering or the proportion of borders left to right and top to bottom are the catalyst for good eye-appeal. A 50/50 ratio is ideal and is very tough to find in vintage cards (53/47 is still considered elite). Also, the surface or registration of a card is a huge factor when it comes to the subject of eye-appeal. A card in a 8 case with perfect corners, edges, and centering with a quarter-sized fish-eye right on the players face is going to have an excellent technical grade but poor eye-appeal. On occasion, you will see fantastic looking cards that look nearly perfect but got significant dings on the grade due to a tiny wax stain or something similar.

Technical Grade: The grade that was awarded a card due to the grading companies' guidelines/rules on deductions for certain imperfections. Sometimes a card can fall right in the middle of certain gray areas for significant deductions. For example, a tiny wax stain on the back can take a card from a 4 to a 2. Also, card that has great centering on the front but is miscut on the back can receive a 2 point in deduction in grading. These two examples are only scratching the surface on the dozens of combinations that can occur that can significantly effect the technical grade of the card. Most people could care less if there is a speck of wax on the back of the card or if the back is significantly off-centered warranting a miscut. Typically, cards that fall into these type of categories are deemed to have fantastic eye-appeal and sell at a significant premium over cards with the same grade.

Registration: A term not to be confused with PSA's "registry". Registration is the quality of the photo and graphics on the card. If Topps' printer during production yields a perfect photo of the player and immaculate graphics of the team logo and player's name, etc., the card will be said to have "excellent registration" or something similar.

Rough Cut: A "rough cut" is a term used to describe a card that naturally endured a rough or jagged-like cut during the manufacturing process. Surprisingly, the grading companies do not penalize a card's grade for the jagged edges and a rough-cut card can even earn a gem mint designation. The 1979 O-Pee-Chee Wayne Gretzky rookie and the 1954 Topps Hank Aaron are cards that are notorious for experiencing "rough cuts" during the manufacturing process.

Here is an example of a 1954 Topps Hank Aaron with "rough cuts" along the left and right edges : 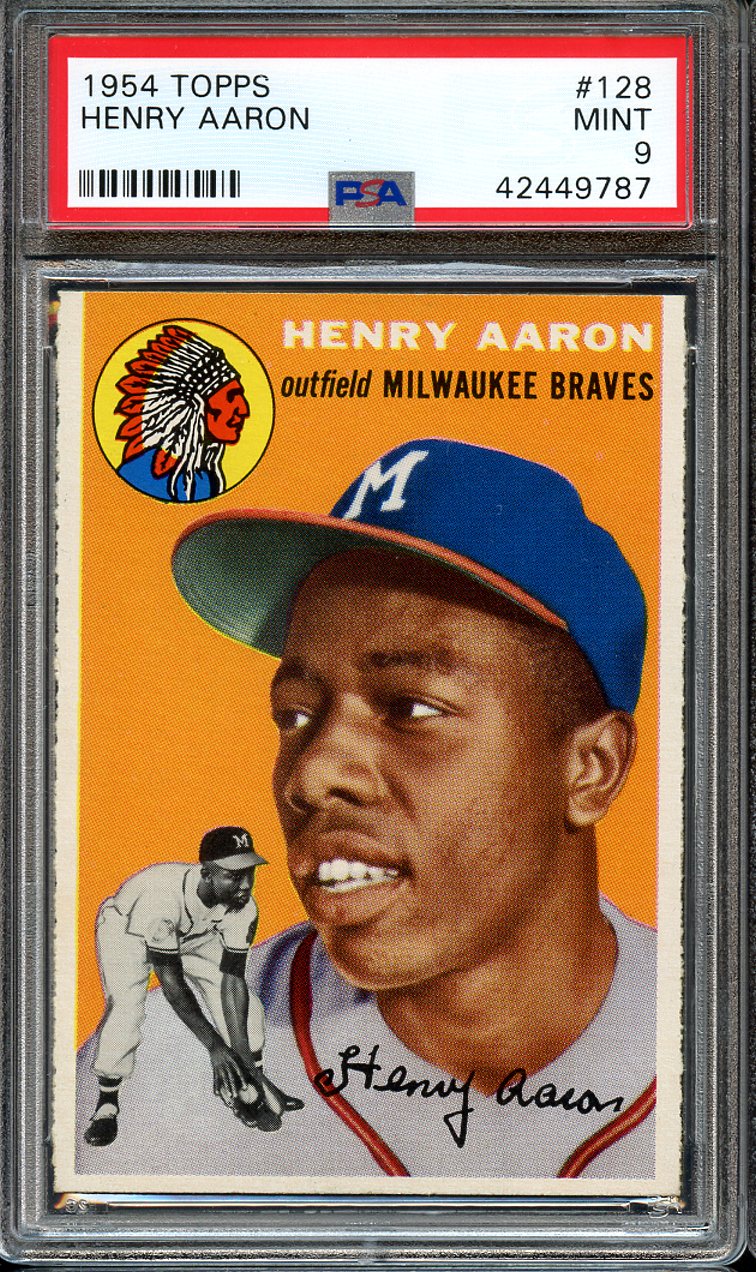 Altered: An altered card is one that was deliberately "fixed" by someone to enhance the presentation of the card. In most cases, the prime objective is to enhance the value of the card. Trimming a card's edges and corners is the most common practice of altering cards. Coloring parts of a card that have experienced color loss is another common practice of card doctors (the 1962 Topps and 1955 Bowman are prime targets). An altered card that looks mint is worth a fraction of the value of an unaltered card that is graded mint by a reputable grader. What is and what is not considered altering a card is debatable in the baseball card community. To some, scratching off a piece of tomato sauce with your fingernail that has been on a card for 20 years is considered okay while some other collectors may consider it altering the card. Regardless of how extreme or liberal you are on your definition of altering a card, both camps agree that trimming and coloring cards is off-limits.

High-End: This is a subjective term which is stating that the card appears to be much better nicer than the card's technical grade suggest. It is not uncommon to see perplexing grades on very nice cards. The major grading companies use an odd grading structure which only allows the overall grade of the card to be 1/2 grade higher than the lowest sub-grade. Due to this, you can have two cards with the same overall grade but one will look much nicer than the other.

Cards are graded by evaluating the following attributes/sub-grades: 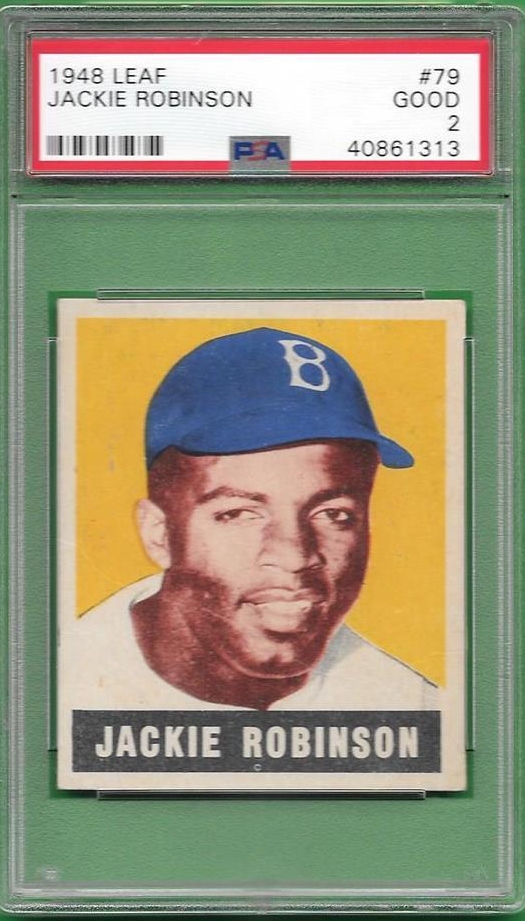 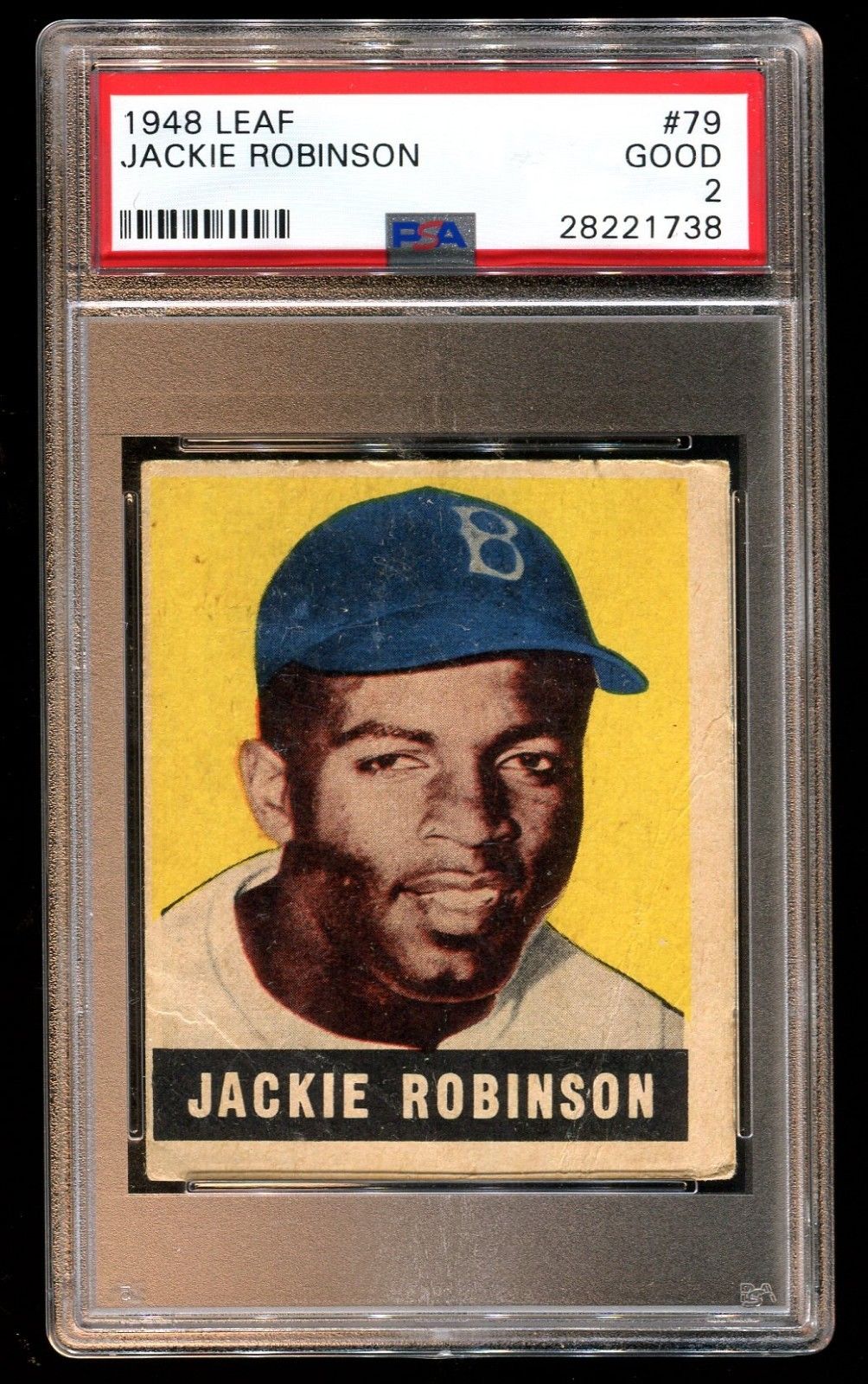 Raw: A card that has not been graded and encased by a professional grading company. A collector is required to make their own assessment on the card's condition, authenticity, and credibility regarding the possibility of alterations.

Undergraded: A subjective term that suggests the professional grader did not grade the card appropriately and gave the card a lower technical grade than it deserved even by the grading companies own technical grading standards. The "high-end example" of the Jackie Robinson above is classic case of a card that can be deemed undergraded by the majority of the hobby's community. The card probably has a surface wrinkle on it which would bring the surface grade down to about a 4 even though it looks like an 8. Regardless, the centering looks like a 8.5, the corners look like a 5, and the edges look like a 6 (on a bad day). With the half-point bump on the lowest sub-grade, this card looks like it belongs in a 4.5 rather than a 2 case. Hence, why it is best to buy the card and not the case.