Rookie cards and first year certified autographed cards continue to soar in value in 2019. Many cards this season featuring star baseball players have reached record high prices and still have room to grow! These types of cards can be great long-term investments and high-grade, professionally graded examples such as a BGS 9.5 or PSA 10 are becoming increasingly popular. Here is a list of the Top 10 hottest rookie cards to start the 2019 baseball season.

Bellinger broke the NL home run rookie record when he hit 39 homers in just 132 games played in 2017. In his 2018 campaign, he seemed to experience a bit of a "sophomore slump" and touted a respectable but civilian-like 28 home runs and 75 RBI's. However, since the start of the 2019 season, Bellinger looks like re-energized superstar and is flirting with 2001 Barry Bonds-esque stat lines. As of May 3rd, 2019, he already has 14 homers while batting .425 through his first 32 games of the season. As a result, his first year Bowman Chrome Auto has skyrocketed in value; especially gem mint BGS 9.5, BGS 10, and PSA 10 examples. Bellinger’s autographed chrome card has been one of the biggest risers in the hobby since the start of the 2019 season. Can Bellinger keep up this historic pace? 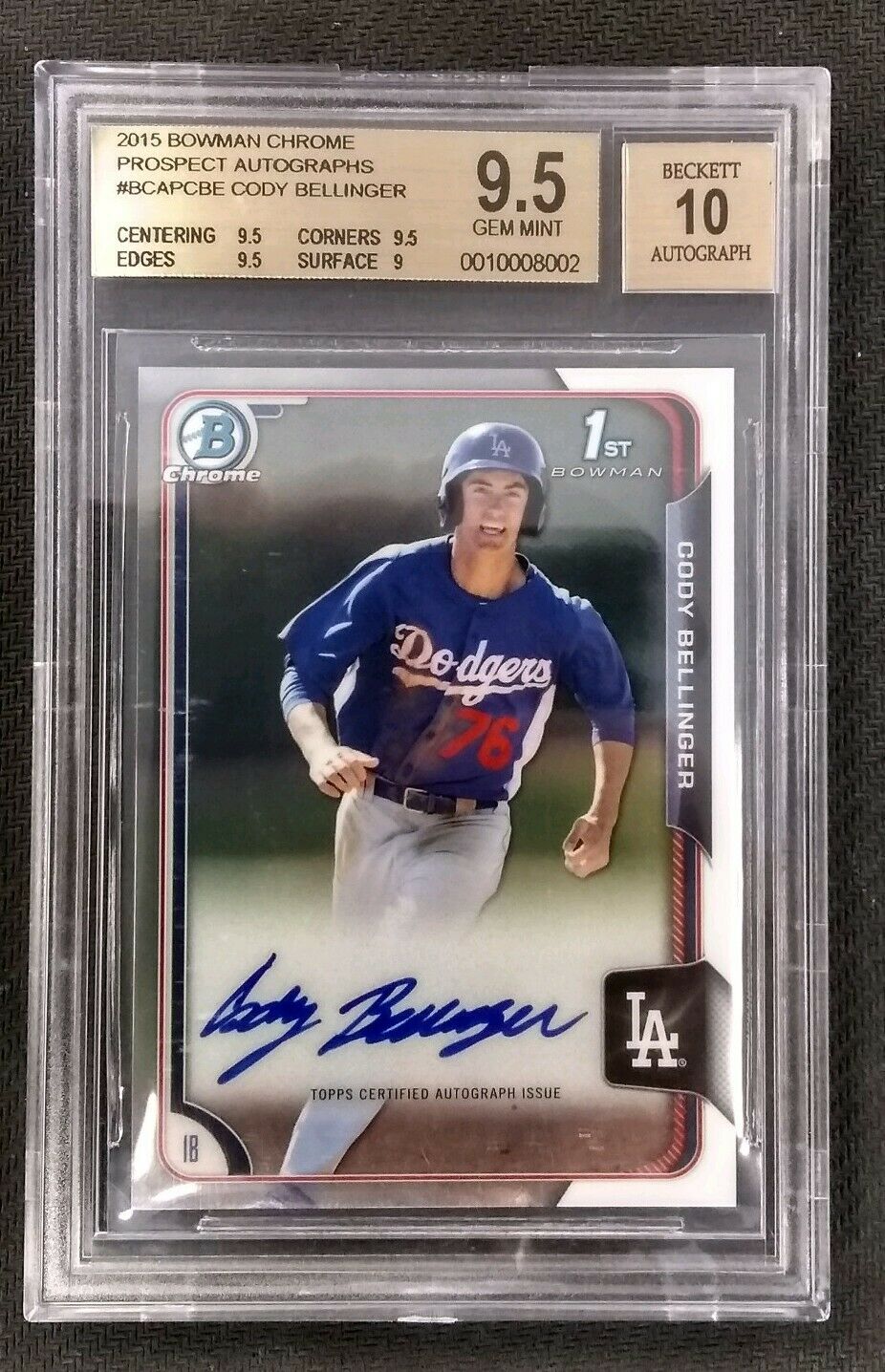 Trout continues to be one the most sought after baseball players in the entire sports card hobby. His Topps Update rookie card has quickly tripled in value dating back to the fall of 2018. Trout’s Topps Update rookie is regarded as one of the most popular rookie cards again this year and a PSA 10 examples are in very high demand. BGS 10 examples are 3x the value of a BGS 9.5! This particular card has caused many other Topps Update rookies of other star players to also trend up in value. Collectors or buyers are calling it the “Trout effect” because of how this card continually trends up in value! This card may continue to rise in value because Trout is already being mentioned as one of the best baseball players of all-time. 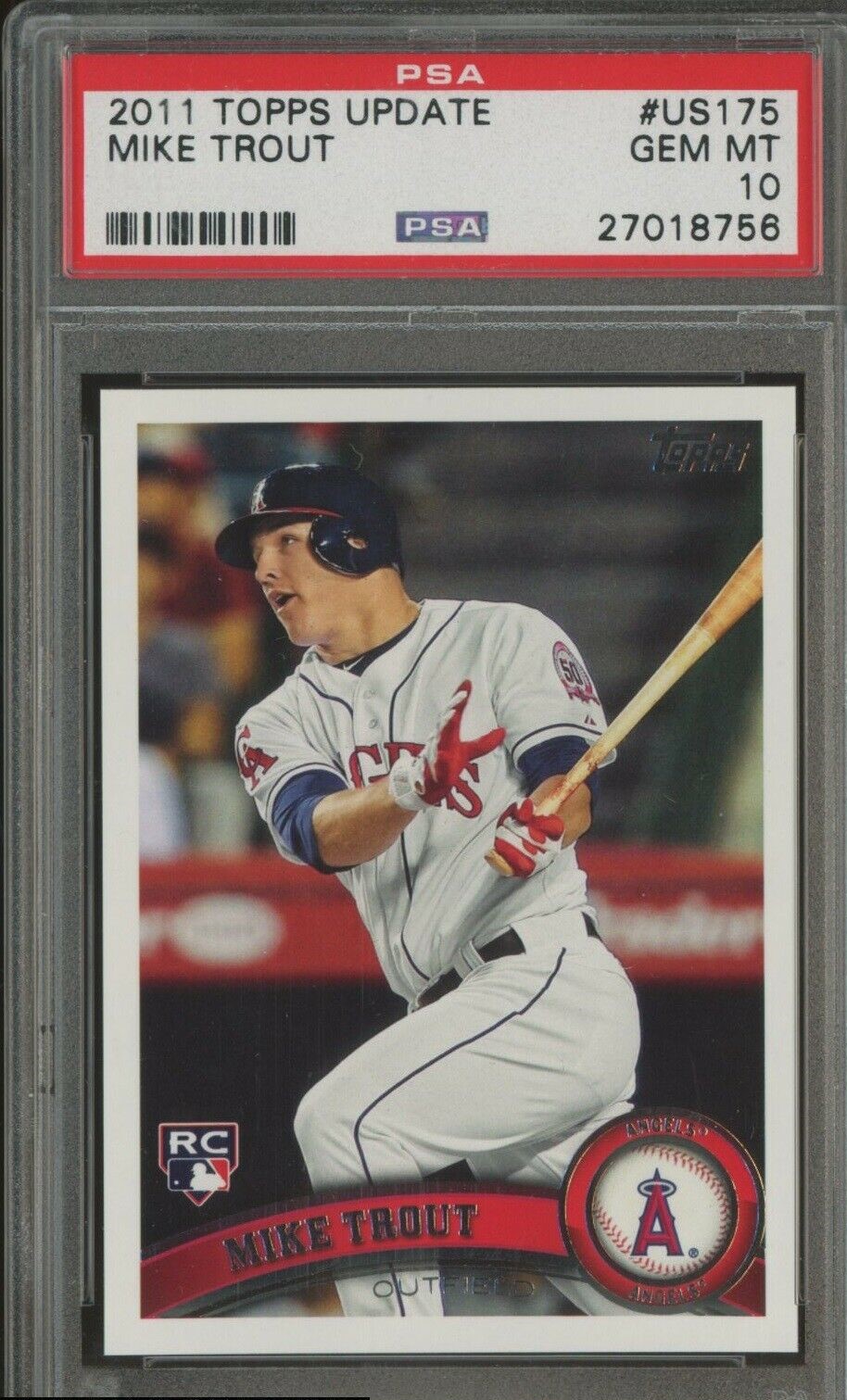 Christian Yelich finished the 2018 season with the Brewers red-hot and even won the NL MVP award. At the start of the 2019 season, Yelich didn't miss a beat and picked up right where he left off in 2018 and has blasted 14 home runs and batted over 350 through April of the 2019 season. As a result, his first year Bowman Chrome Auto from 2010 has seen a 3-5X change in value in a short time. PSA 10 and BGS 9.5 (GEM MINT) examples of the card have continually gone up in value since Yelich began his hot streak at the start of the year. Yelich has undoubtedly been one of the biggest risers in the hobby since the start of the 2019. 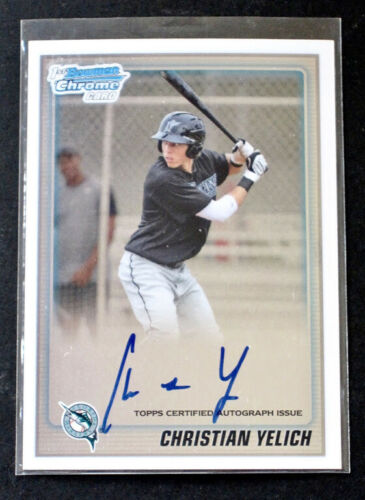 Ronald Acuna Jr. was named NL Rookie of the year in 2018. Since he was called up last season, he has been one of the hottest and trendiest players that collectors have been scrambling to acquire in the the hobby. One particular card that has seen a 3X increase since the start of the 2019 season is Acuna’s Topps Update Rookie, which is card number US250. This particularly card graded a PSA 10 has already become very sought after and should continually trend up in value. This card is already being mentioned as the key rookie card to collect of Acuna, Jr. along with his first year Bowman Chrome auto from 2017. More buyers and collectors will soon find out about Acuna Jr.’s Update Rookie as it is a bit under the radar for novice collectors. 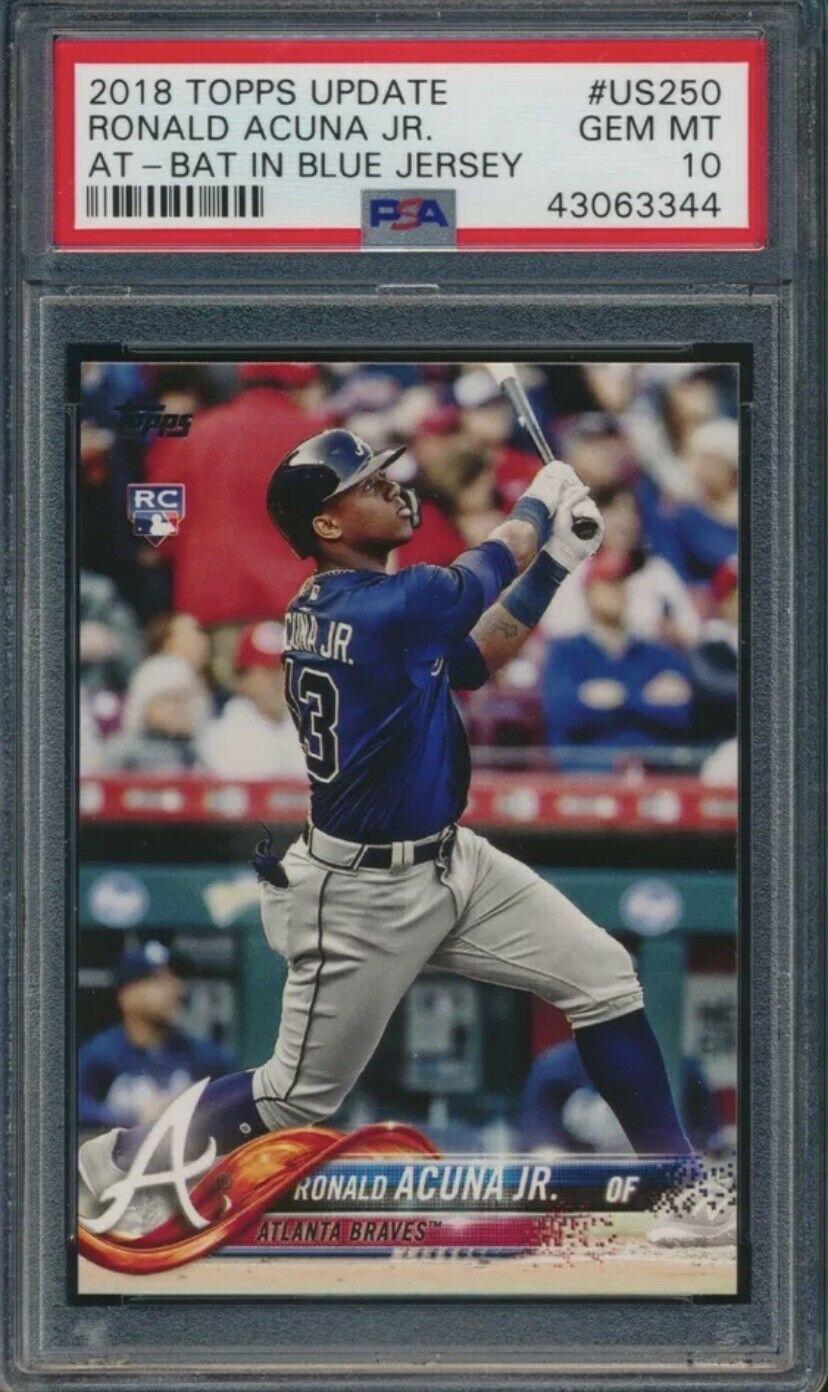 Pete Alonso made the Mets opening day roster in 2019 as their starting first baseman. Alonso quickly became a force in the Mets lineup and is already being regarded as one of the NL ROY favorites in 2019.He recently won NL Rookie of the Month for April and has already hit 9 homers with 26 RBI's to accompany his .290 plus batting average. Alonso’s most popular card is his 2016 Bowman Chrome Draft Autograph. This particular card has seen a 8-10x increase in value since the start of spring training in 2019. Alonso's Bowman Chrome Autograph featured in a PSA 10 grade has been one of the most popular cards this season due to it's low PSA Population Report which stands at only 26 copies (5/3/19). Will Alonso win the NL Rookie of the Year in 2019? 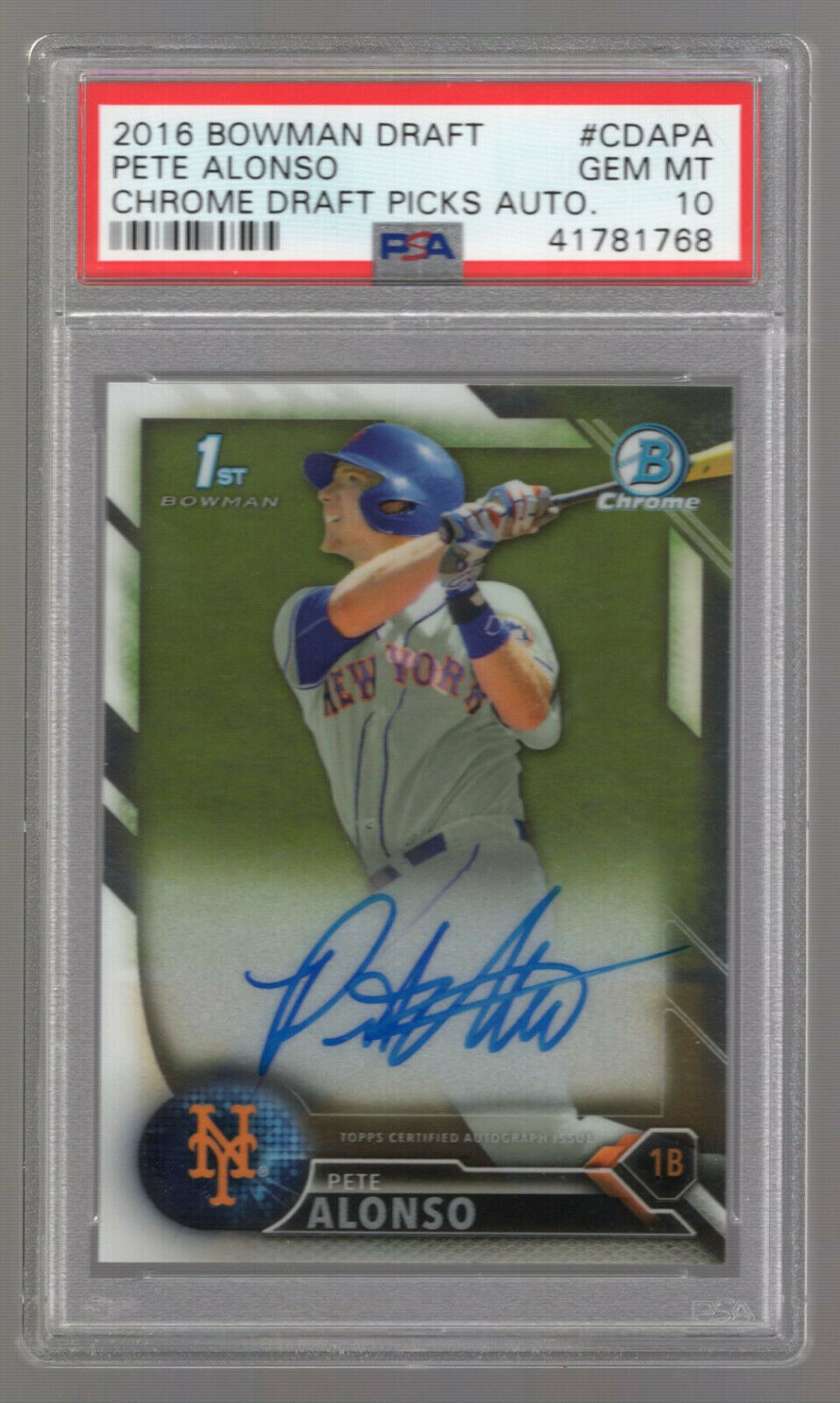 Bryce Harper was one of the biggest free agents during the MLB off-season of 2018. He eventually would sign with the Phillies for 13 years and $330 million. Since Harper signed with the Phillies, his cards saw an immediate increase in value. Harpers' most sought after card remains his 2011 Bowman Chrome Autograph; especially examples that are graded a BGS 9.5 or PSA 10. He quickly made an impact with the Phillies at the start of the year homering in consecutive games early in the 2019 season, which again caused his Bowman Chrome Autograph to increase in value. This card should continually increase in value over time and will always be regarded as his most sought after. 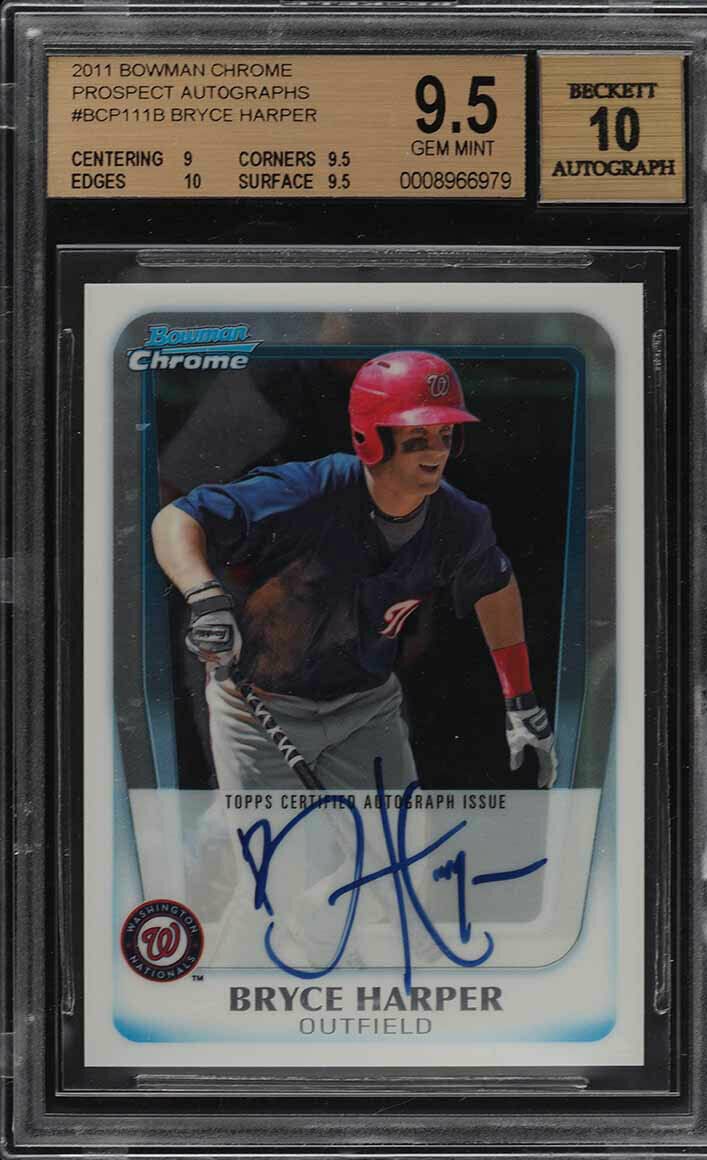 Mookie Betts had a monster year in 2018; he was named the AL MVP in 2018 and won the World Series with his Boston Red Sox teammates. His first year Bowman Chrome autographed card from 2014 quickly saw an increase in value leading up to the start of the 2019 baseball season. The cause of this increase was due to the fact that many other star players' Bowman Chrome Autographs were increasing in value so Betts’s card soon followed. His card featured in a BGS 9.5 and PSA 10 continue to be very popular. He is often regarded as one of the top five players in baseball and which is amazing considering he is only 26 years old. 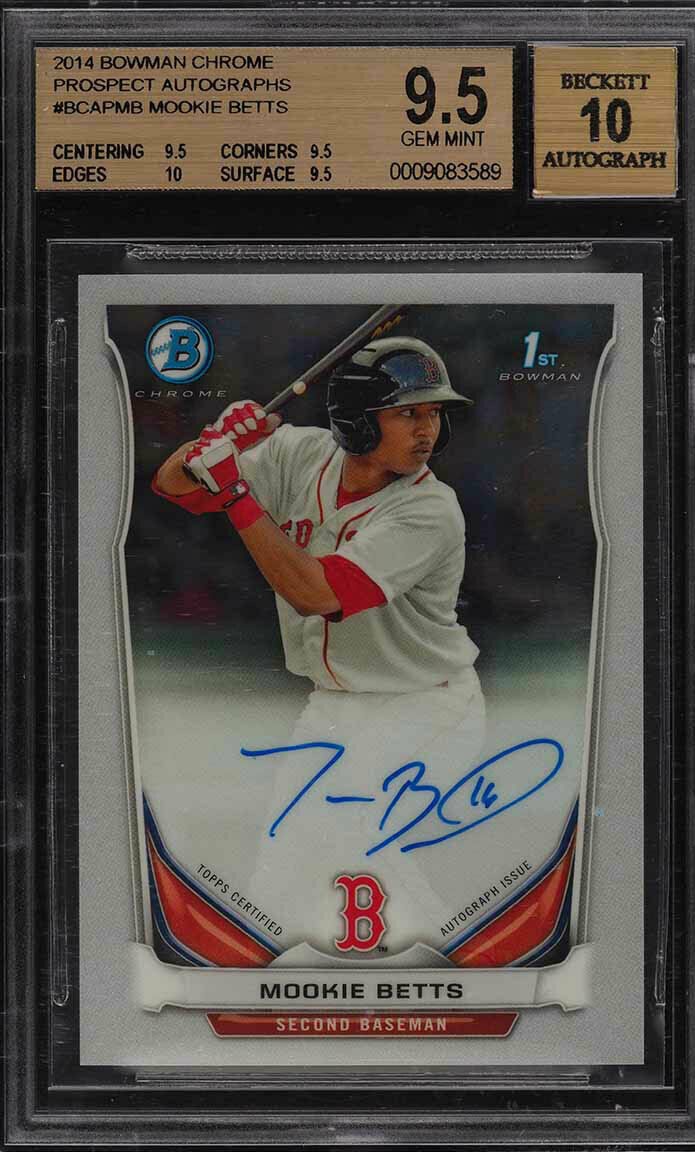 Javier Baez had his best season in 2018 with the Cubs and has started the 2019 season red-hot! In his first 32 games of the '19 season, Baez has already hit 11 homers and is batting .314. His most sought after card continues to be his 2011 Bowman Chrome Autograph which should only continue to go up in value throughout the season. The card has a lot more upside and is still very underrated in our opinion. BGS 9.5 and PSA 10 examples are continually trending up in value and you may want to invest in one while you still can! 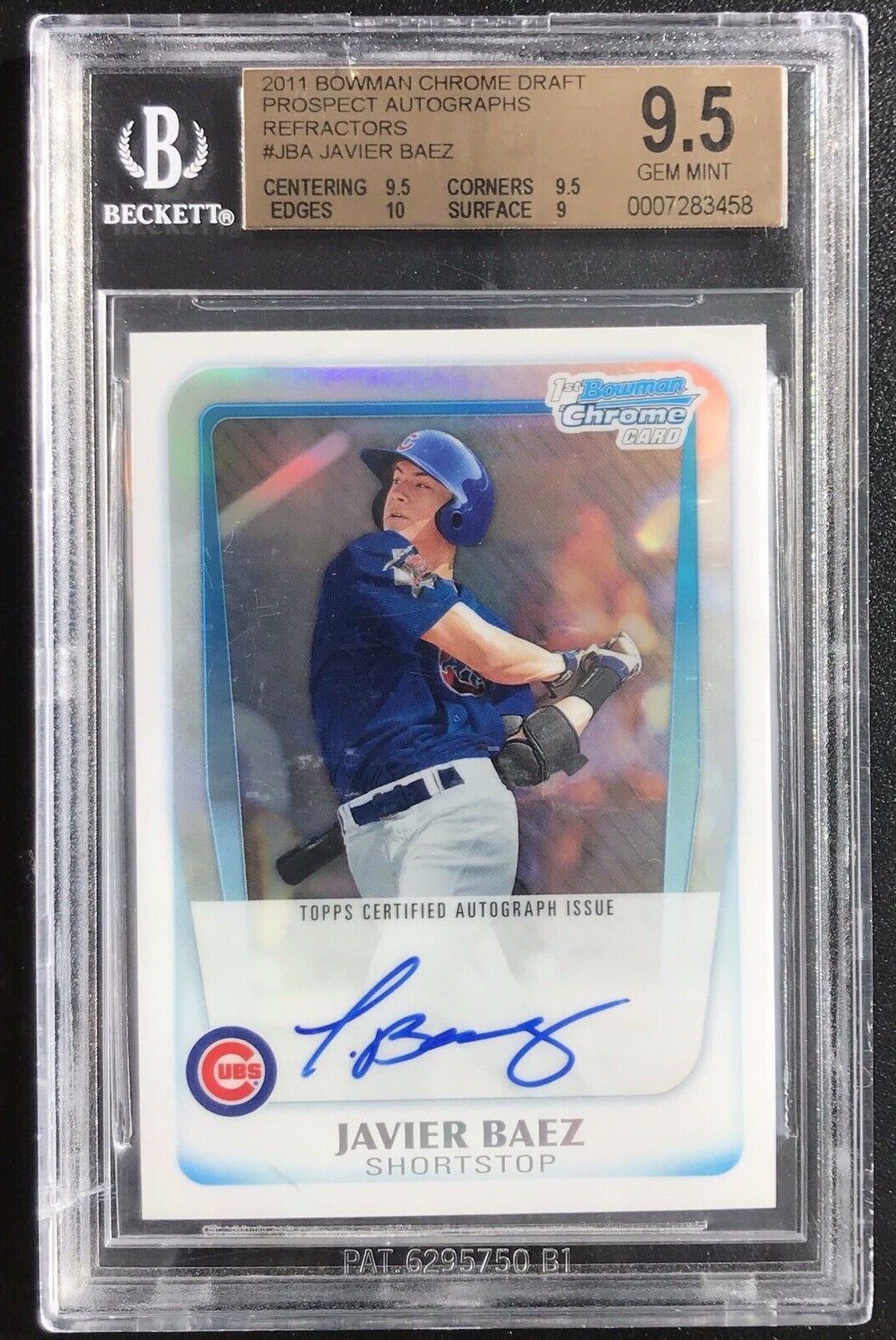 DeGrom finished the 2018 season with an outstanding 1.70 ERA and 269 strikeouts which earned him the NL Cy Young Award. deGrom does not have many autographed rookie cards; however, his most sought after rookie card is his 2014 Topps Heritage Real One Auto. The card is featured in a blue ink version and the red ink; red being more rare. deGrom’s Heritage Auto has doubled in value since the off-season as more collectors realizing how tough of a short-print this autographed card really is. This card may continue to trend up in value as deGrom is one of the best pitchers in baseball. 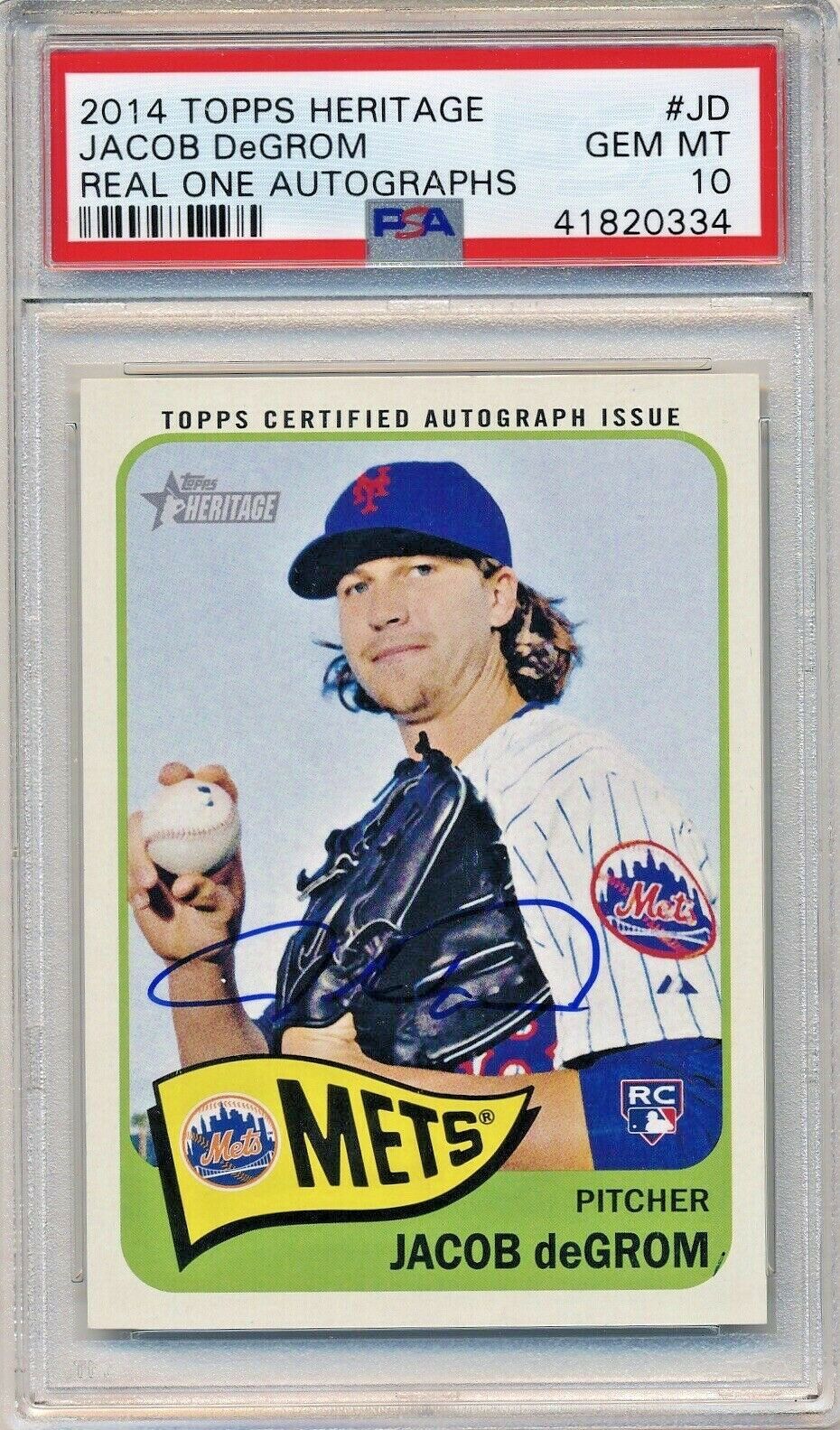 Prospects are a huge part of the baseball collecting industry as everyone is always looking to invest in the next best player. Nowadays, the top baseball prospects have reached all-time highs in the hobby and already outselling many star players who are actually playing in the majors. The latest new prospect featured from the brand new 2019 Bowman set is Wander Franco of the Tampa Bay Rays. Franco is only 19 years old but already has 3 homers in Single-A and many baseball experts believe he will be regarded as a top 5 prospect overall by next season. His Bowman Chrome Autograph has been one of the biggest reasons as to why the 2019 Bowman craze has taken off this season. Autographed copies featured in different color variations such as red, orange, gold, blue, purple are especially sought after. The Superfractor 1/1 Autograph of him has already been pulled and could sell for a fortune. Can Franco reach similar hype to Vlad Jr.?

Which Baseball rookie cards do you think are the hottest this season? 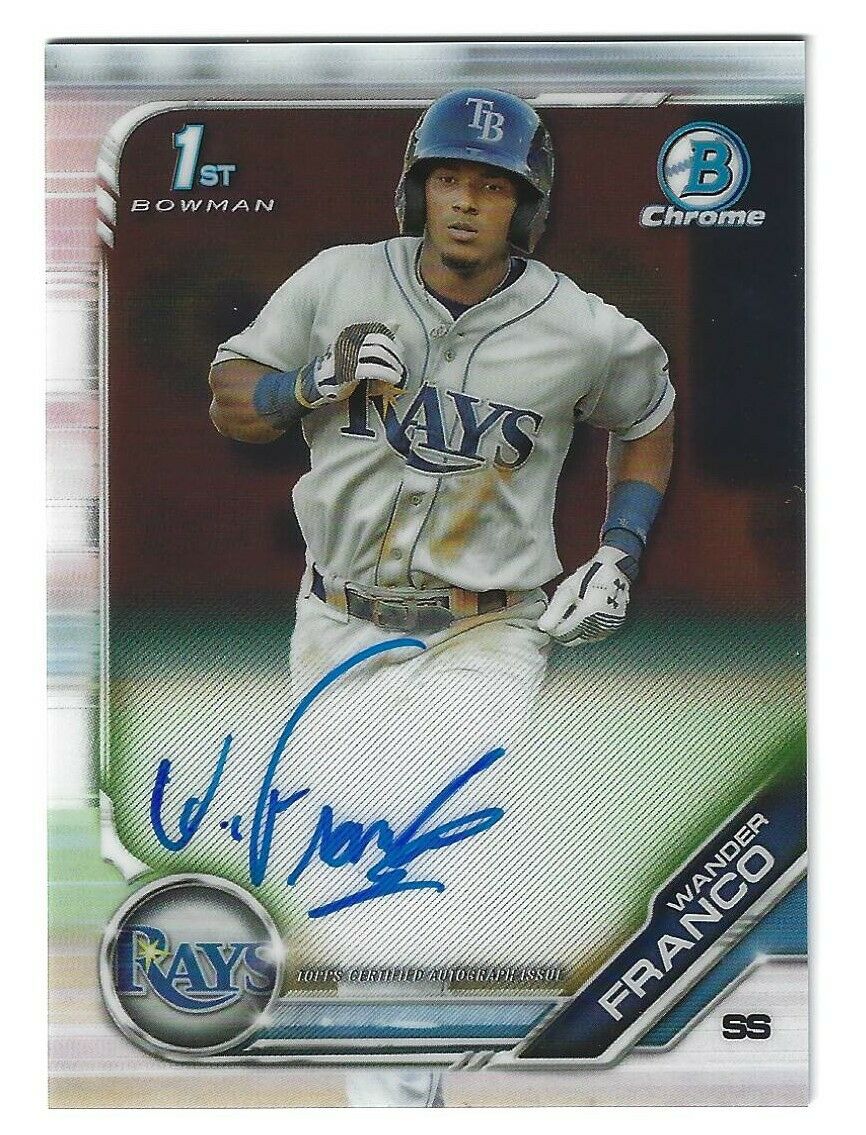