Michael Jordan is considered the greatest basketball player of all-time; the phrase G.O.A.T. (Greatest of All-Time) is referenced when talking about him in this millennial era. Michael Jordan’s basketball cards are some of the most highly sought after cards in the industry. Recently many of his cards have sold for record prices within the last year and they will continue to increase . Many collectors who purchased Jordan cards in the 1990s would have never expected some of these current values on MJ’s cards. Jordan cards helped revolutionize the sports card hobby especially on card autographs, high-grade examples, rare serial-numbered inserts, and jersey and patch card inserts. Here is a list of Michael Jordan's top sports cards. 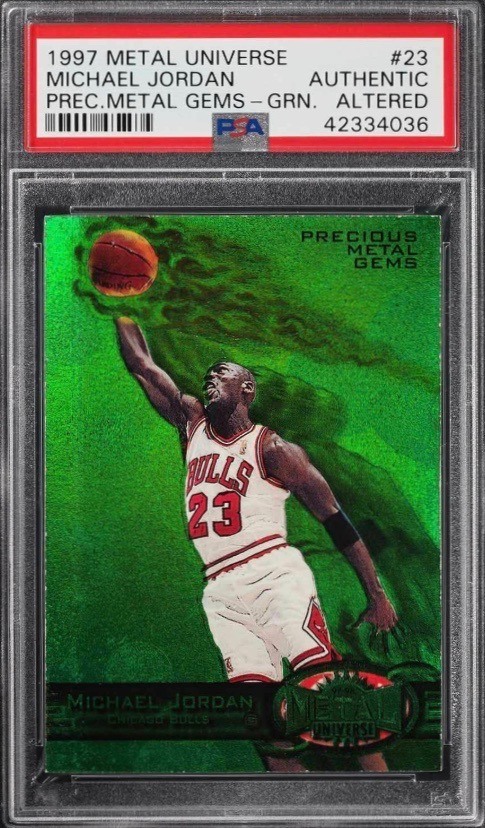 Jordan’s Metal Green Gems card was talk of the sports card hobby during February of 2019. This card would sell for a record $350,000 on eBay auction to a collector. His Metal Green Gem is regarded by many people in the sports card hobby as one the crown jewels of Jordan insert cards. The card has a print run of just 10 copies and many of them are most likely owned by other Jordan collectors, which makes this card almost unavailable for new future buyers or collectors. Will another Metal Gem Green ever come up for sale in the future? 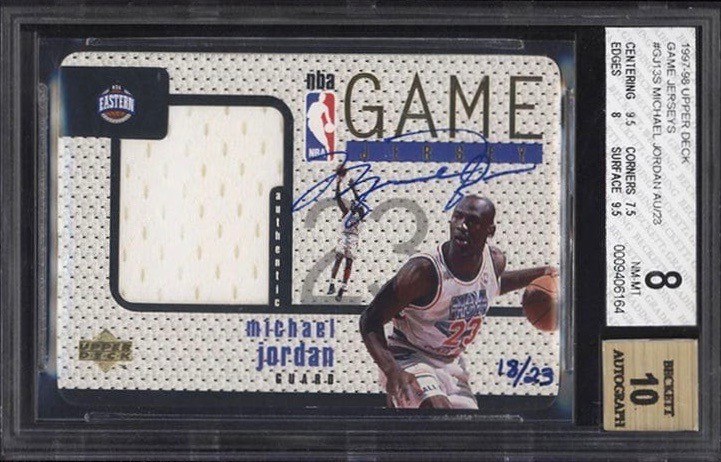 This card was one of the best ever new and innovative ideas that Upper Deck ever produced. This card helped shaped the future of sports card collecting by providing the first card that was featured with a piece of a game jersey with an on-card signature of Jordan along with a handwritten serial number from MJ. There was only 23 of these ever produced making it very difficult to find. This card is easily a six-figure+ card and will only continue to increase in value. 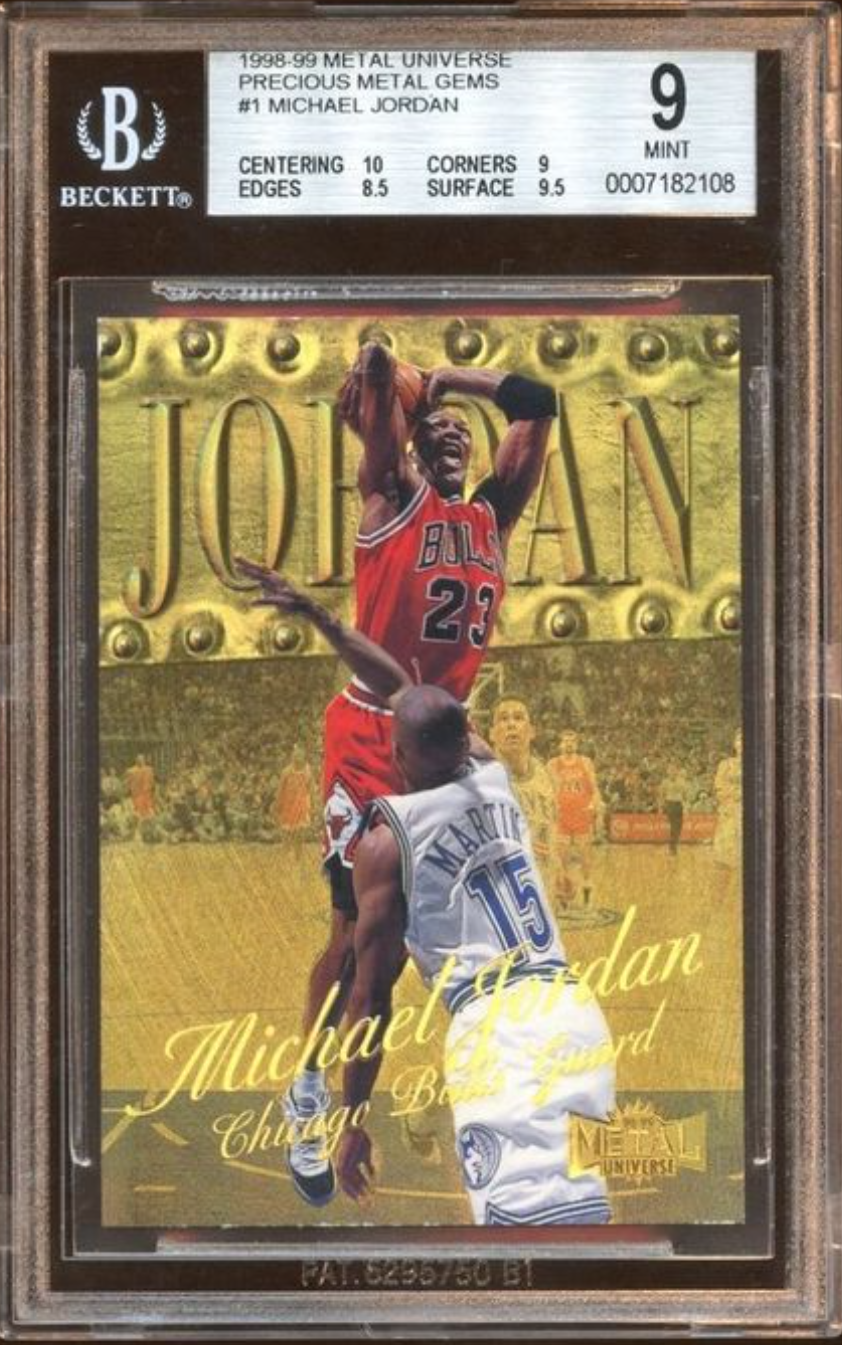 Jordan’s Metal Universe Precious Metal Gems featured from 98-99 is another highly sought after serial numbered insert card. This one in particular is so rare that they rarely pop up for sale. This insert is a must have for any Jordan collector, many of these are already in people’s collection which will make this card difficult to re-appear on the market in the near future. Look for Jordan’s Metal Universe Precious Metal Gems card to continue to increase in value each year. 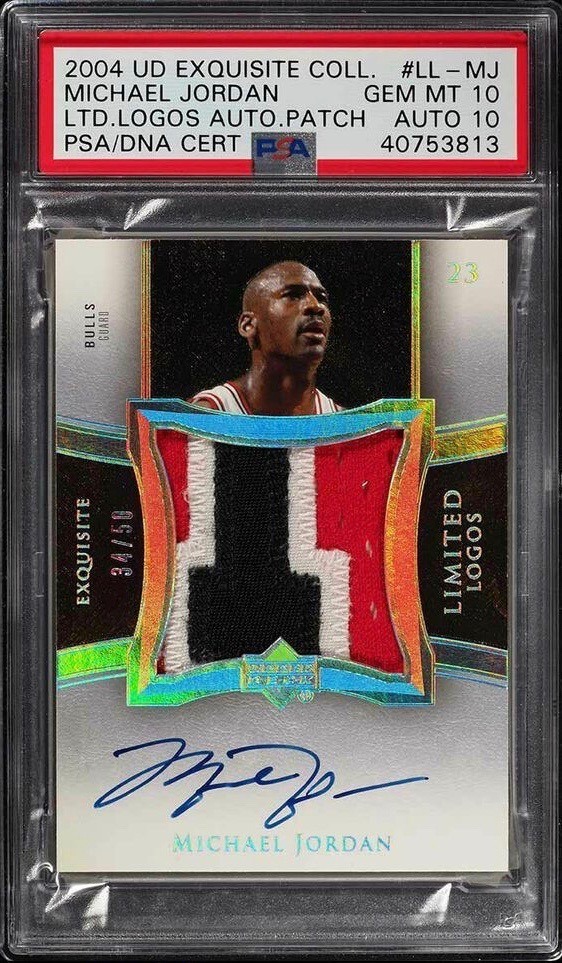 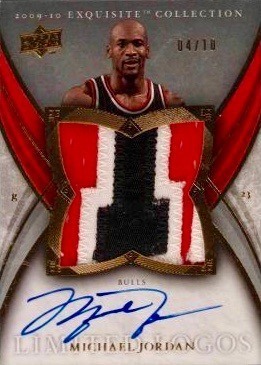 Jordan’s Exquisite Autographed card from 2009 was one of the last year that Upper Deck produced an auto of him featured of him specifically from the Exquisite set. The card is extremely limited to only 10 copies and is very similar to the 04 version with a multi-color patch and on card autograph of MJ. Since Jordan stuff is so limited in the Exquisite product and this card will always be considered one of his best. 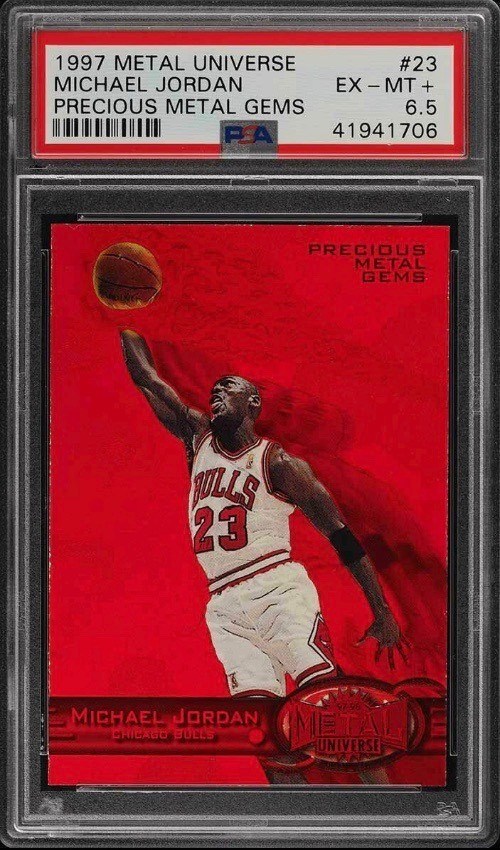 This card is similar to the 1997 Precious Metal Green except this card is the Red version and has a print run of 90 copies. Some Jordan collectors or buyers prefer the red version because it blends in better with Jordan’s uniform from when he was on the Bulls. Since the Green version sold for a historic amount this year the Red version continues to climb in value as well and is highly sought after too. This is an extremely difficult card to find in mint condition and even examples that were graded a PSA 6.5 sold for 65k+ within this past year. Many Jordan collectors just want to own one of these because of the notoriety of the card. 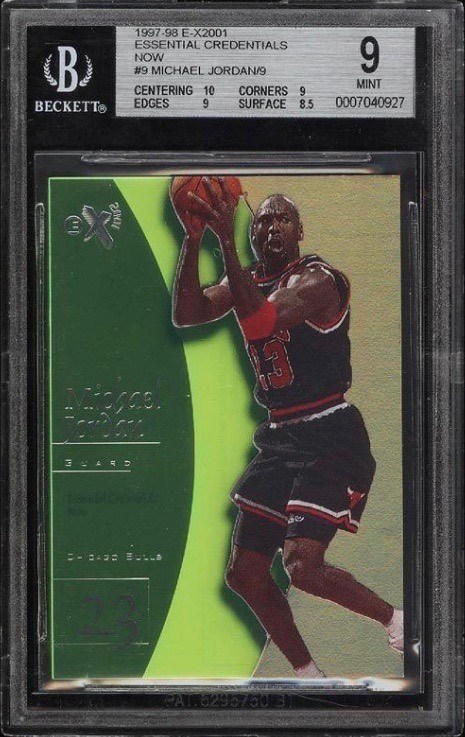 One other highly sought after mid 1990s insert of Jordan is his 1997 Skybox E-X2001 Essential Credentials Now. The card has a print run of just 72 copies and is serial numbered on the back. This card is considered one of Jordan’s best insert cards from the 1990s, these are rarely appearing for sale as well because they are so limited. The last completed sale for this rare Jordan insert sold for nearly $52,000 in a BGS 9 example. 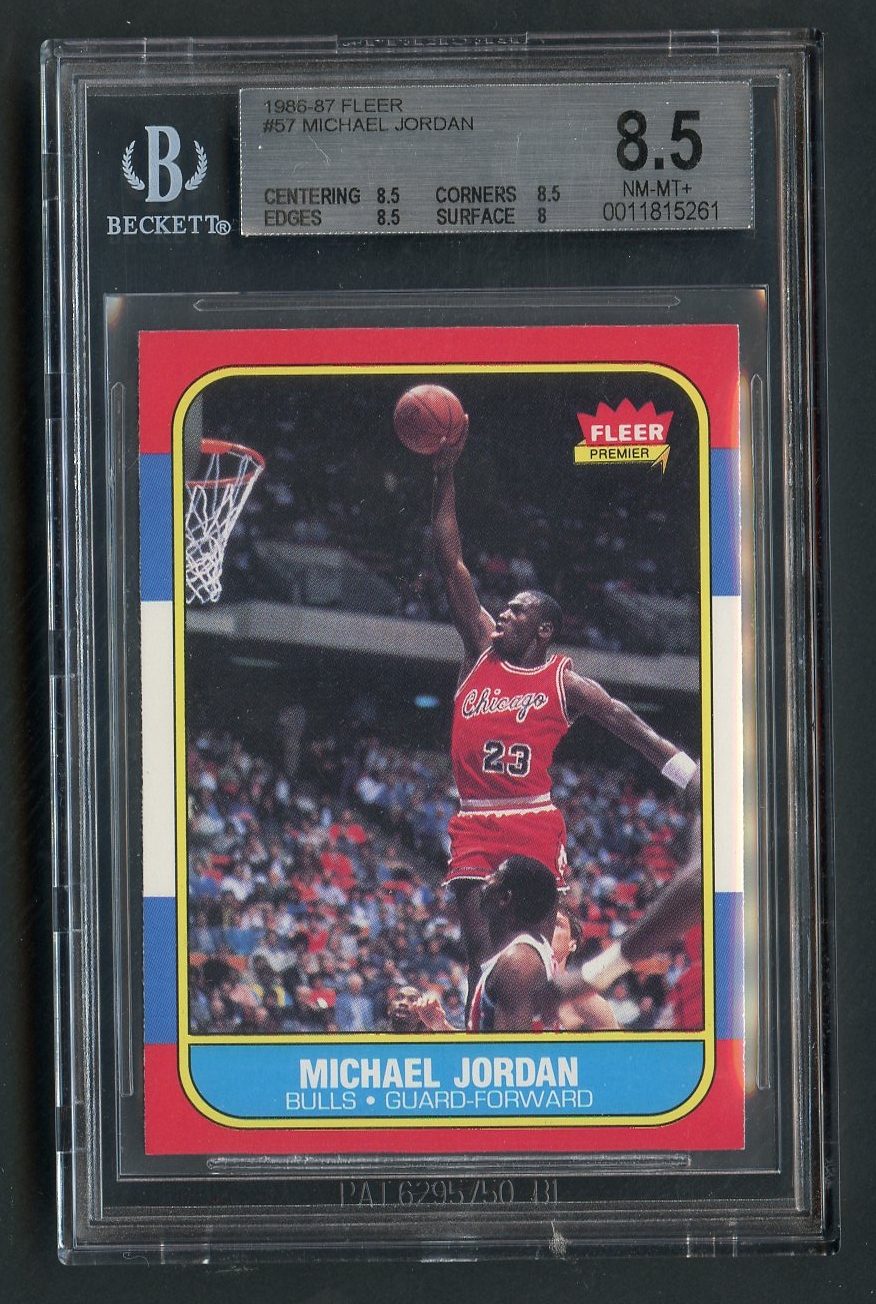 This card is arguably Jordan’s most popular rookie card and considered one of the greatest rookie cards ever created in the sports card industry. Jordan’s Fleer Rookie card is continually increasing in value yearly in all different types of condition and graded examples. The image of this card is what stands out to me and is one of the best cards ever created, which shows off a young MJ with his tongue out doing one of his signature dunks. Jordan’s Fleer rookie is still a great investment with tons of upside because he is still being talked about often today. His Fleer rookie card will always be considered his most popular card for the majority of collectors who want to invest in Jordan cards. 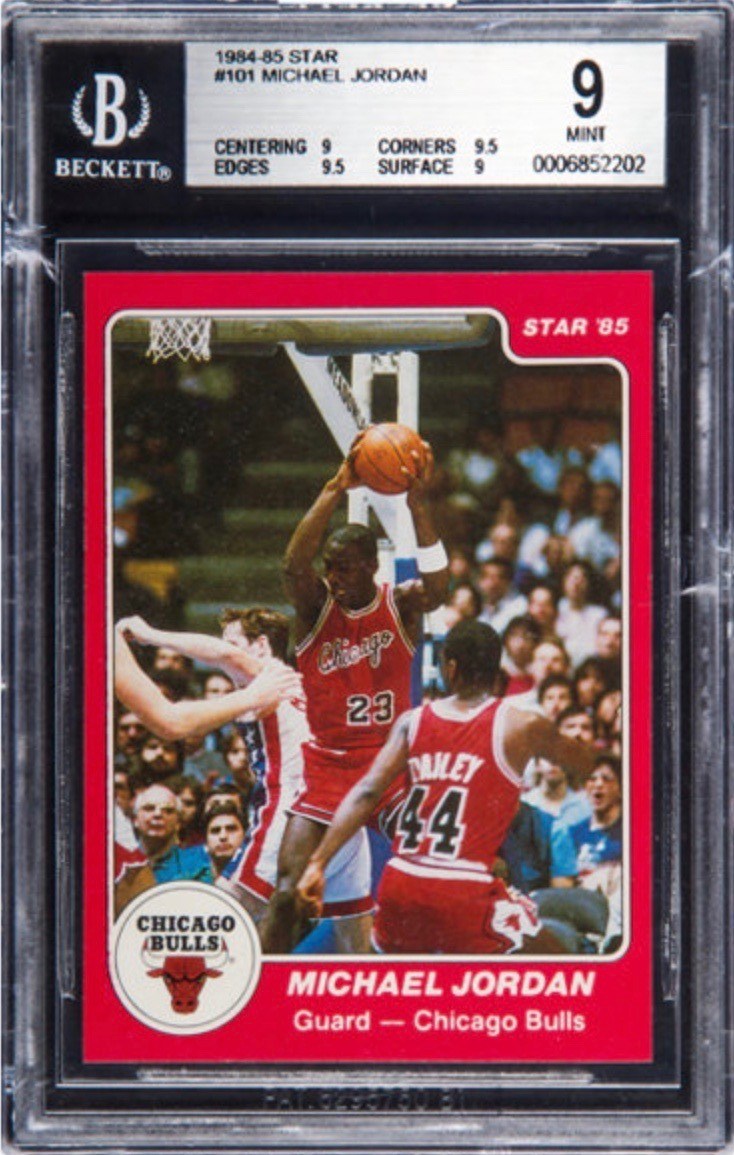 Before Fleer came out with their historic set in 1986, Jordan Star cards were the first official NBA licensed cards available of Jordan you could obtain. There is many different star Jordan cards including ones that were featured in a blue border and other red bordered versions, but this one is his best! The most sought after one is regarded as his first true rookie card or better known as his XRC. The card was released during Jordan’s actually rookie season in 1984. Jordan’s star rookie card was undervalued for a number years but within the last five to ten years has seen a huge increase in value and demand. This card continually is becoming highly sought after especially high-grade examples. This card is prestigious and other Star Jordan’s PSA will no longer even grade ungraded examples due too many counterfeits surfacing. Jordan’s first star rookie card is a must have for any MJ collector. 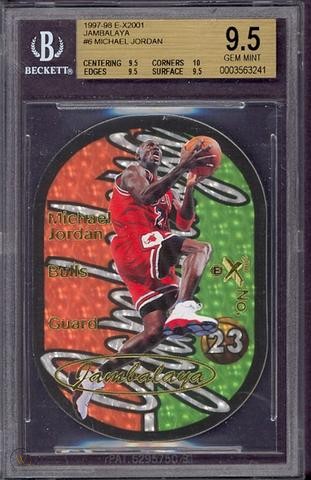 This card is considered one of Jordan’s most unique and popular insert cards. His Jambalaya insert was one of the toughest cards to pull out of a pack during the mid-1990’s. A rare die-cut that will always have great long-term value and will be tougher to find each year since so many of these are in many people’s collections. Near mint versions ungraded have sold for as high as 10k+ recently! 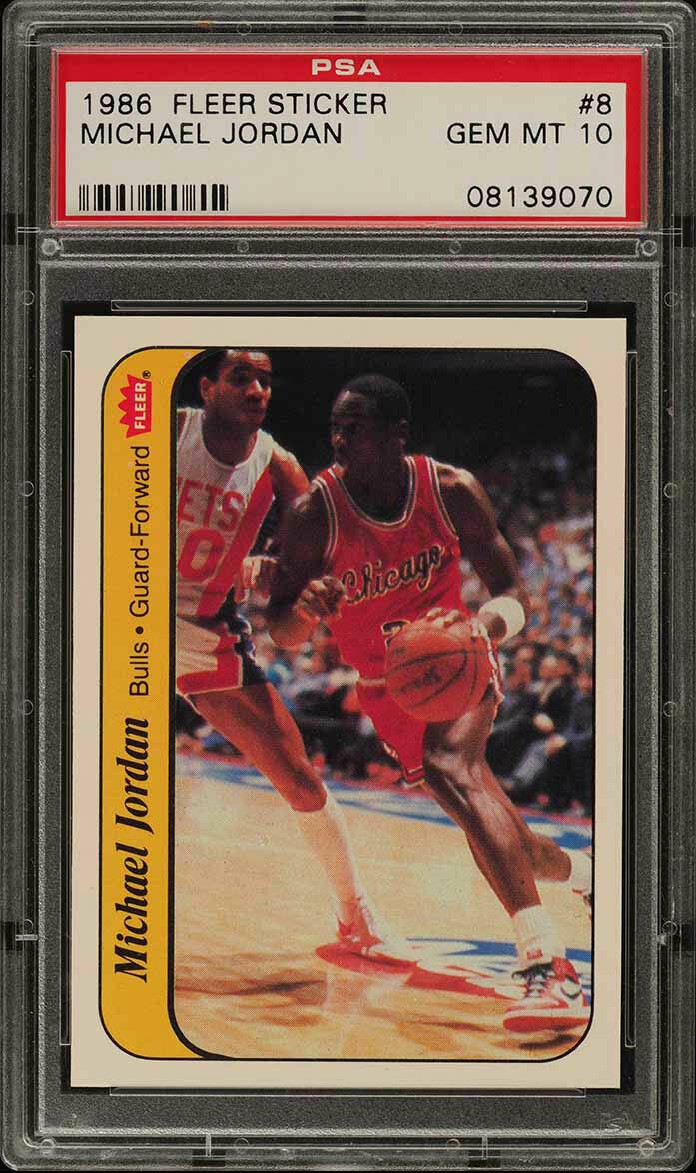 Jordan’s Sticker card from 1986-87 easily can be considered a rookie card. This card was the first of its kind to come out and was featured in the same set of his famous 1986-87 Fleer Rookie. Jordan’s Sticker rookie has known to be condition sensitive and many examples were off-centered which makes high-grade examples very sought after. Jordan’s Sticker rookie has trended up in value within the last couple of months and will continue to do so because many collectors or buyers are finally realizing that this card is considered a rookie of Jordan as well. 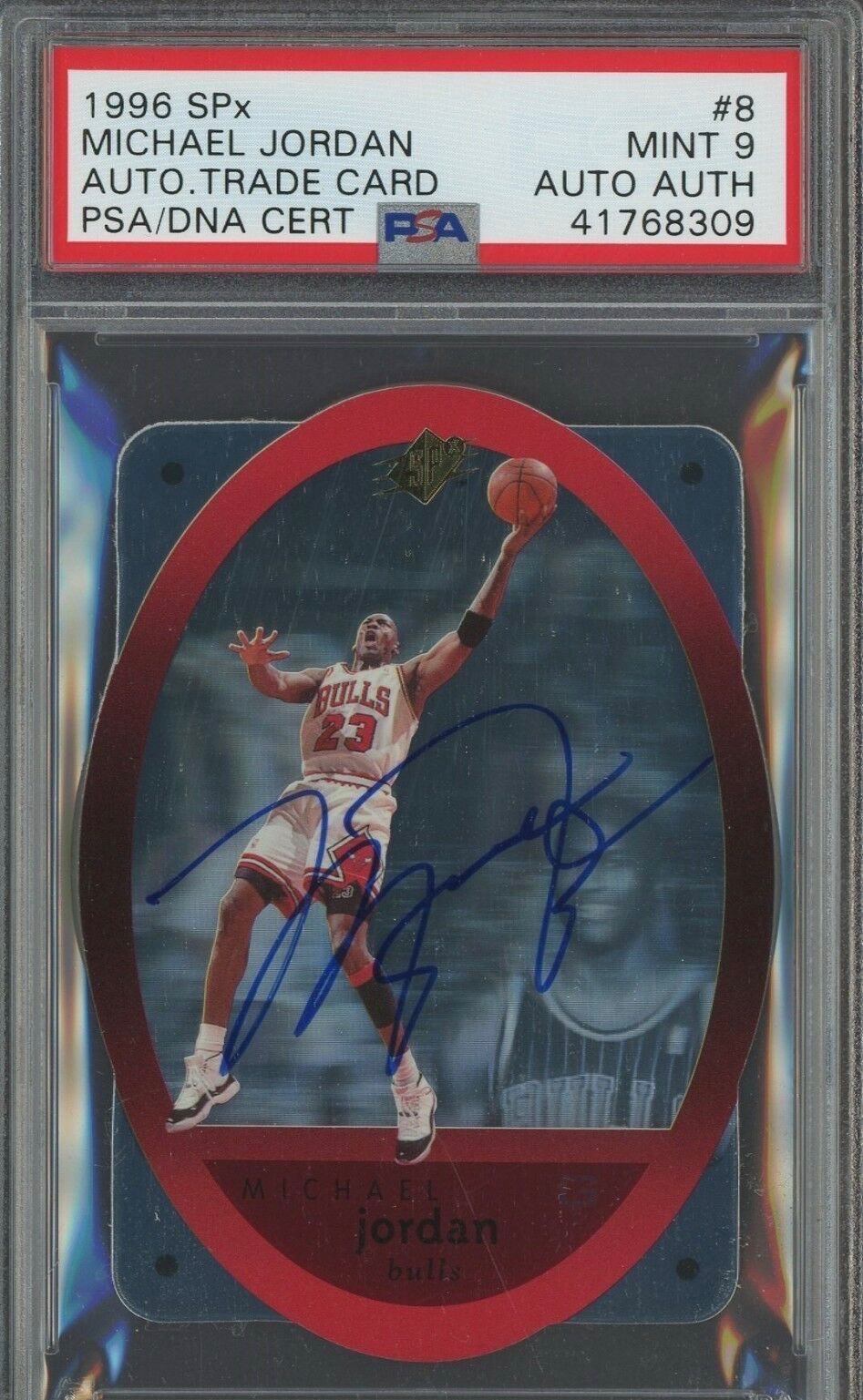 This card is regarded as Jordan’s official first on-card certified autograph. The card has an awesome hologram design and Jordan’s bold signature is featured in the middle of the card. These were very difficult to obtain and being so that this was his first on-card autograph card means that this card will always have tremendous long-term value. A very difficult card to obtain as these were very limited and rarely pop up for sale nowadays. 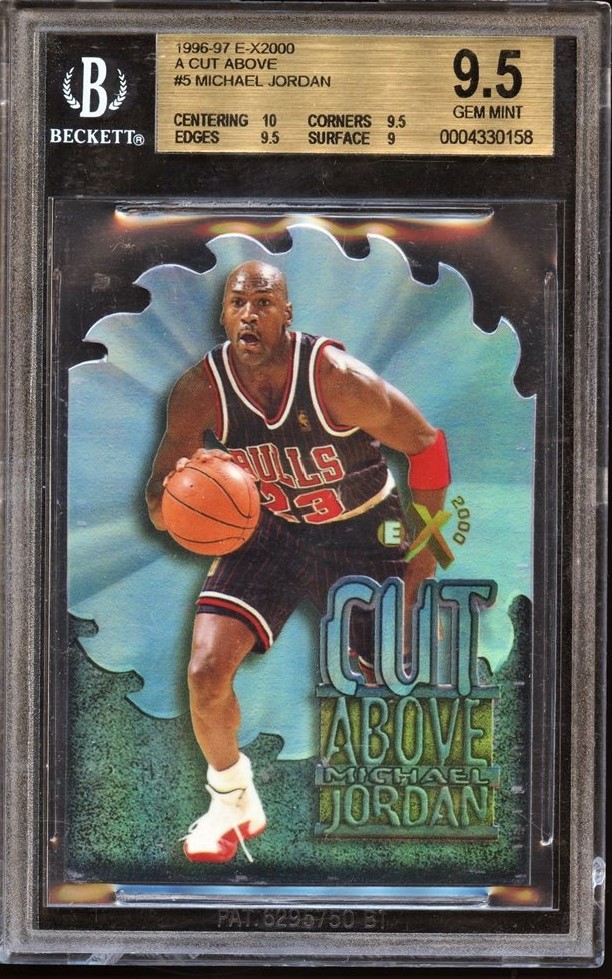 One of the more unique Jordan insert designs ever created was his 1996-97 Cut Above. The card features a die cut card with multiple cuts at the top. This insert card of Jordan has always been one of his most popular because of its shine and uniqueness. Jordan’s cut above insert still has plenty of room to increase in value and will only become tougher to find each year. 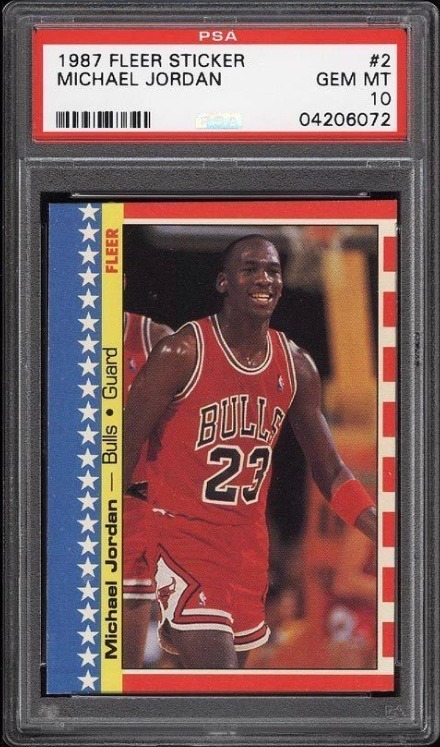 Jordan’s second Fleer sticker card of him is from 1987. Since Jordan’s Fleer Sticker from 1986 has seen a huge increase in value his second year sticker has also seen a big increase as well. This card has a lot of room to grow because his first year sticker card has become so expensive for collectors or buyers especially in high-grade examples. Investing in his second year sticker is a smart decision because this card of Jordan is still very obtainable for many collectors and one of his earliest cards produced of him. 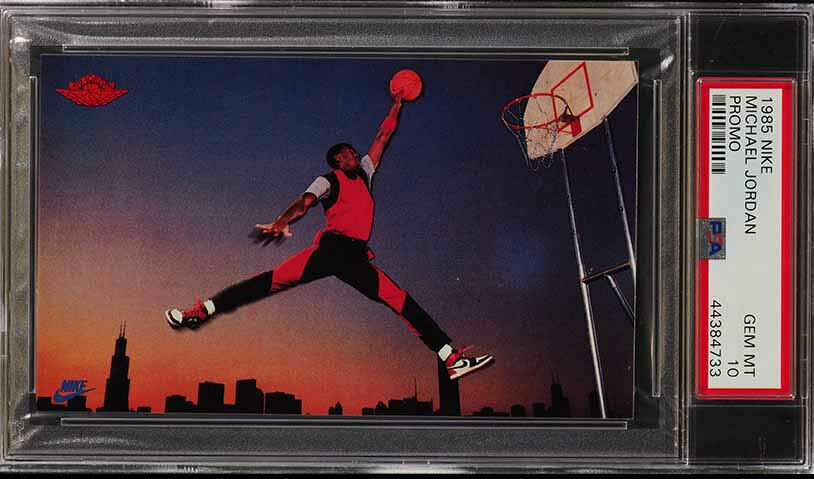 Jordan was featured in 1985 on a rare Nike oversized horizontal card. This card of Jordan was featured from a full set along with other Nike star athletes at the time. There has only been 148 of these that have received a PSA 10, which means this card is very undervalued in a high-grade example. Many collectors or buyers who buy Jordan have not caught on to yet to this rare card of him as this will continue to increase in value since it’s very difficult to obtain in a high-grade example. Buying the sealed set is another great strategy as you easily could get a Jordan from the set in mint condition.

Which Jordan card from this list will increase in value the fastest? Which one is that you would want to own for your collection?