The 2019-2020 NBA Basketball season has started off with plenty of excitement. LeBron James is paired up with Anthony Davis on the Lakers, who is arguably the most talented teammate he has ever played with. Luka Doncic in just his second year has taken off recording many triple-double performances. Trae Young also in his second year continues to draw comparisons as “the new Steph Curry” because of his great 3-point shooting ability. Giannis Antetokounmpo “The Greek Freak” and “The Beard” James Harden continue to be the league’s best scorers and many new breakout players have also emerged. In terms of basketball players relating to sports cards Prizm Silvers rookies and star players featured in other Prizm Silver years continue to dominant as the go to cards to collect for newer basketball players. Since Prizm Silvers have become so sought after on many star NBA basketball players even similar Silvers on other cards are beginning to sell and continue to increase in value daily. A few examples would be Donruss Optic Silver and Panini Select Silvers. I will provide you with a top 15 list of basketball cards that have seen the biggest increase in value during the 2019-20 basketball season. 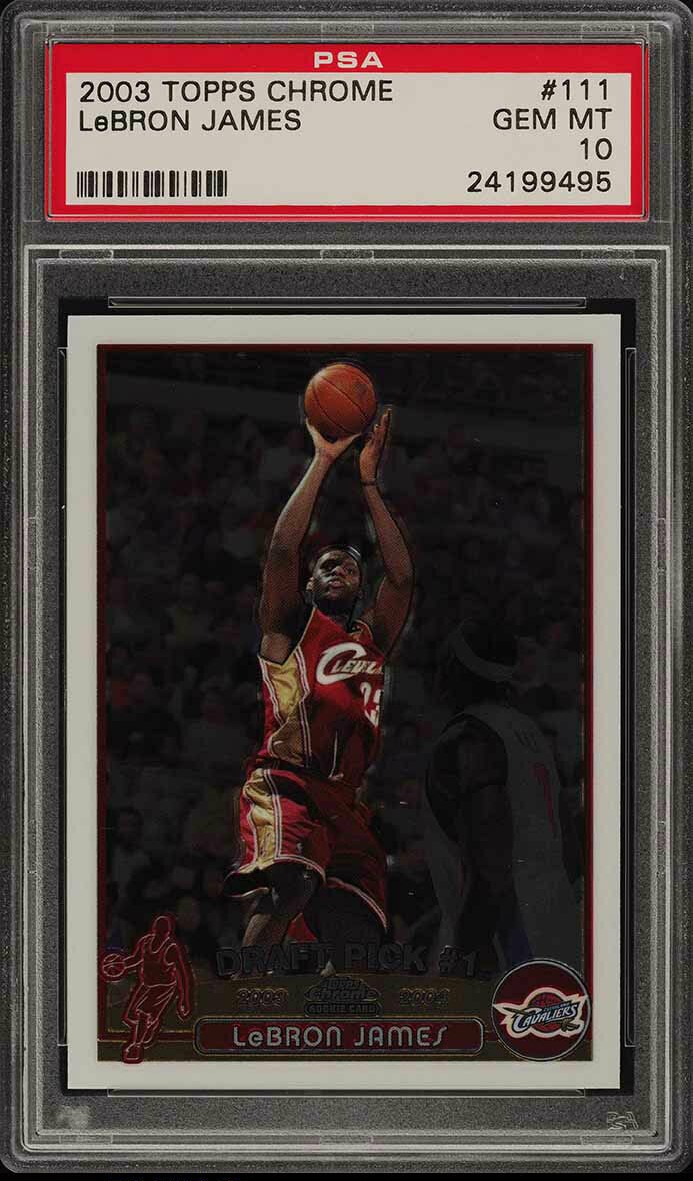 LeBron James rookie in a Topps Chrome was steady for about a year in terms of value. Beginning in the summer of 2019, the card suddenly exploded in value especially in a PSA 10 and BGS 9.5. Many people believe entrepreneur Gary V. caused this sudden explosion on LeBron’s Topps Chrome rookie card. There is multiple videos of him at the National Convention in late July of 2019 and into early August projecting the future value of LeBron’s Chrome rookie card in a PSA 10 and I think many people agreed with his assessment and bought LeBron's card right away. Since many collectors or buyers were beginning to buy the card in bulk or trying to get as many as they could, other sellers soon realized many of these were selling and this immediately drove the price up on all LeBron James Chrome Rookies. There is already people projecting LeBron to become the all-time leading points scorer so his Chrome Rookie card still easily has room to increase in value and the Lakers could make a run at a NBA Championship too for the next couple of years. 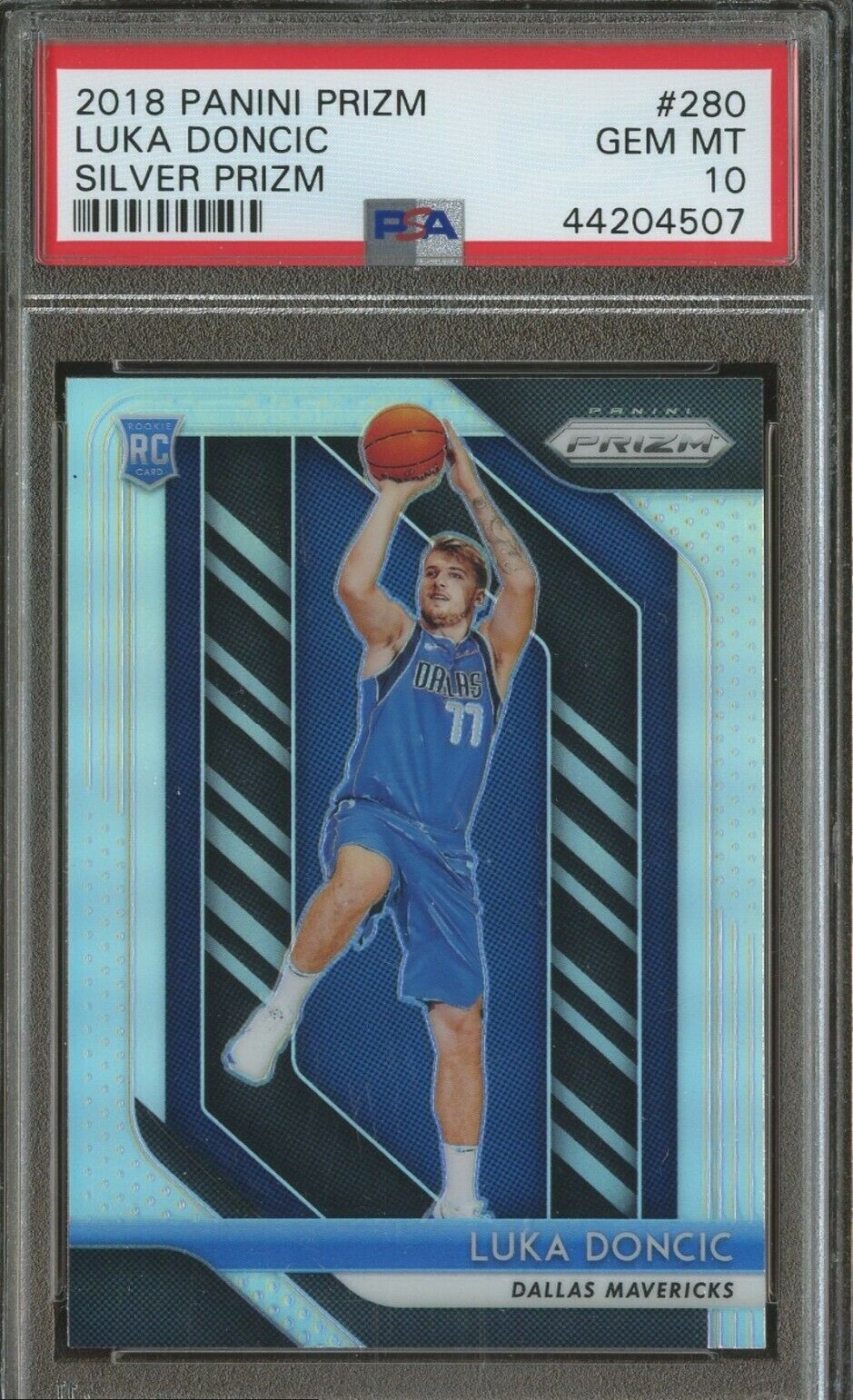 Luka’s most popular rookie card continues to be his Prizm Silver rookie. Doncic has dominated to start the year including a 40-point game with a triple-double and multiple other triple-double type performances. The result of his amazing play to start the season has seen his Prizm Silver rookie take off again in value. Many collectors or buyers would have never predicted this historic increase. His Prizm Silver will remain as his most collectible rookie card, can Doncic keep up this historic start? He is still only 20 years old! 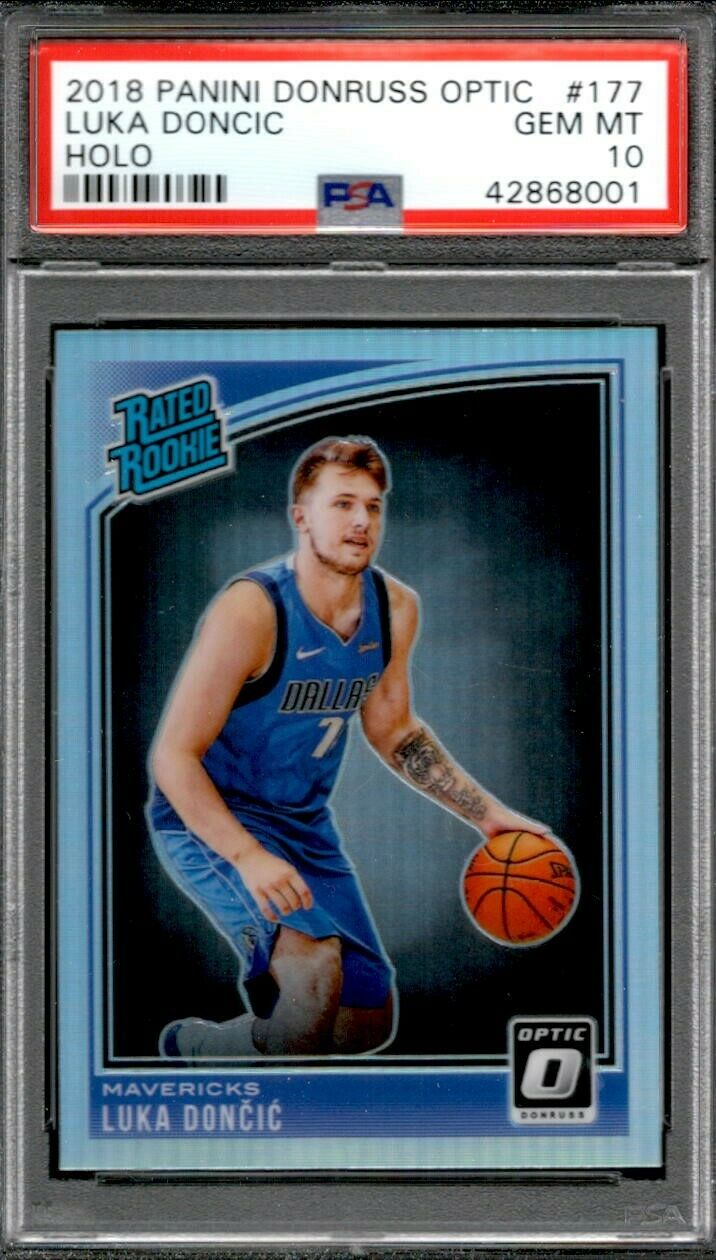 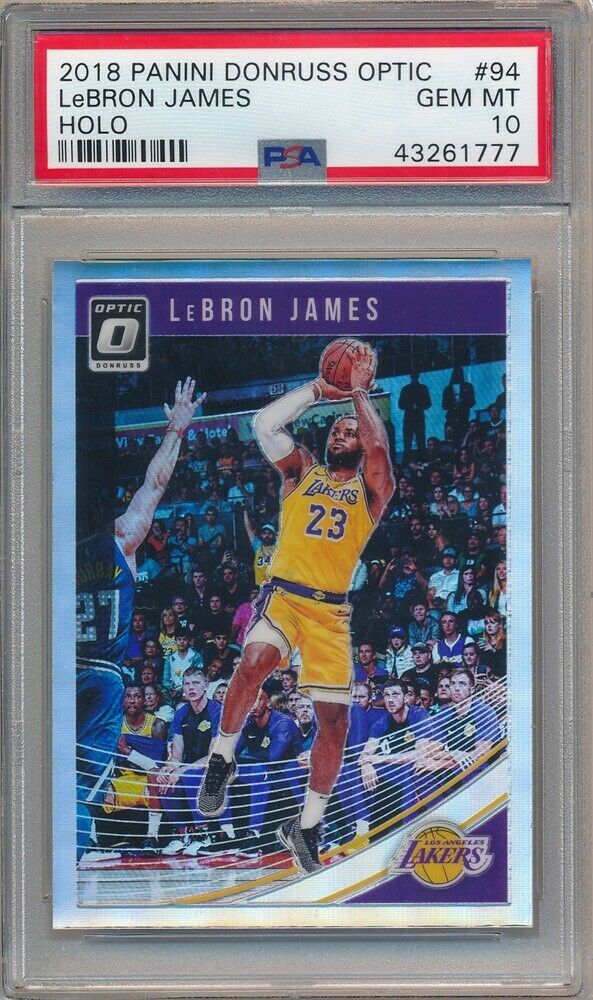 One of the trendiest cards this basketball season is LeBron’s Optic Silver from 2018-19. The reason this card has become so sought after is because it’s one of LeBron’s first Silvers of him featured in a Lakers uniform. The card is considered a short print and insert card, since many other Prizm Silvers of LeBron have become really sought after of him since dating back to 2012 many buyers or collectors are beginning to invest in his Optic Silvers similar to this one. Optic Silvers first originally released in 2016 and being so that this particular one is one of his first Silvers of him in a Lakers uniform makes this card very sought after. This card will always have great long-term value and will be considered one of LeBron’s most collectible cards in a Lakers uniform. 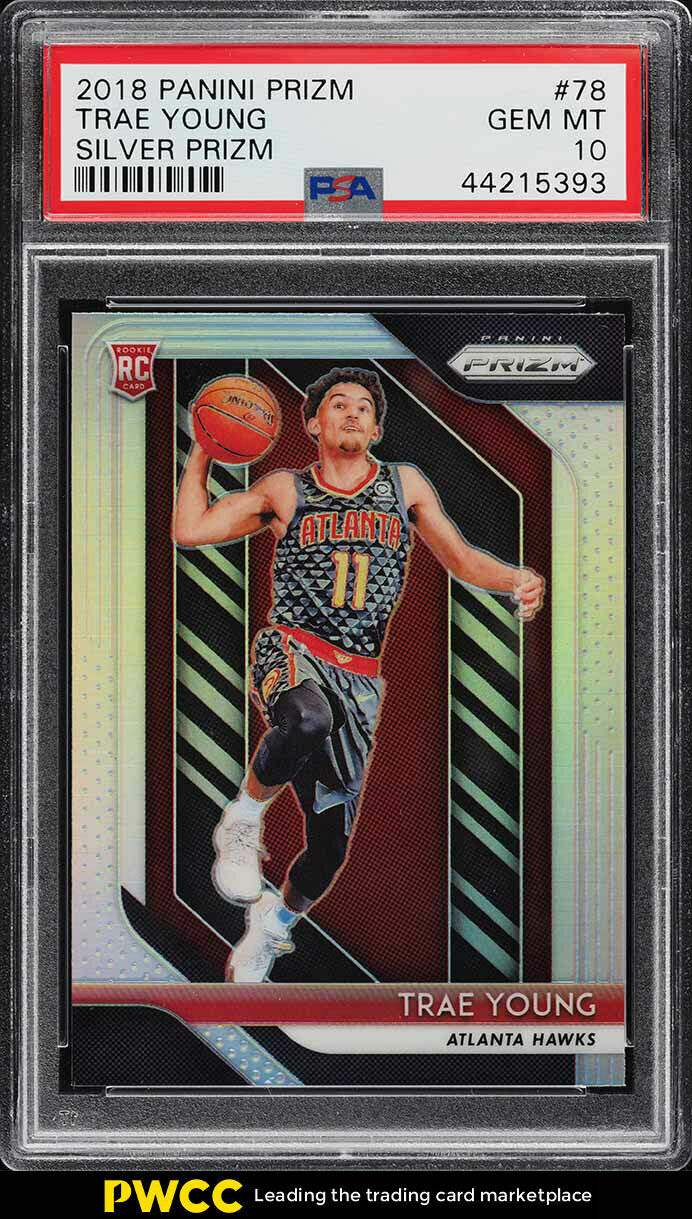 One of the new and exciting players in the NBA in just his second year is Trae Young. Young is a very similar player to Steph Curry in a sense that he shoots the ball from three very well. He has already had some monster games to start the season, and as a result his card increased a lot in value. Young’s Prizm Silver rookie has gone way up since the start of the season dating back to early October and this card is easily his most sought after. Young will be regarded as one of the bright young stars in the NBA so this is a great long term invest with still a lot of upside because of his great shooting capability. 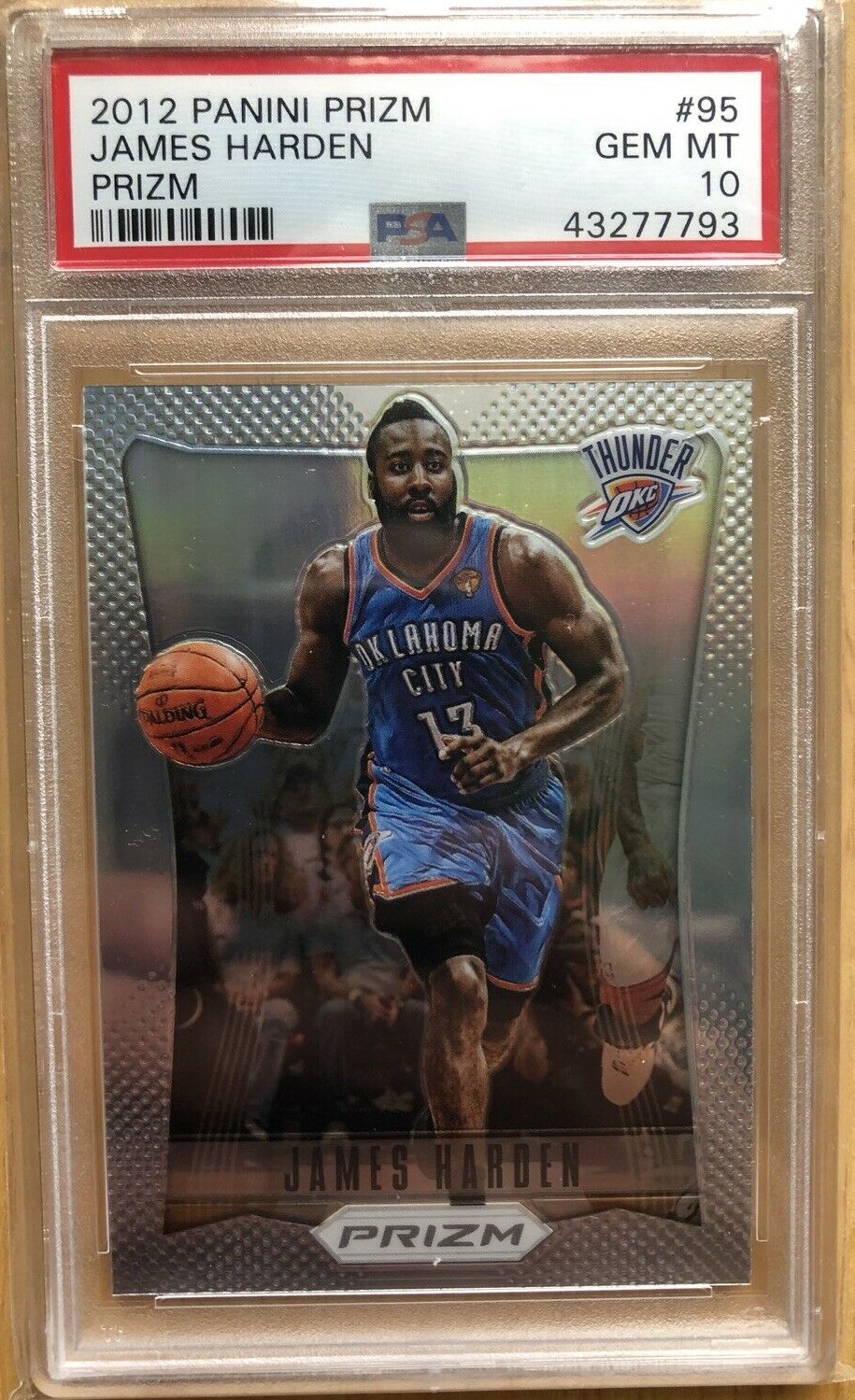 One of the biggest trends in buying or collecting in the basketball sports card hobby this season is buying star players featured in different years that have a Prizm Silver card. Prizm Silvers were first created in 2012 and each year more have been produced since when they first released. The ones from 2012 are becoming increasingly difficult to find especially this one of Harden which has a very low PSA POP report. I have seen many basketball collectors trying to buy a Prizm Silver card from every year of a certain player so an example would be 2012-18 you would want to try to obtain all eight cards featured of a certain player, especially in high grades examples. Future Hall of Famers in Silvers will be considered short prints and hold great long-term value over time. Earlier Prizm Silvers are great investments as these trends on buying star players featured in all years will certainly continue in the basketball hobby. 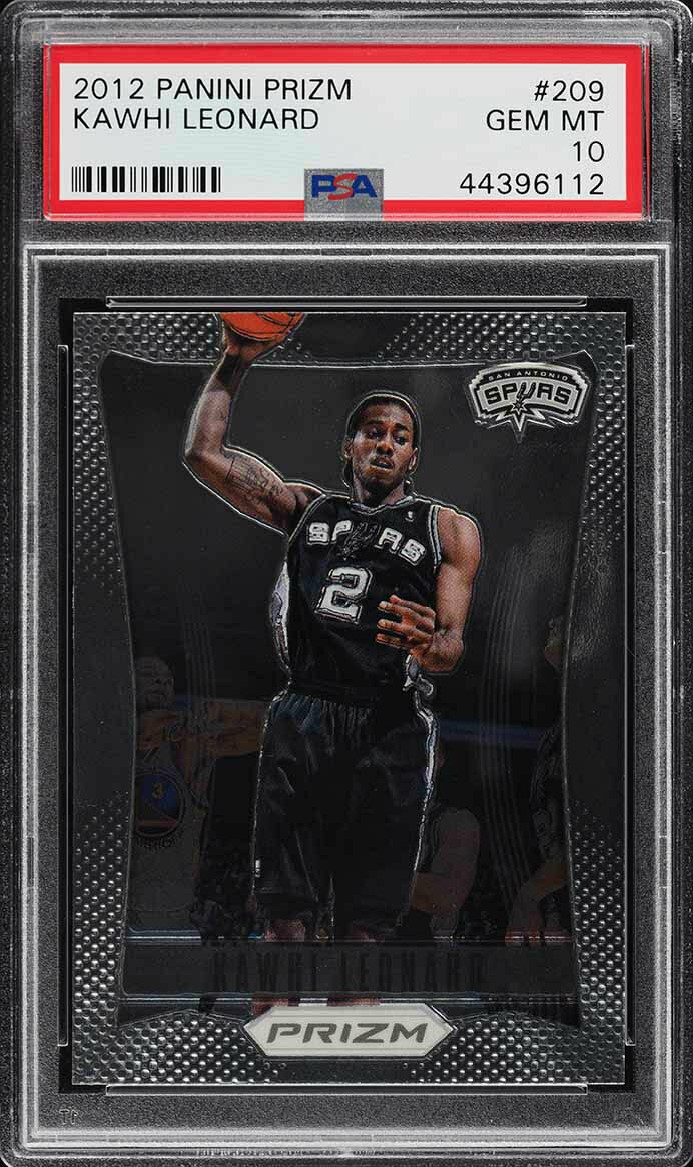 Base rookie cards in high-graded examples on star NBA players continue to soar in value this season. Leonard since winning the NBA championship with the Raptors in June of 2019 has been one of the most expensive base Prizm rookie cards that collectors or buyers have buying at the start of the 2019-2020 season. Other star players similar to Leonard featured in a base Prizm rookie graded a PSA 10 or BGS 9.5 are continually increasing in value. Will Prizm base rookies graded in high examples continually go up in value this season? Which player would you buy in a base Prizm Rookie in a high-grade example? 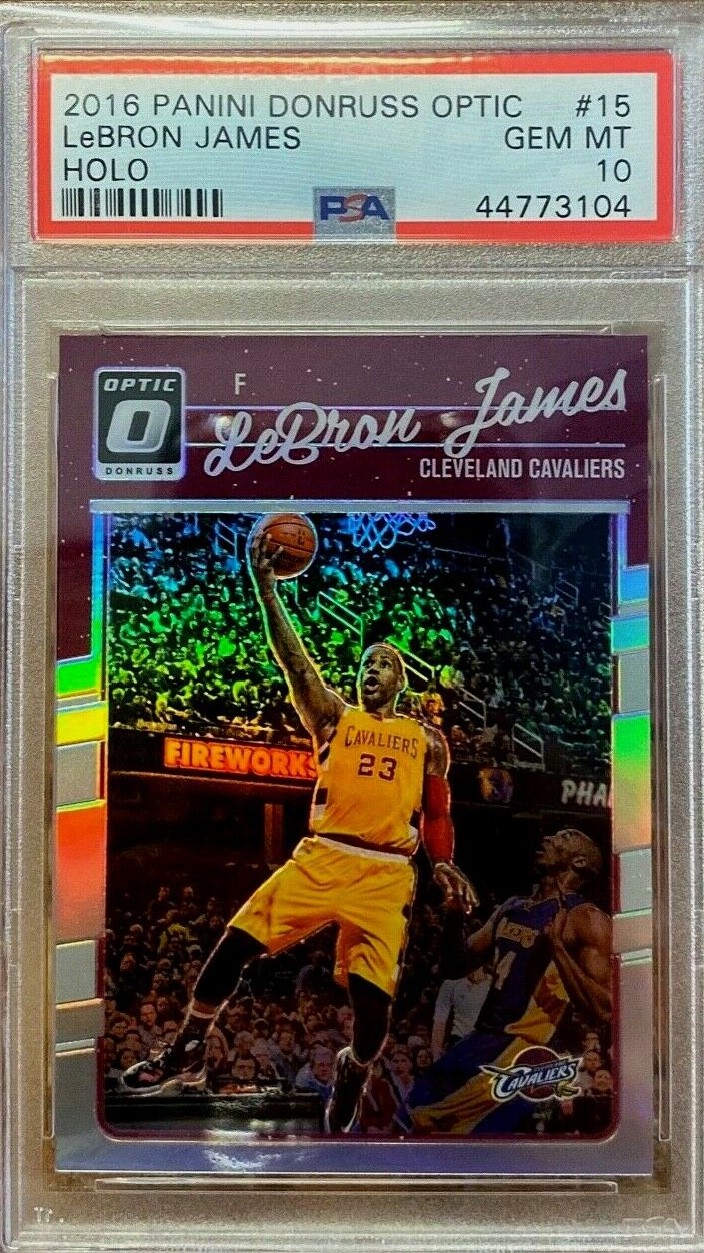 One other Optic Silver card that has seen a huge increase in value this NBA season is LeBron James’s Optic Silver. This card is regarded as LeBron’s first Optic Silver card and for that reason alone has sparked this huge new interest in this card from collectors and buyers. The card features Kobe Bryant pictured off to the side too. This card will continue to gain more hype and exposure because it is the first of its kind featured with LeBron on it! 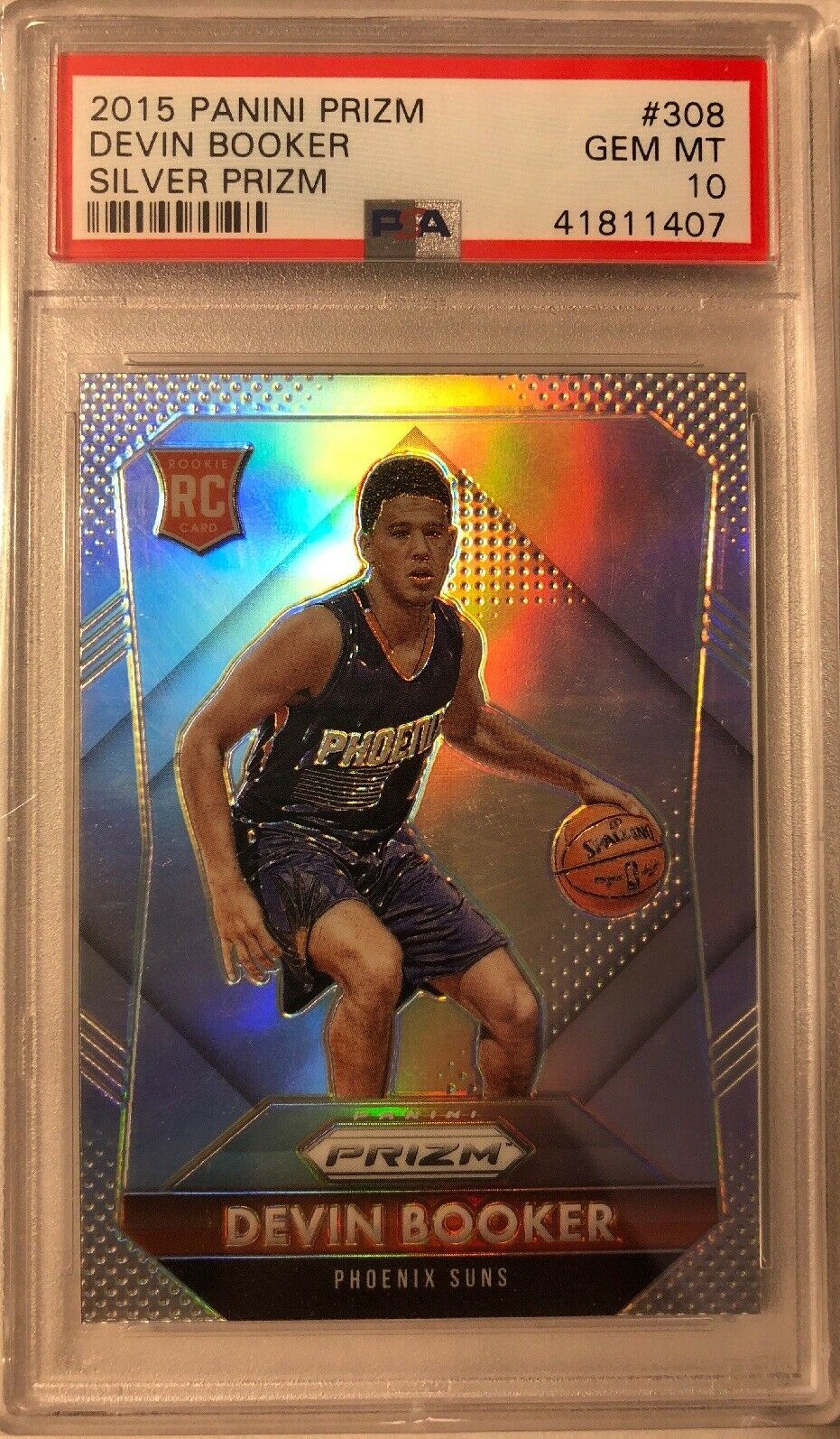 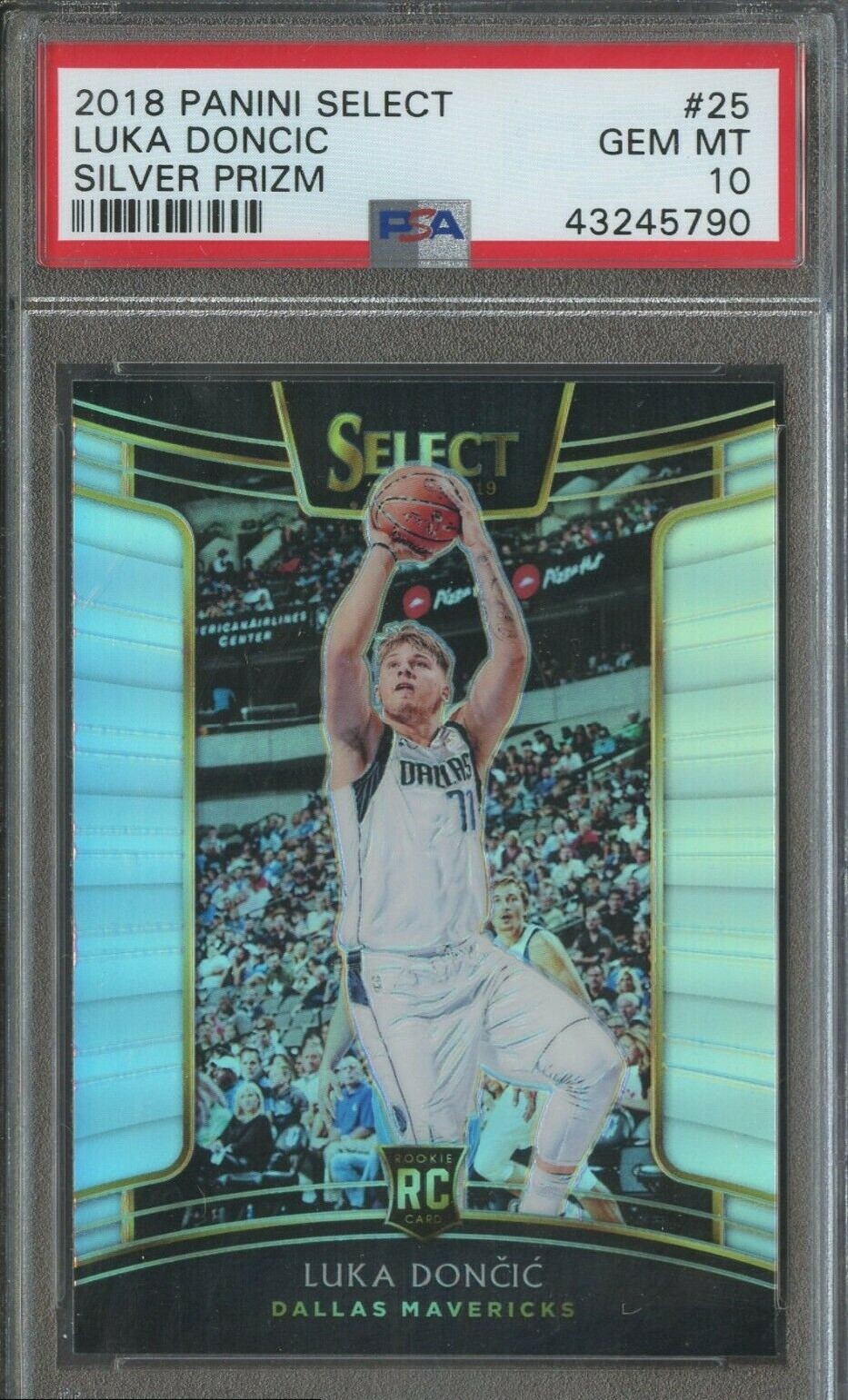 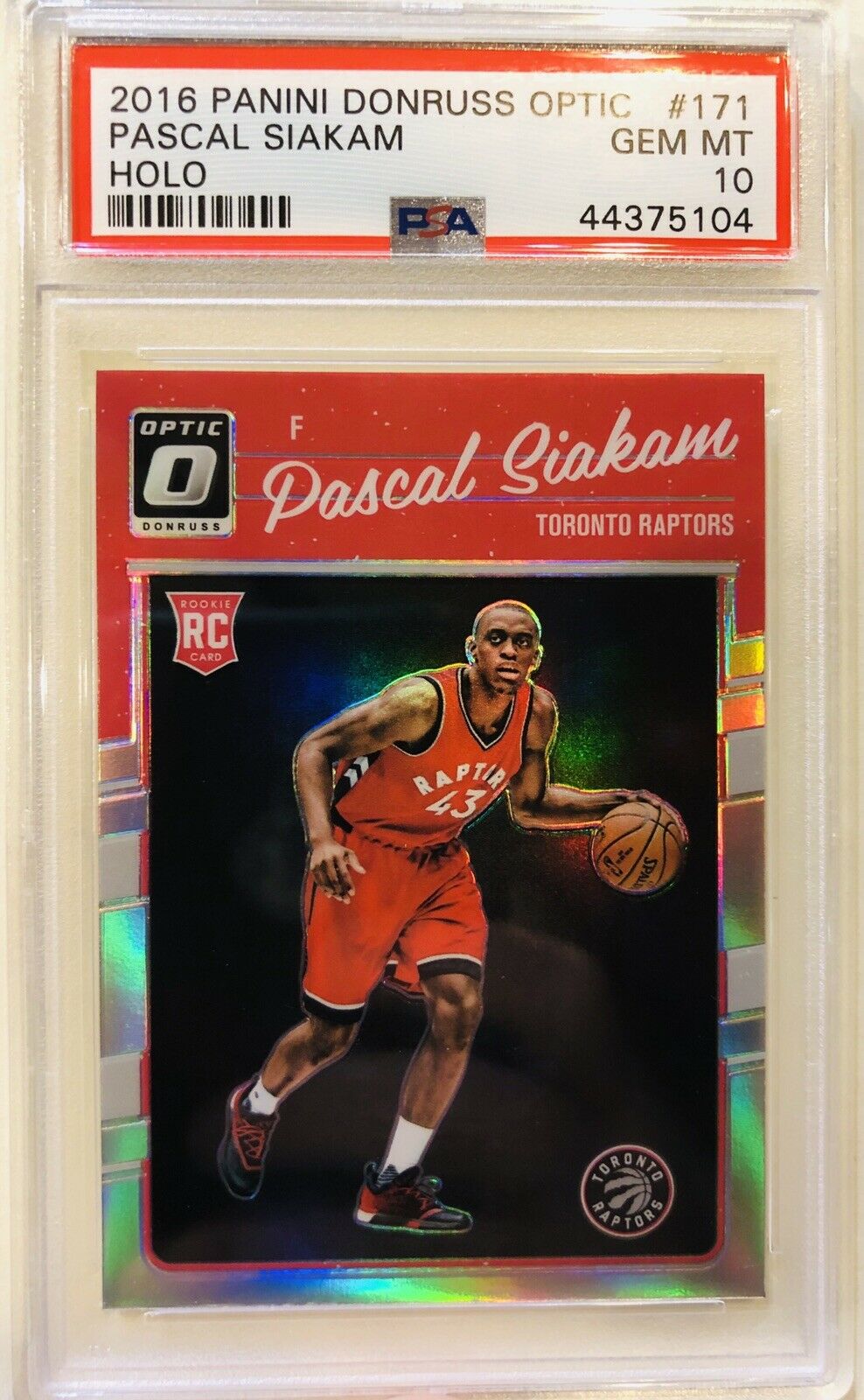 Siakam since last season has gone from as being one of the most unknown players in the league, to now regarded as one of the best players in the league. His Optic Silver rookie has seen one of the biggest increases in value since the beginning of the NBA season. Collectors or buyers quickly invested heavily in his Optic Silver as his second best option. This year was also the first year Optic Silvers were created and being so that this one is a rookie card adds a lot more overall value. Siakam has all the talent to maintain his current value! 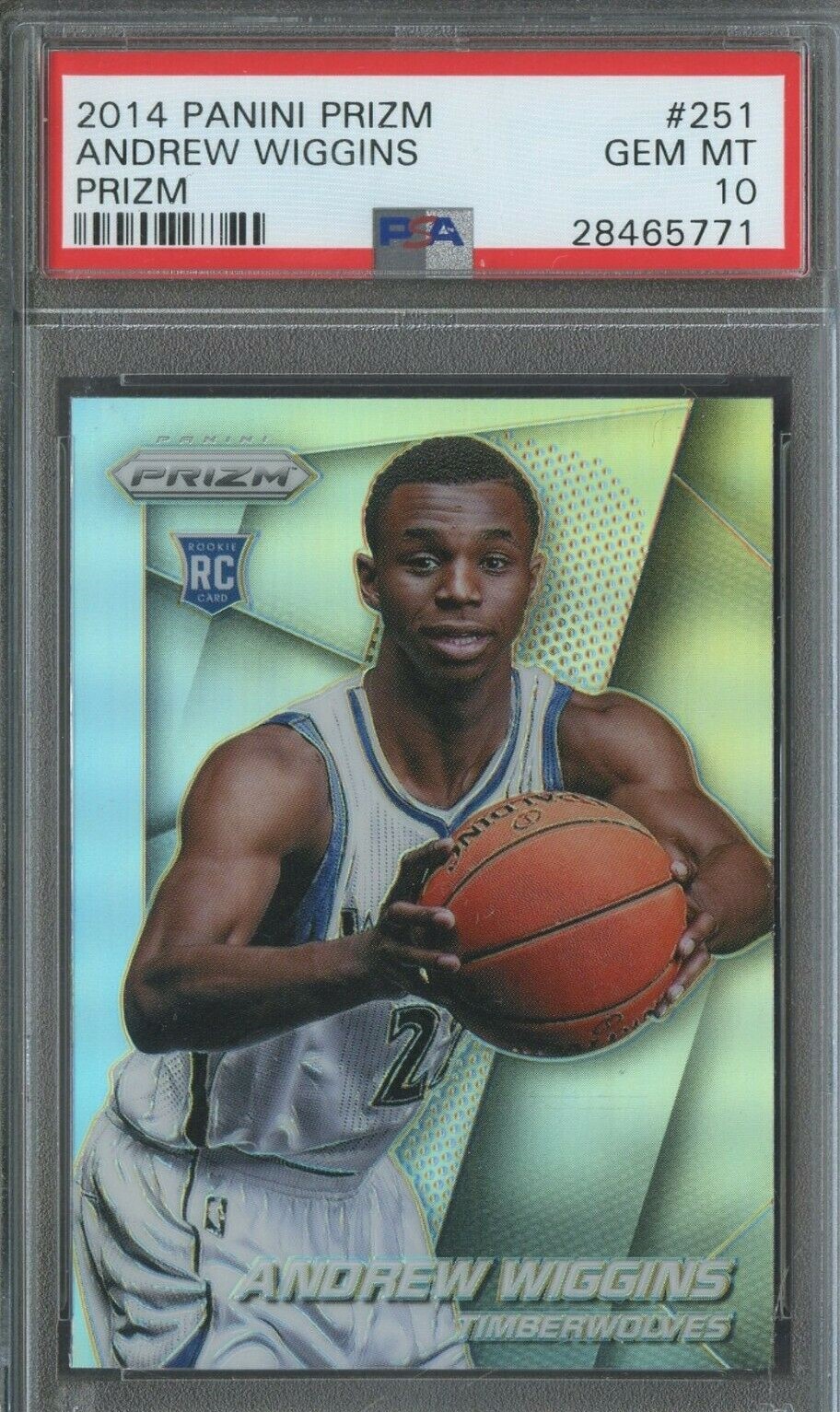 One other breakout player that is finally living up the hype is Andrew Wiggins. Wiggins is having his best season so far in his career, he is averaging nearly 25 points per game and already had some great games to start the year. Since Wiggins has played so well many collectors or buyers are finally buying into the hype of him again as his cards have reached all-time highs. Can Wiggins Prizm Silver continue to increase in value? 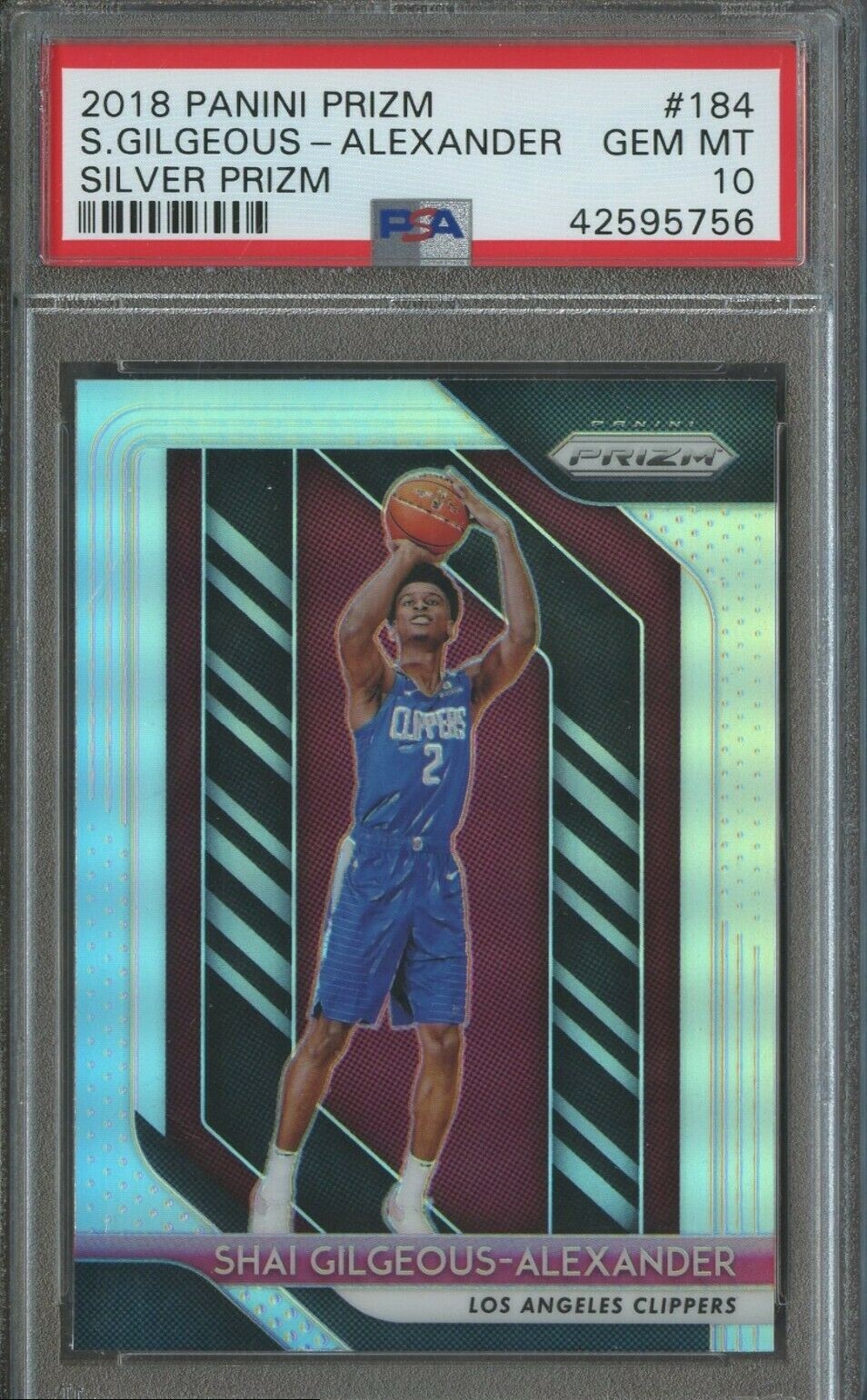 Gilgeous-Alexander in just his second season was traded to the Oklahoma City Thunder this off-season. He has quickly shown his great shooting and scoring ability. As a result, his Prizm Silver rookie has nearly tripled in value since the start of the season. He is already being regarded as one of the best young shooting guards in the league. Gilgeous-Alexander’s Prizm Silver rookie still has a lot of upside to continue to increase in value. 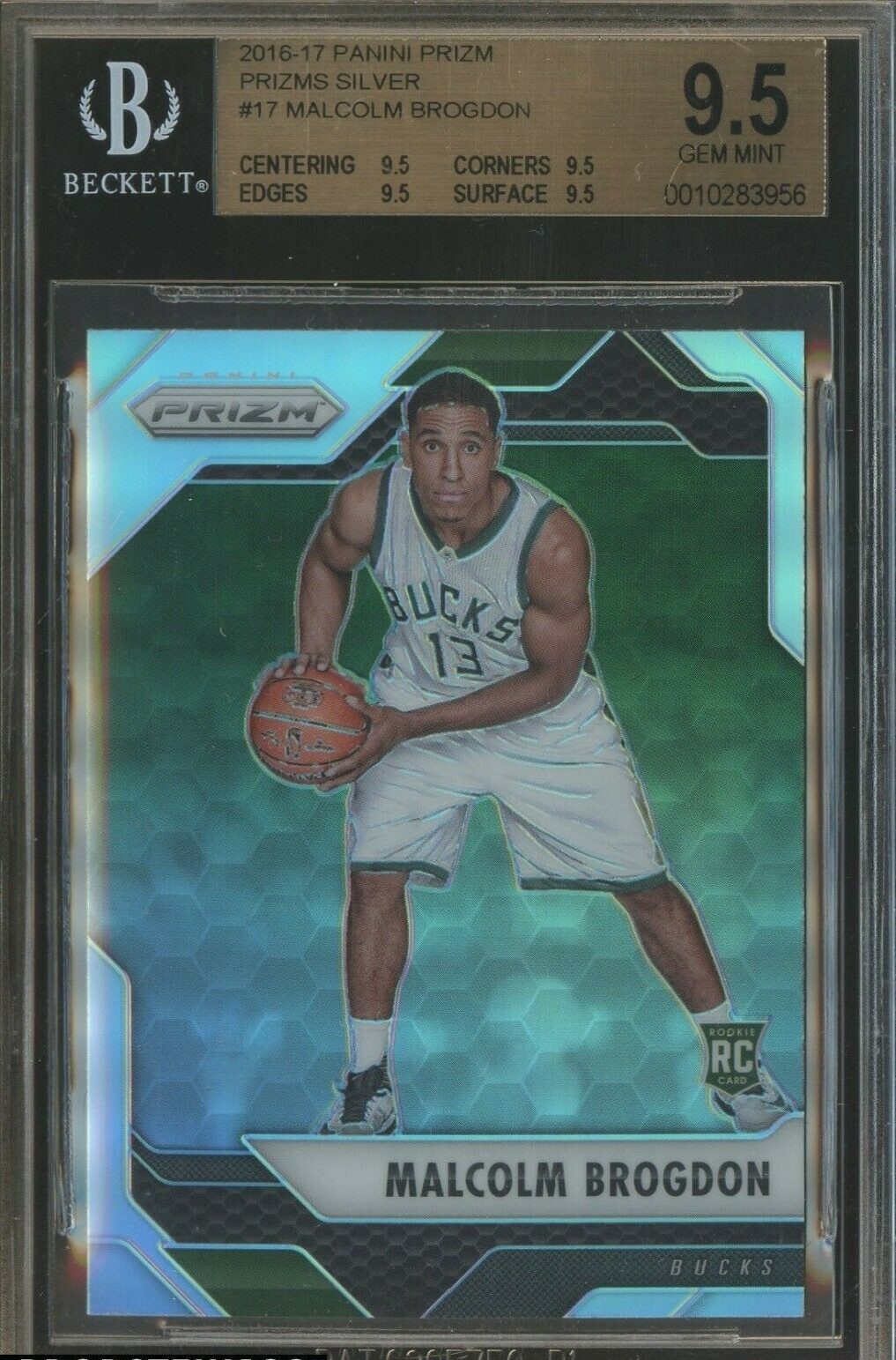 Brogdon signed as a free agent with the Indiana Pacers this off-season. Brogdon has quickly impressed and is averaging nearly 20 points a game. His Prizm Silver rookie was a great buy low at the start of the season. This card has quickly increased in value but still has a lot of upside to continue to go up more in value. I think he is still one of the more underrated players in the NBA and can still easily increase more in value. 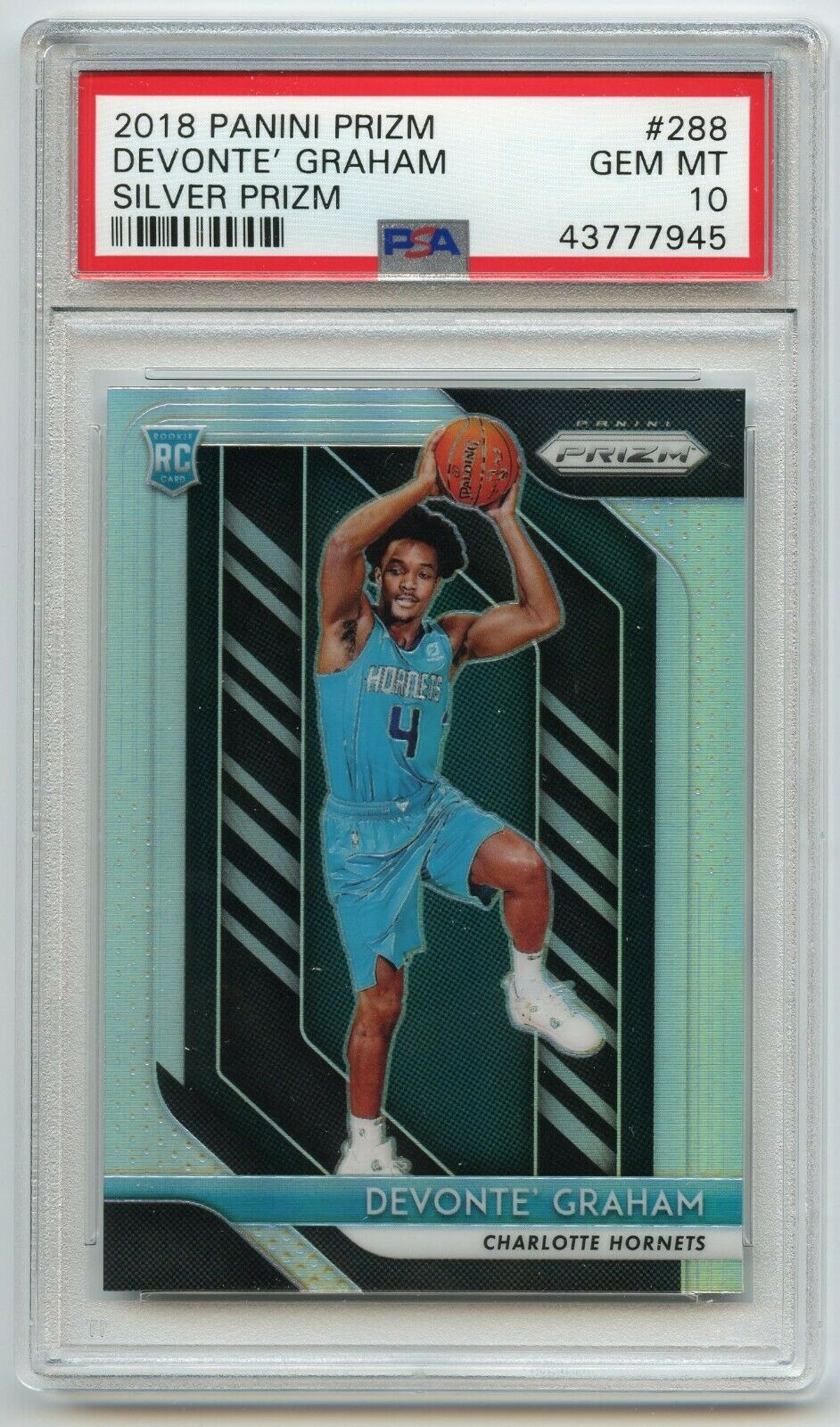 One of the biggest surprises this basketball season has been the play of Deveonte’ Graham. Graham has taken over as the starting point guard role on the Charlotte Hornets and is averaging nearly 20 points a game to start the season. His Prizm Silver rookie is still very attainable for many buyers or collectors in both ungraded and graded examples. Will Graham continue to play at a high level?

Which Basketball cards do you think will increase next during the 2019-20 season? 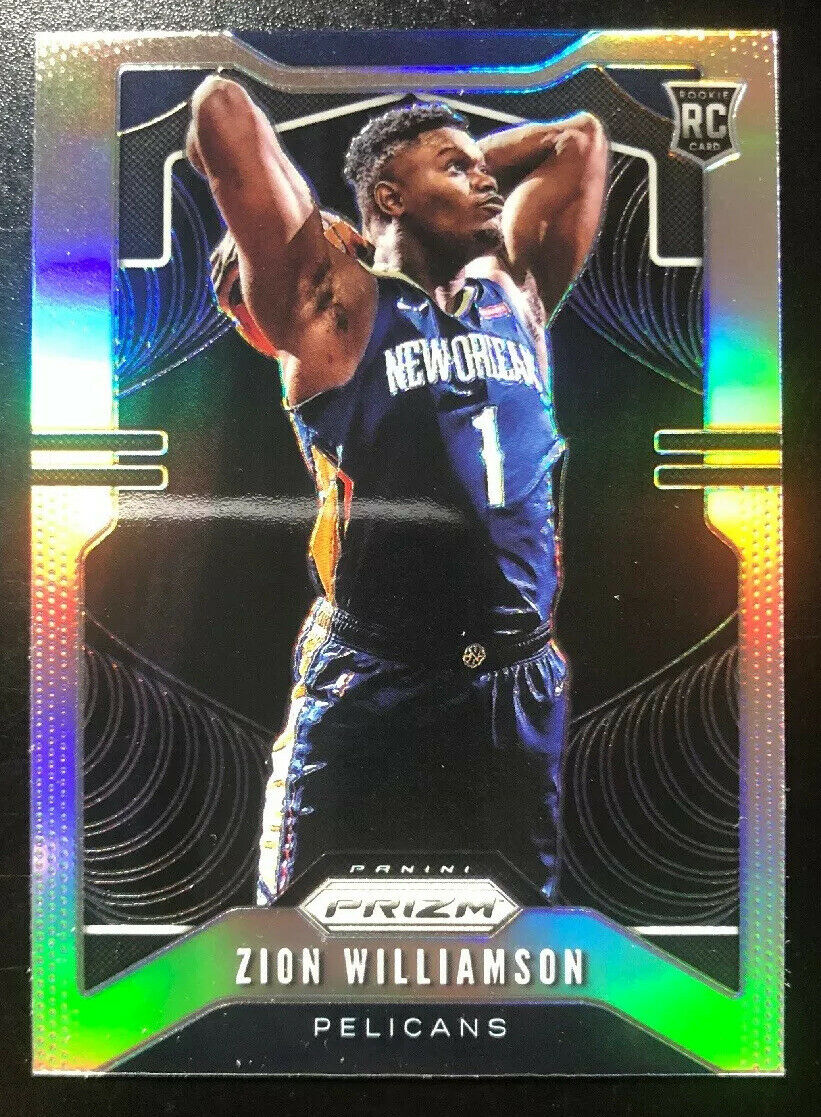 2019-20 Prizm Basketball is set to release around early December, those boxes will be extremely sought after especially with the hype of Zion Williamson’s rookies featured in the box and other new rookies like Ja Morant, RJ Barrett and more! Zion’s Prizm Silver rookie will no doubt be insanely sought after! Blaster boxes, Mega Boxes or Retail boxes will be available at Target or Walmart but those will often sell out really fast! You will want to check often for when they restock and easily could pull a Zion Prizm Silver rookie out of one of those boxes that you could buy for in the $20-35 range out of one of the boxes. Last year blaster boxes were $20, Mega $35 and Retail $75 range. Hobby boxes will easily be $350+, Zion’s Prizm Rookie Silver ungraded is projected to be $700+ when it first hits the market. This year at the first initial release on these boxes will be a lot higher on the secondary market. The demand for them at the initial release will easily live up to the hype…look for them in early December!