Zion Williamson has received a ton of hype since he was a high school star basketball player just two years ago. Williamson was one of the most talked about high school athletes of all-time, he is best known for his insane dunks and tremendous athletic ability. He played one year at Duke and many basketball experts were saying Williamson was one of the best players ever to put on a college uniform. He would make the transition to the NBA and was drafted number one overall in the NBA Draft in June of 2019. Since he was drafted, many collectors could not wait to get their hands on some Zion rookie cards. “Zion Mania," “Chase for Zion," and 'Hunt for Zion” has often been referenced this basketball season when pack rippers have been opening basketball packs from 2019-2020 season in hopes to pull a Zion card. Williamson made his long awaited NBA debut on January 23, 2020 and prior to his debut many of sports cards sold for record prices! Since his debut he has lived up to the hype thus far averaging nearly 20 points and 8 rebounds per game.

Here is our Top 20 most popular or sought after Zion Williamson cards thus far. 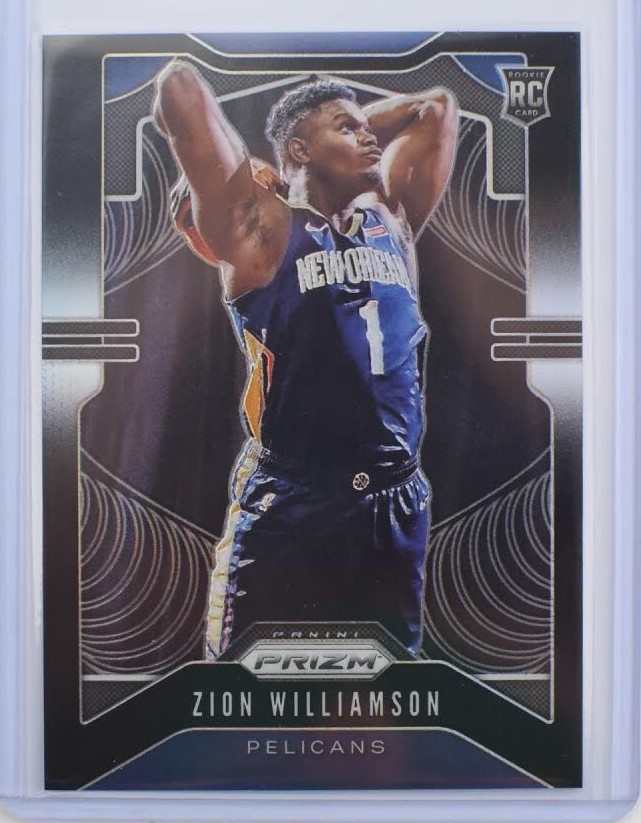 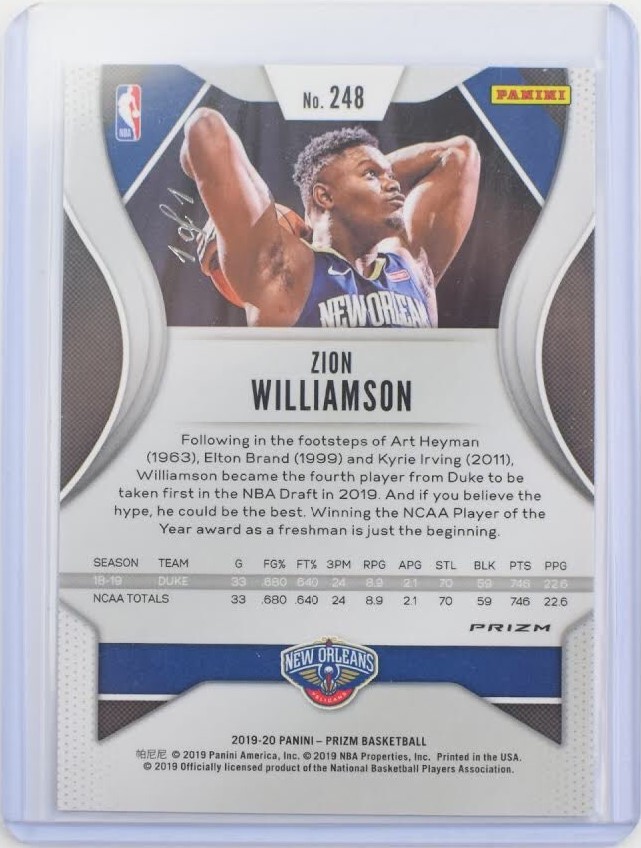 Zion’s Prizm rookie card with a Black color theme and serial numbered 1 of 1 is considered the Holy Grail of Zion Williamson cards thus far. This card has already been estimated at being worth more than $100,000 according to Fox Business. This card received a lot of hype and exposure throughout a number of media outlets and many people are wowed by how much this card is actually worth. Can this card continually increase in value over time? Which card of Zion’s next will reach the levels of this card? 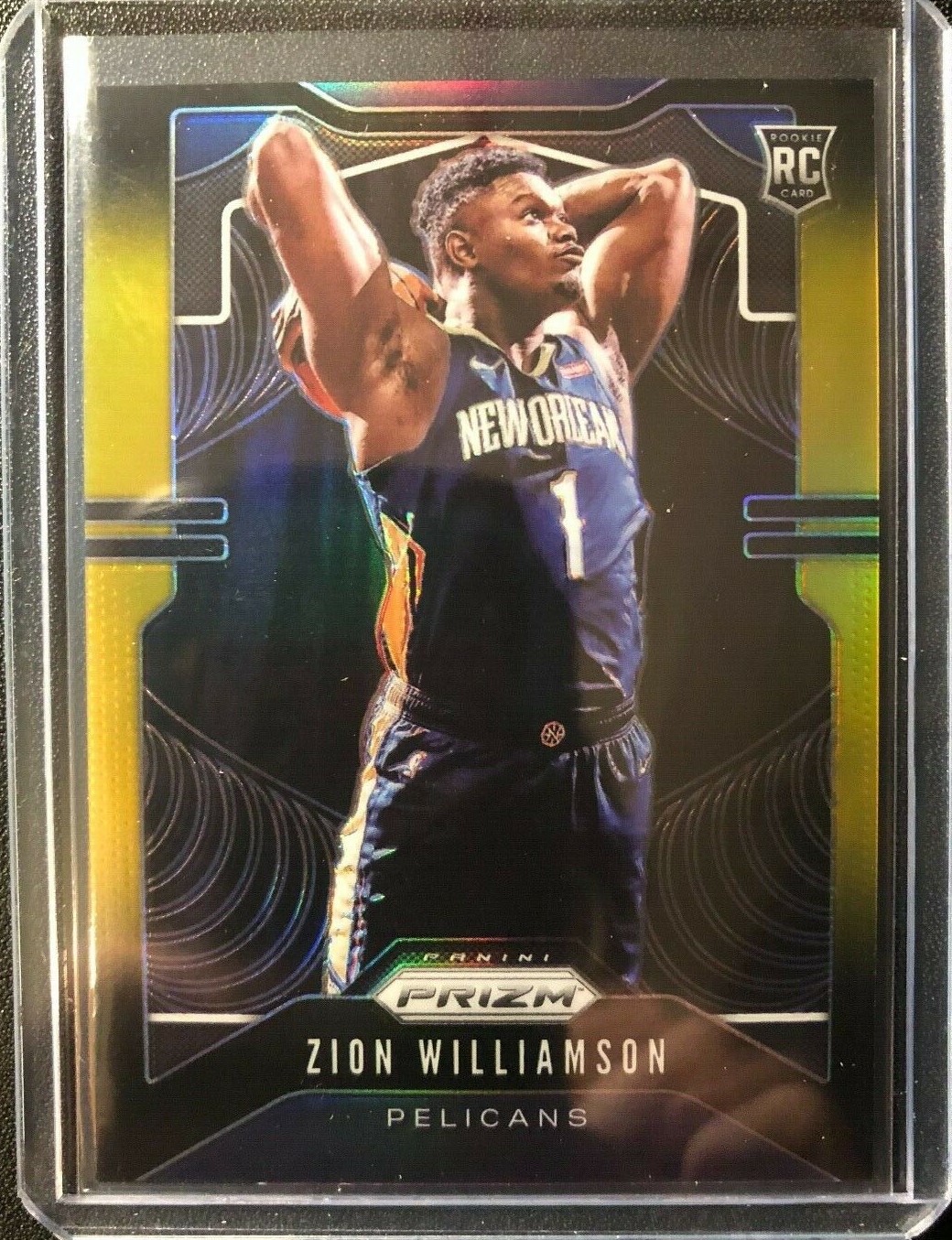 One other rare color themed Zion card was his Black Gold Prizm Rookie serial numbered 1/5. Zion wears jersey number 1 so the demand for this card was a lot more sought after because the card correlated with his jersey number. This Zion card thus far has sold for one of the highest amounts approaching nearly $30,000 at eBay auction in late December. 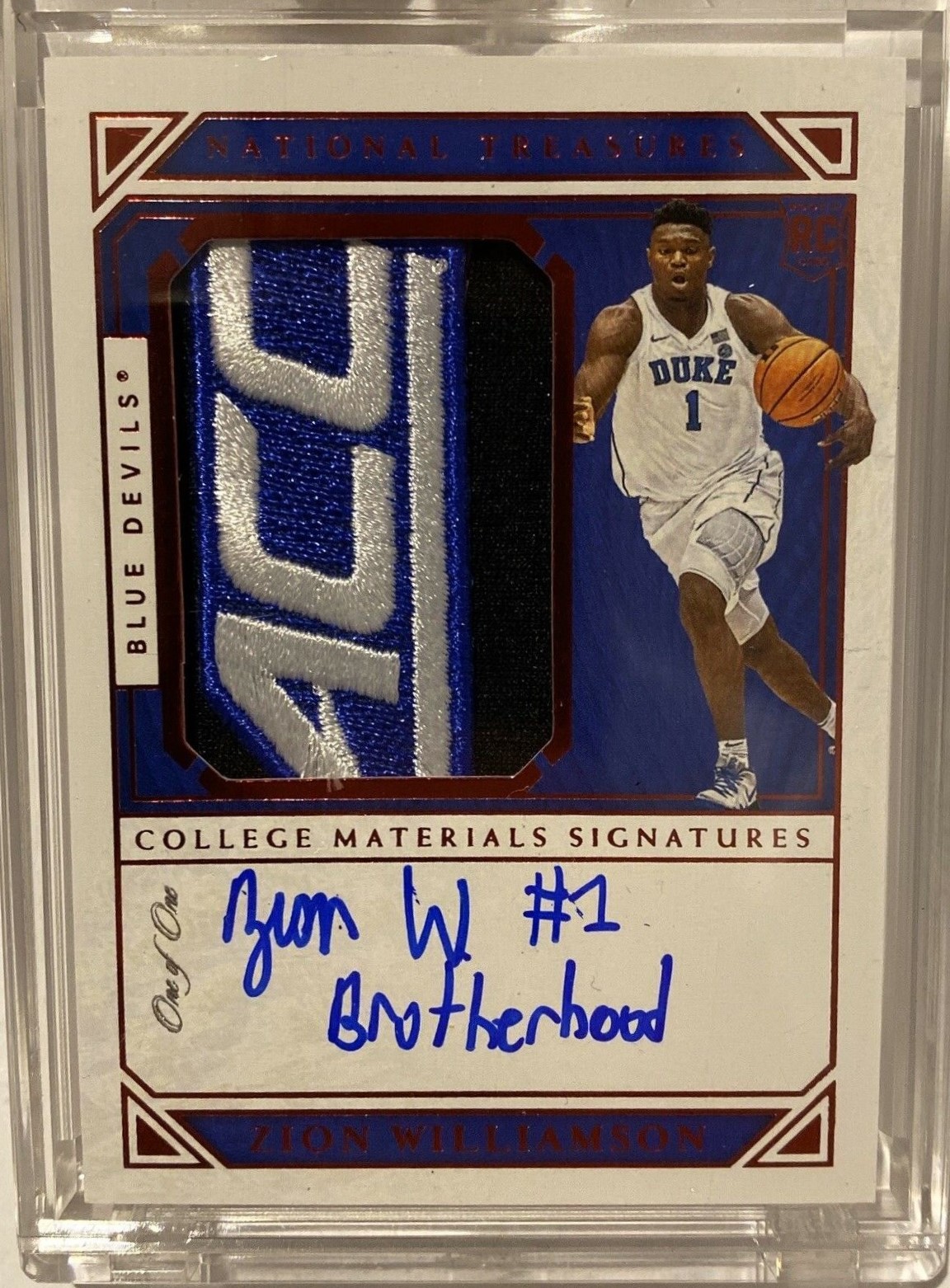 Zion’s National Treasures Autograph Rookie card features him in his Duke uniform. This card is featured with a huge ACC patch, and being so that this card was a 1/1 and autographed creates great long-term value. Zion also wrote a rare inscription writing brotherhood inscription and wrote #1 along with his signature. NBA licensed National Treasures will come out later in the basketball season but this one will always be regarded as one of his first National Treasure cards that were produced. There is also other similar National Treasure autographed rookie cards of Zion featured of him in a Duke Uniform and more to come soon that will release of him in his New Orleans Pelicans uniform!

One of the first Logoman Patch Autographed rookie cards released of Zion is this Panini Absolute card. This card is very busy featuring many thick patches and logos along with Zions signature. This is a true 1/1 Zion card and has tremendous long-term upside considering this card is one of his first Logoman patches printed. 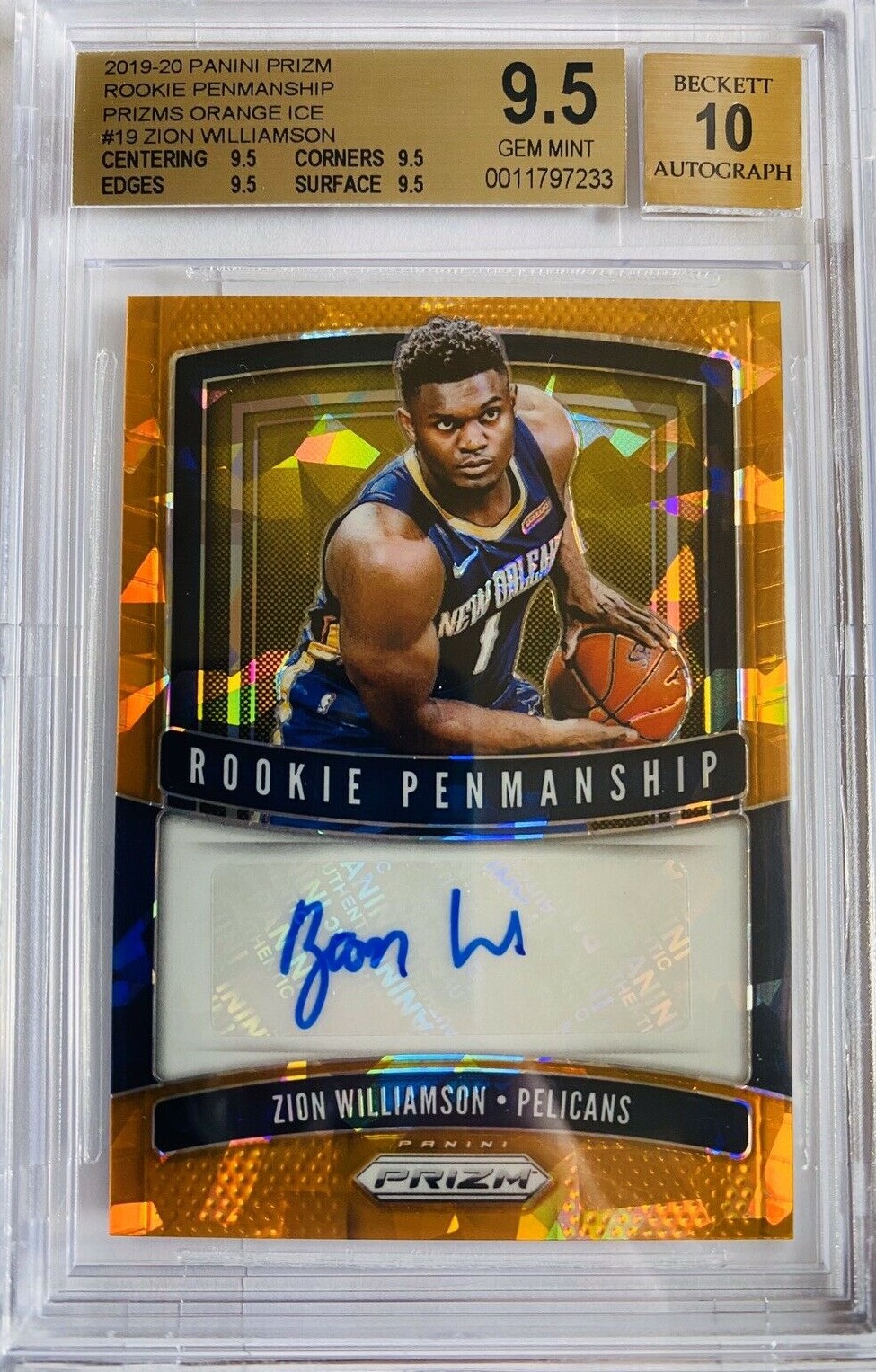 Zion’s also has a Prizm Orange Cracked Ice Auto Rookie. Cracked ice has become such a popular parallel that it is now featured in Prizm as well as Contenders. This card is very limited and short-printed however; unlike the Panini Contenders Cracked Ice, this card features a sticker-autograph instead of an on-card autograph. Some collectors or buyers strictly prefer buying on-card autographs versus sticker autographs because the card was actually signed on-card at a certain point from the player. Zion’s Prizm Orange Cracked Ice Auto is still highly sought after and will only become tougher to find in the coming years. 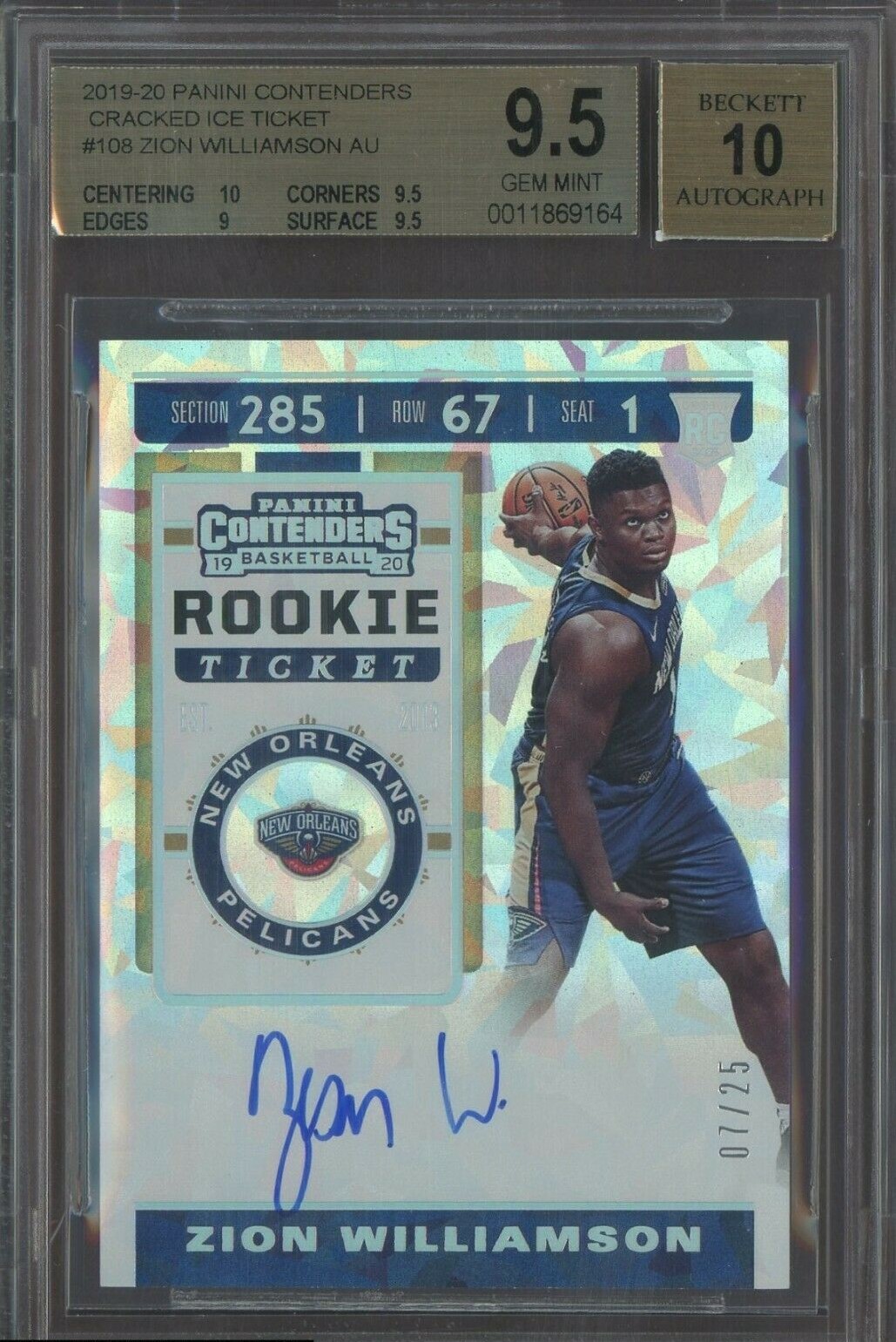 One of the most popular parallel autograph rookie autograph cards are Panini Cracked Ice Rookie Autographs. These cards are all serial numbered typically in the 20-25 range. This particular Autograph Cracked Ice rookie card of Zion was card number 01/25, which number one is his jersey number. Being so that this card is number 1 ads a lot more overall value because a lot of collectors or buyers want a player’s card that is his jersey number. This card will always be regarded as one of Zion’s first Cracked Ice Autographed serial numbered cards featured with a serial number of his jersey and for that reason along will have great long-term value! 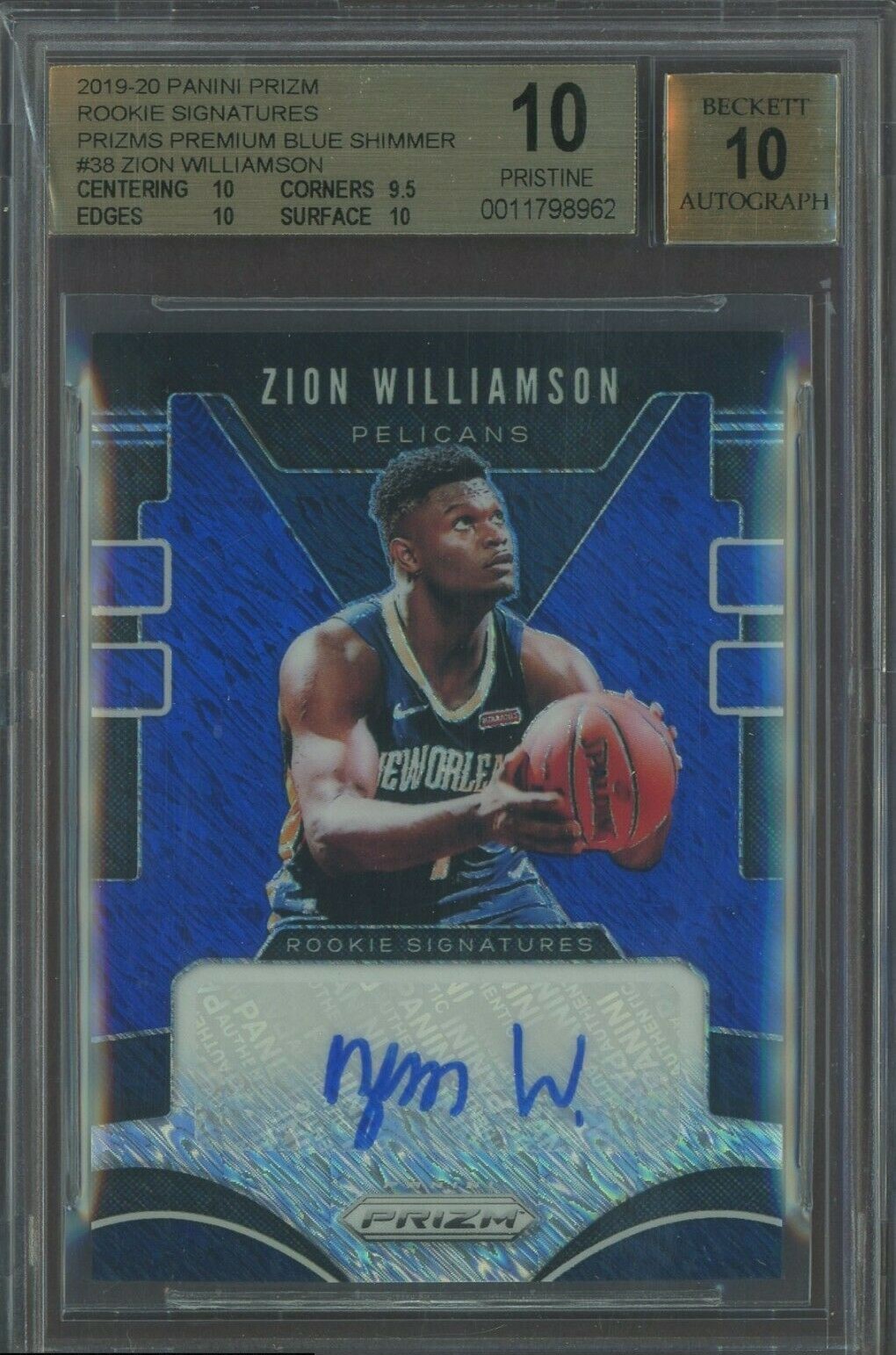 One of the newer themed colorways is Shimmer themed cards. Shimmer cards are similar to refractors except they feature more shine throughout the entire front of the card. This particular Zion card was also a FOTL (First-Off-The-Line) which means it was one of the first autographed cards to be released in this set. High-Grade examples of rare cards of Zion like this one are already selling for record prices and these types of cards will hold tremendous long-term value. 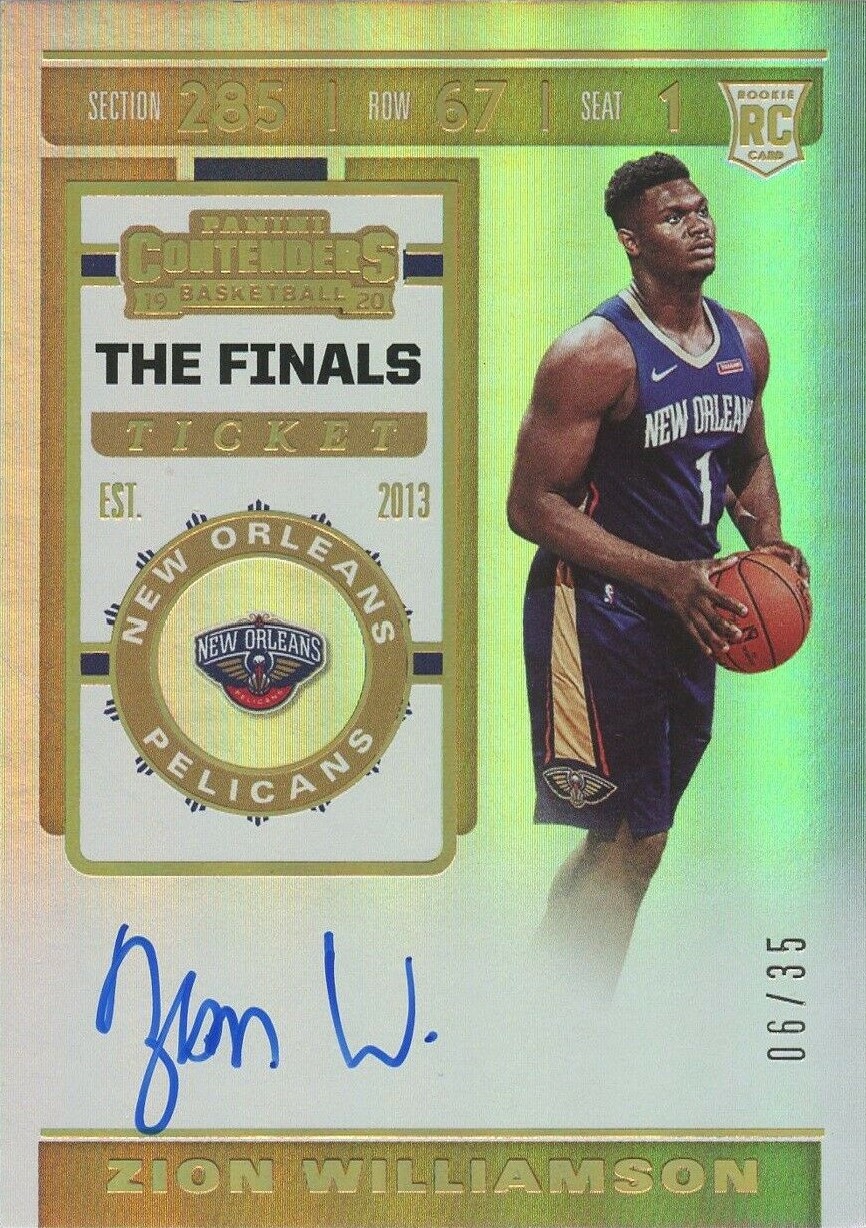 Zion features a number of different Contenders Autograph Rookie cards, this one is one of his rarest and serial numbered out of 35. His autograph is also featured on-card. Serial numbered Contenders Autographed rookie cards of Zion will continually become tougher to find within the coming years so now is a great time to invest especially this since it is numbered out of just 35. 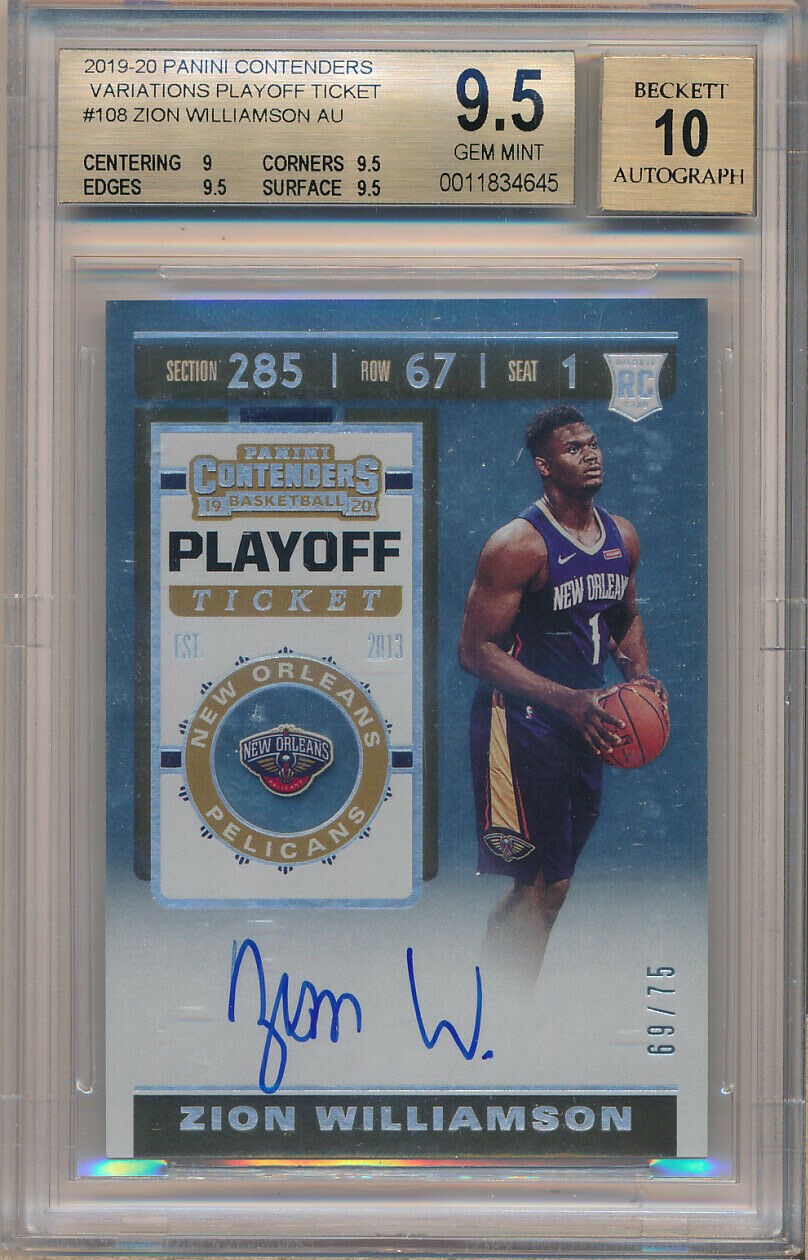 Zion also features a rare Panini Contenders Autograph rookie card serial numbered out of 75. This card is similar to the Cracked Ice version, however this one is considered a base autograph version that is serial numbered. Panini Contenders rookie autographs are extremely popular among the basketball hobby and are arguably one of the most desirable autographed rookie base sets each year. Zion’s autograph is featured beautiful on-card, high-grade examples of this card will become difficult to find within the coming years so now is the time to invest in this Zion! 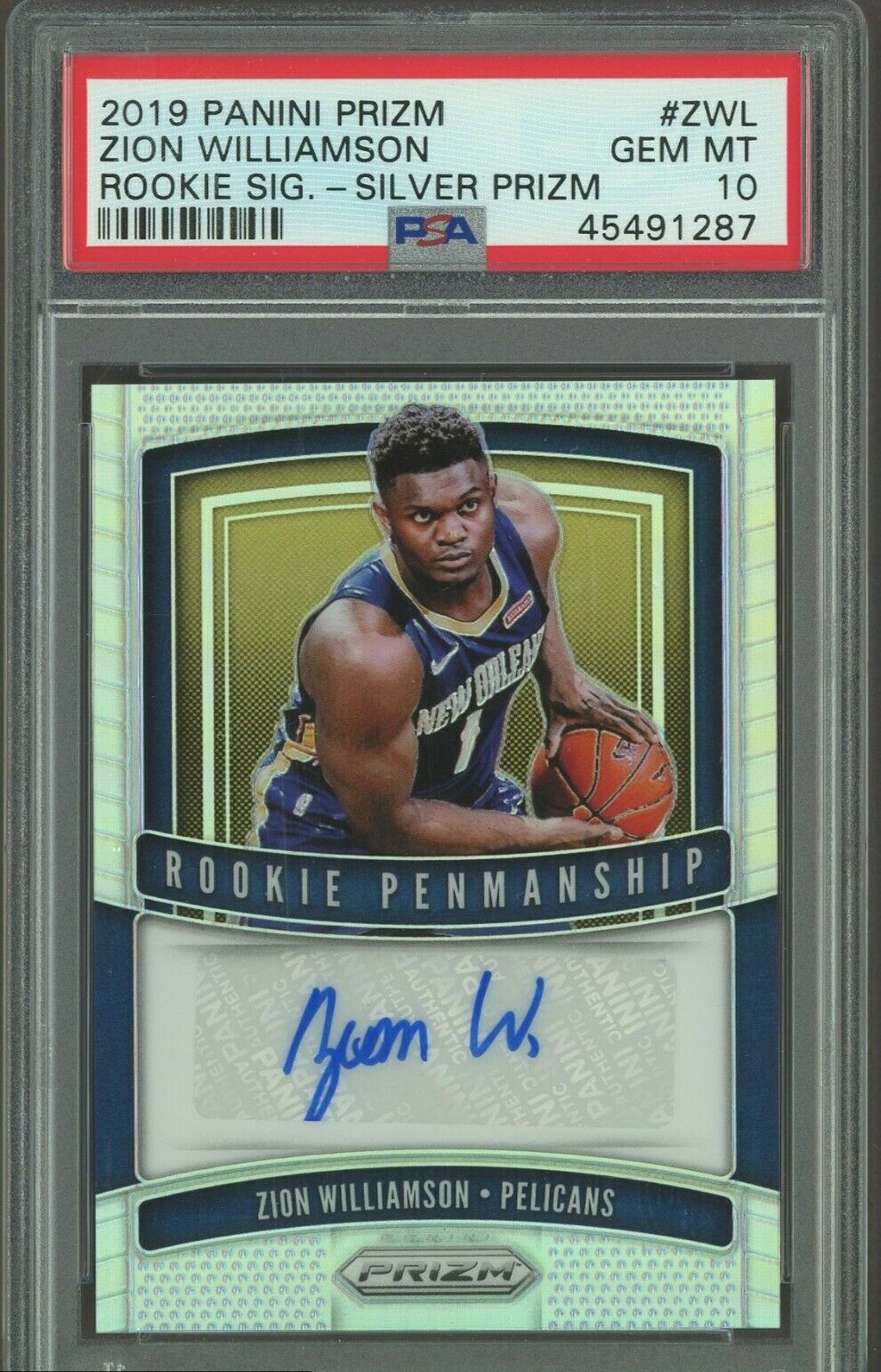 Zion’s Prizm Rookie Autographed Silver card is also extremely popular and sought after. This card is very similar to the base version except it is a Silver, which means the card is basically a refractor autograph. This card is considered a SSP (Super-Short-Print) and has already trending up a lot since the card originally released in December. Many basketball collectors or buyers in the hobby love to buy Silver Prizm Autograph rookies as it continues to be one of the more popular cards produced each year. 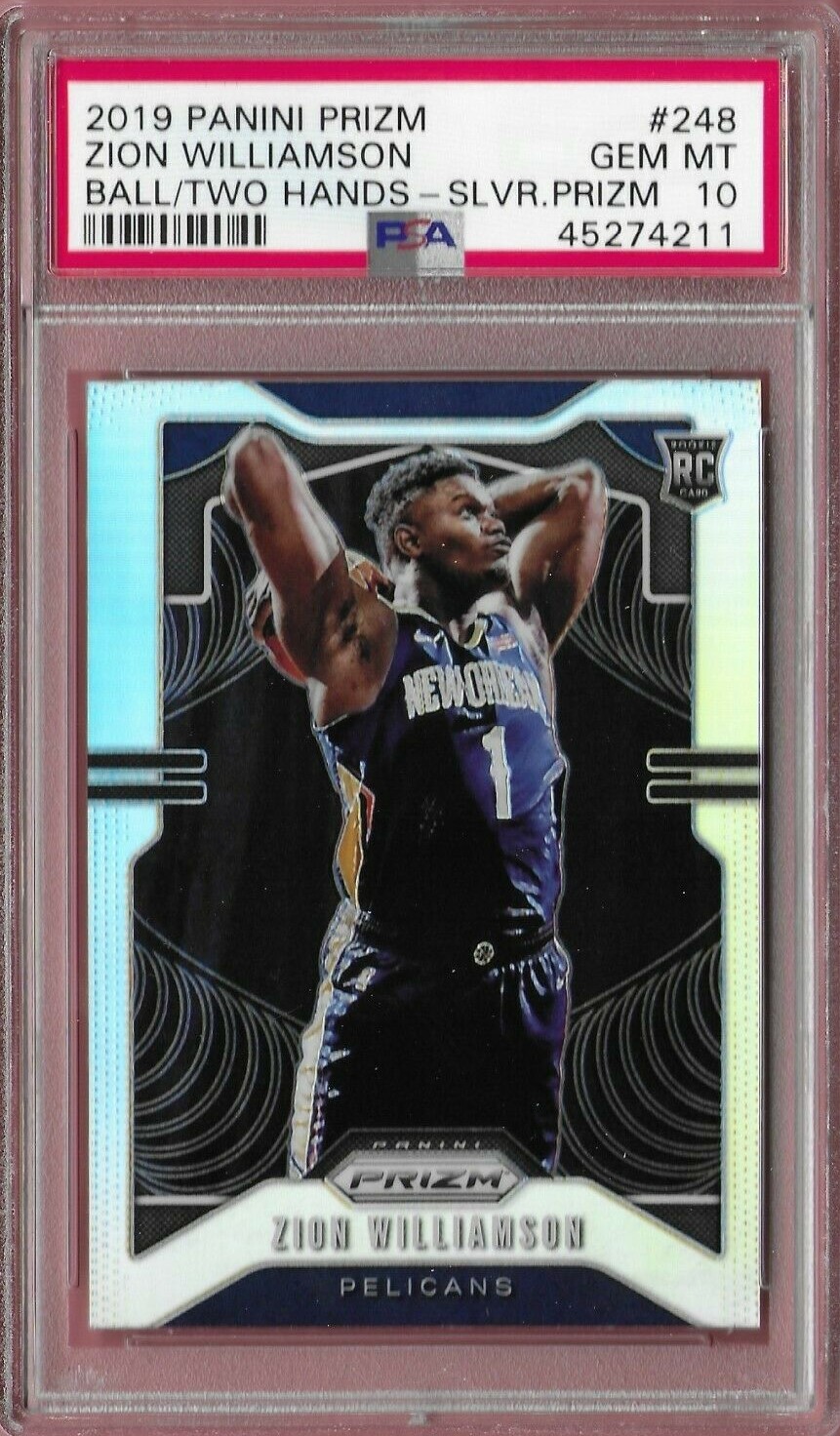 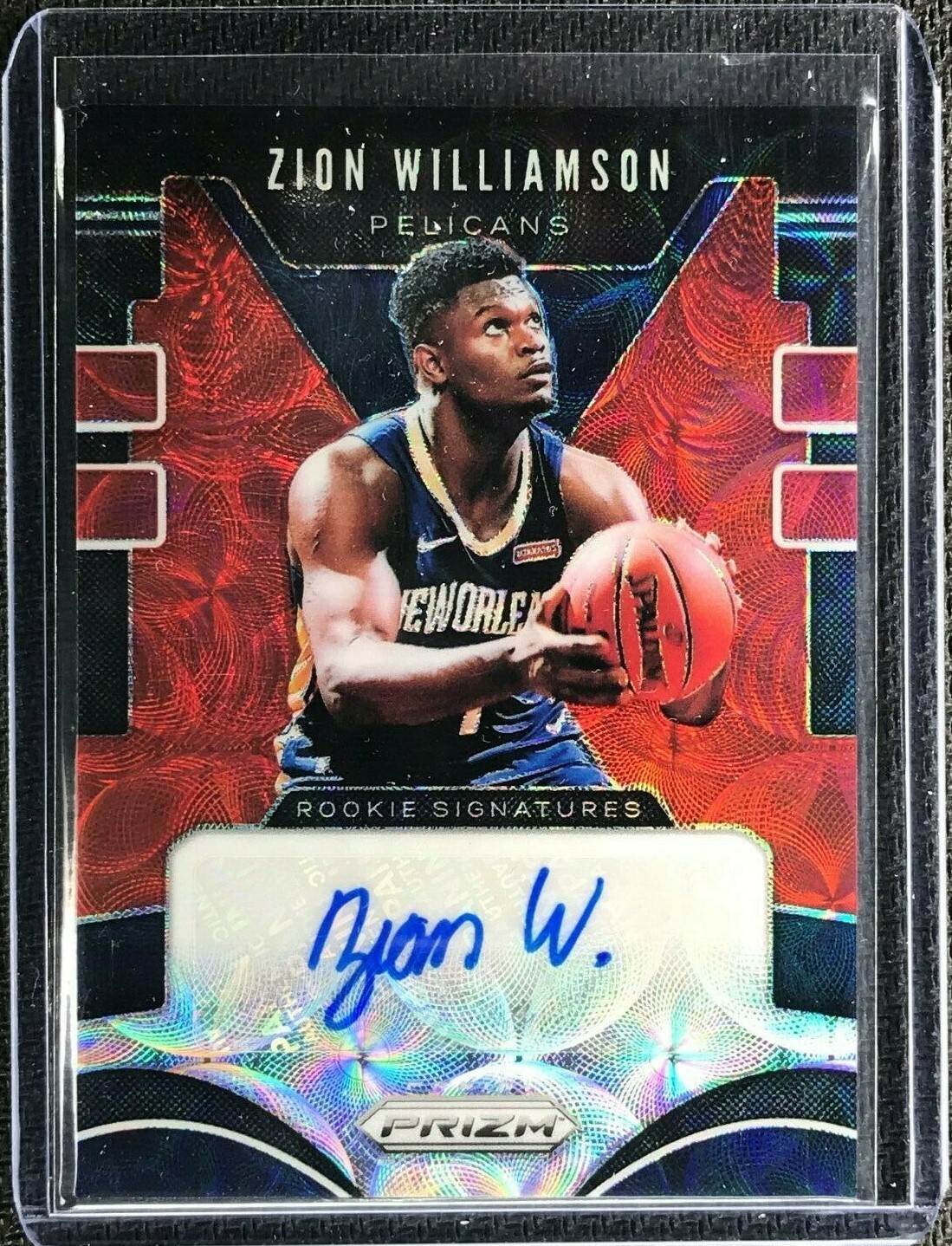 One rare color autograph featured in Prizm is Zion’s Red Signatures rookie autograph. The card features a die-cut looking themed design and is considered a short print. There is also a base version autograph, rare blue and gold version (which are highly sought after). This is another great option to invest in to go along with his other Prizm Rookie Autograph. 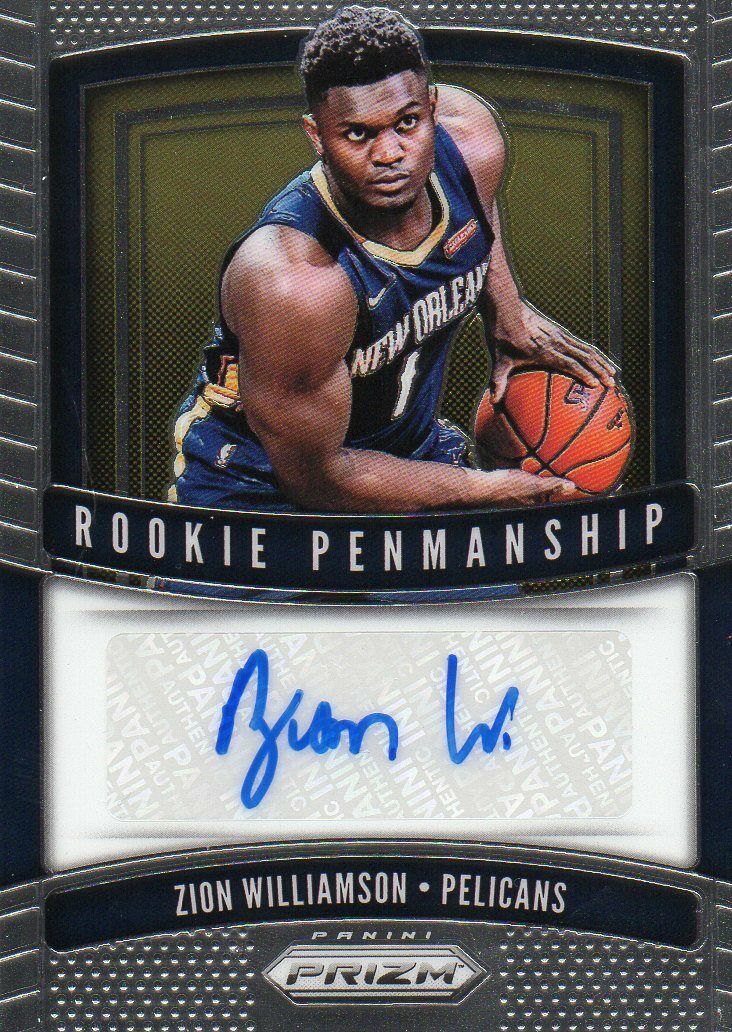 This card is considered Zion’s Base Prizm Autograph Rookie card. Base Prizm Autographed Rookies are continually sought after each year. It has been rumored that Panini made all of these a lot more Short Printed this year because of all the hype Zion was receiving and for that reason alone they are already very sought after. This is a great card to invest in because it is still very obtainable for many collectors or buyers and will only become tougher to find since its short printed. 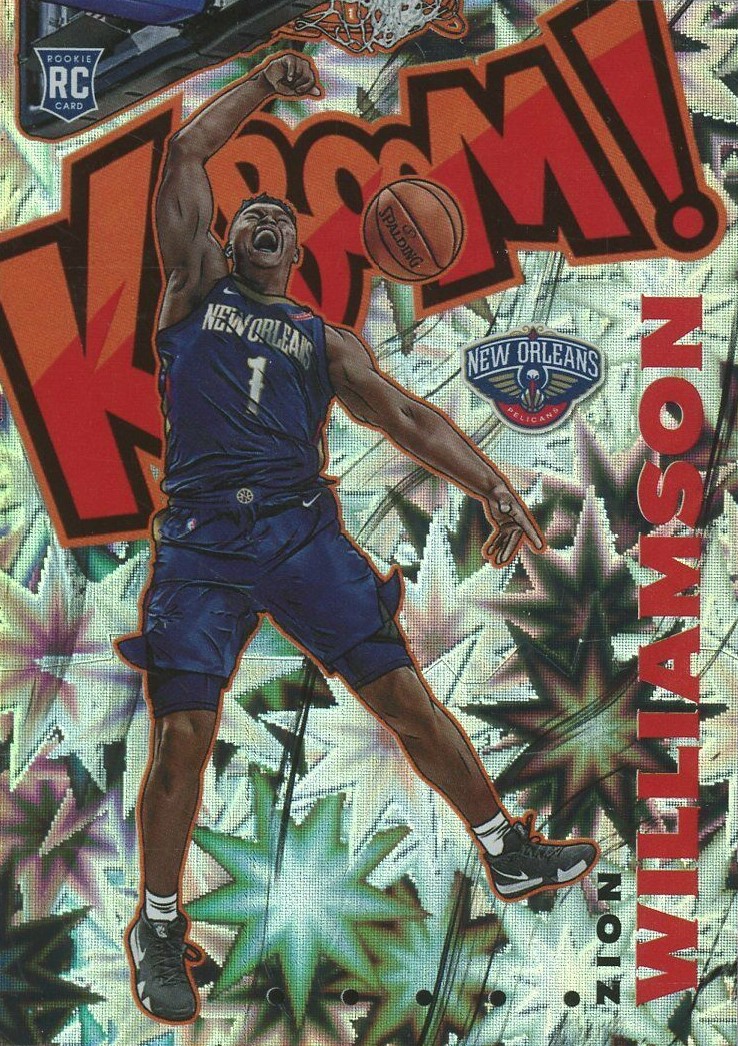 Panini Crown Royal decided to create a SSP (Super-Short-Print) insert card of Zion. This card is very rare and limited and considered a case hit, its unknown still of how many of these were printed but you would have to expect it would be less than 100-250 total copies. The creation of this card directly correlates with the popular and demand for Michael Jordan inserts cards and this card has already drawn huge buzz and demand. Being so that this card is already so rare and valuable it will only becoming tougher to find within the coming years. This was a great idea and unique card of Zion that offers buyers or collectors a rare insert card of Zion. 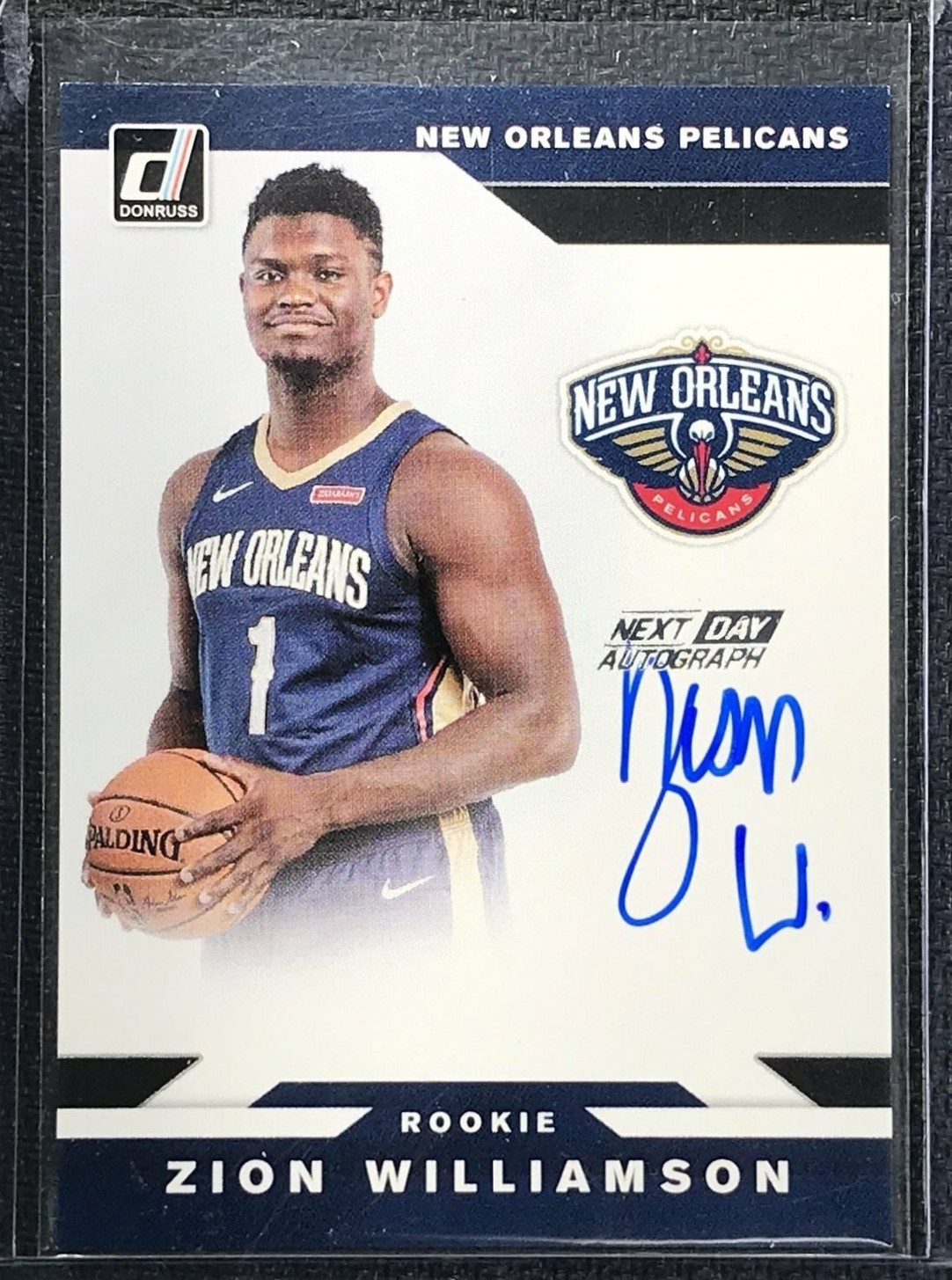 Zion is featured in a Donruss Rookie Autograph set, this card is considered very limited and sought after. Zion’s Donruss Autograph Rookie is a SSP (Super-Short-Print), this card features a bold on-card signature. The demand for this Zion card is strong and these will continually become tougher to find within the coming years. Will more Donruss Autographed Rookie cards like this one become more sought after in the future? 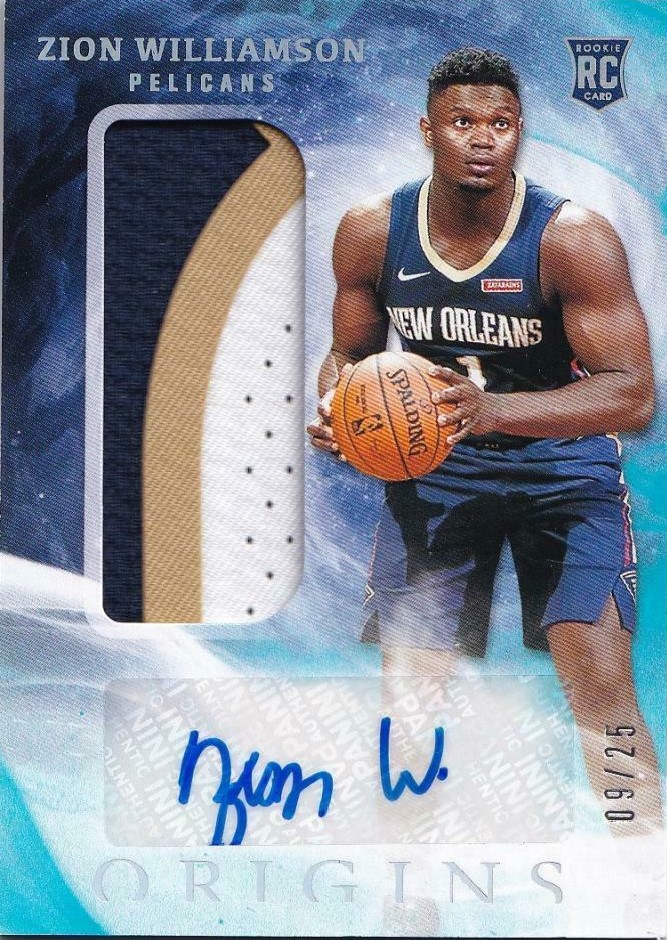 One of the more unique or throwback type of Zion cards this season is his Origins Patch Autograph rookie serial numbered out of /25. The card features a 3-color patch and a sticker auto. A couple of things to point out about this card is this is a very thick card, which means its condition sensitive. The corners could easily be nicked or the edges since this card is so thick. This particular example the autograph runs off the sticker, which also effects the overall value. 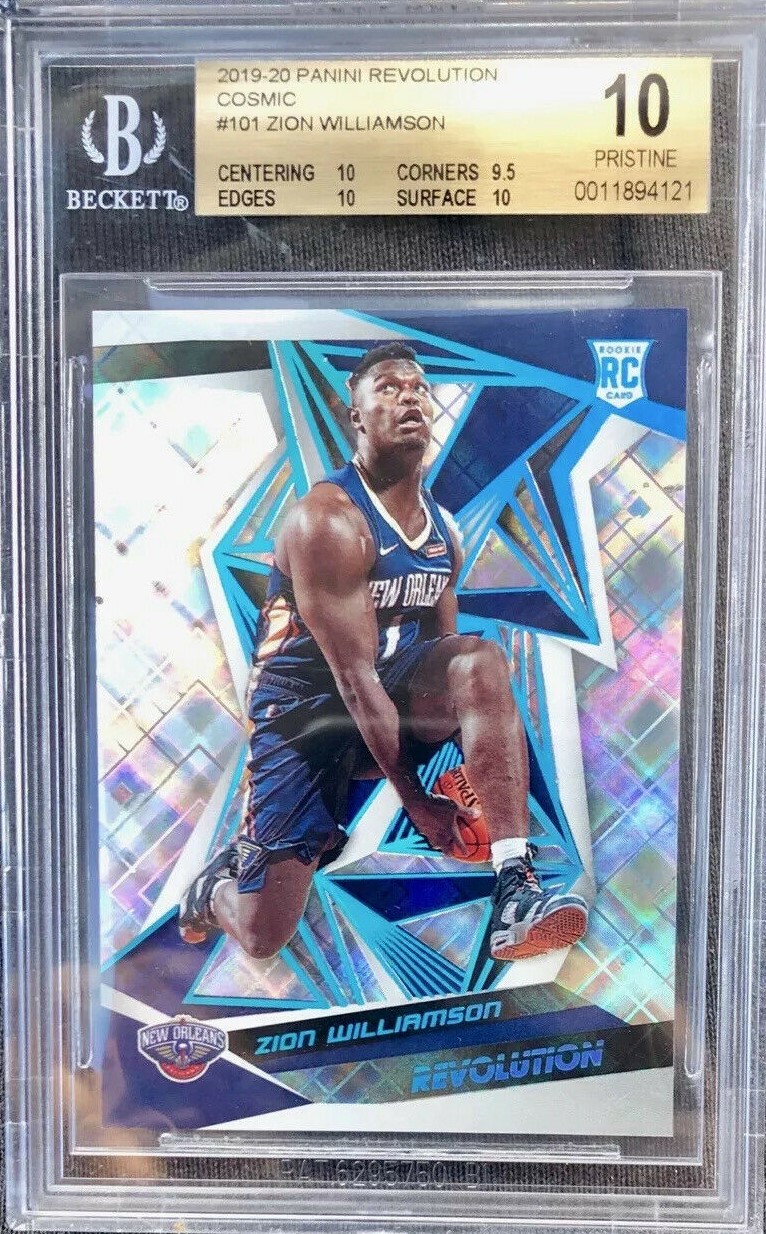 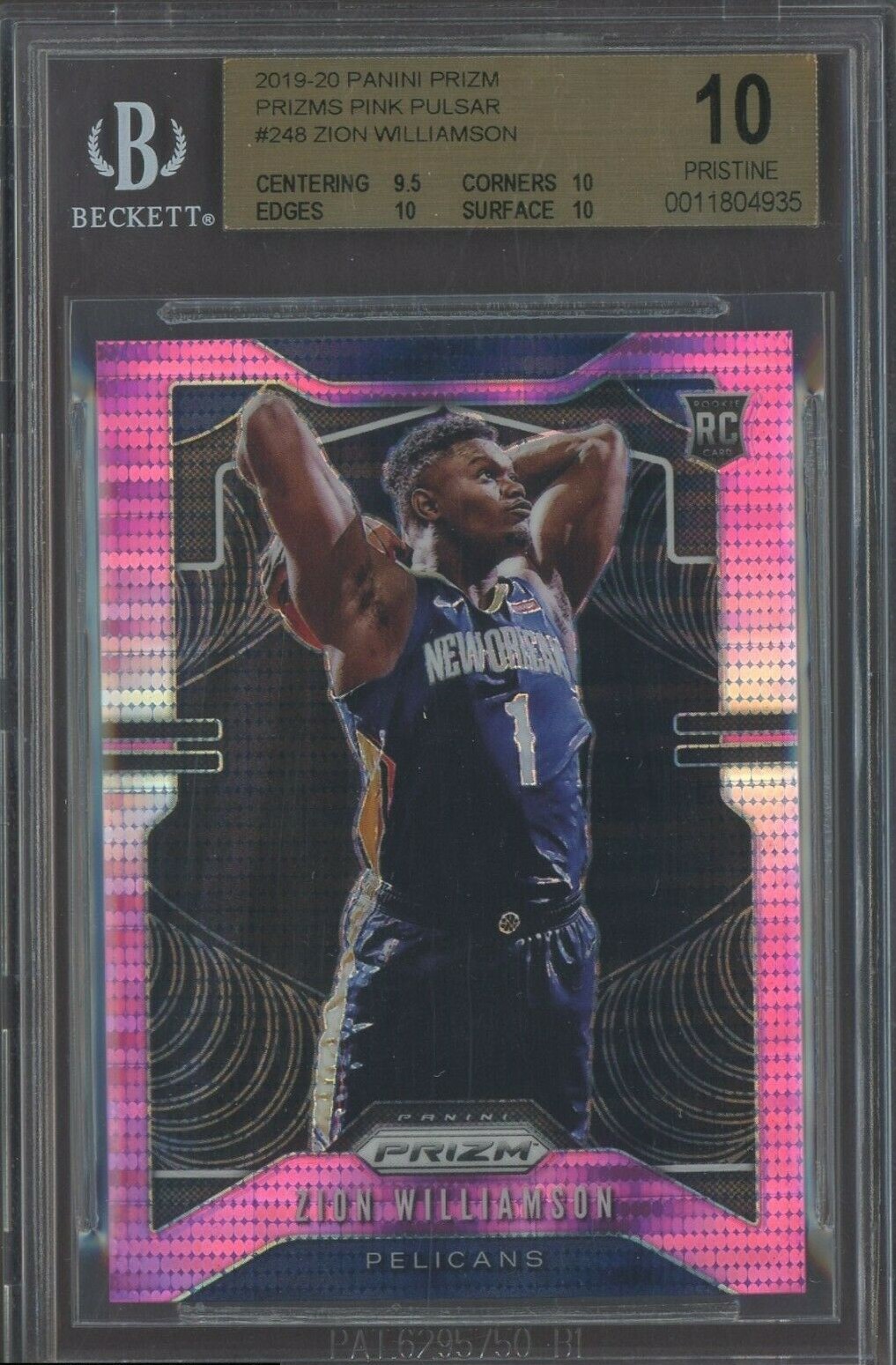 One other rare parallel rookie of Zion that released this year in Prizm is his Pulsar rookie. They are featured in Purple /35, Pink /42, Green /25. Pulsars are similar to color themed cards except they have a refractor shine throughout the card and are serial numbered. Zion features many other color themed Prizm Rookie cards that are very popular! Pulsar colors of Zion will continue to sell very well since they are so limited and already becoming tougher to fin. 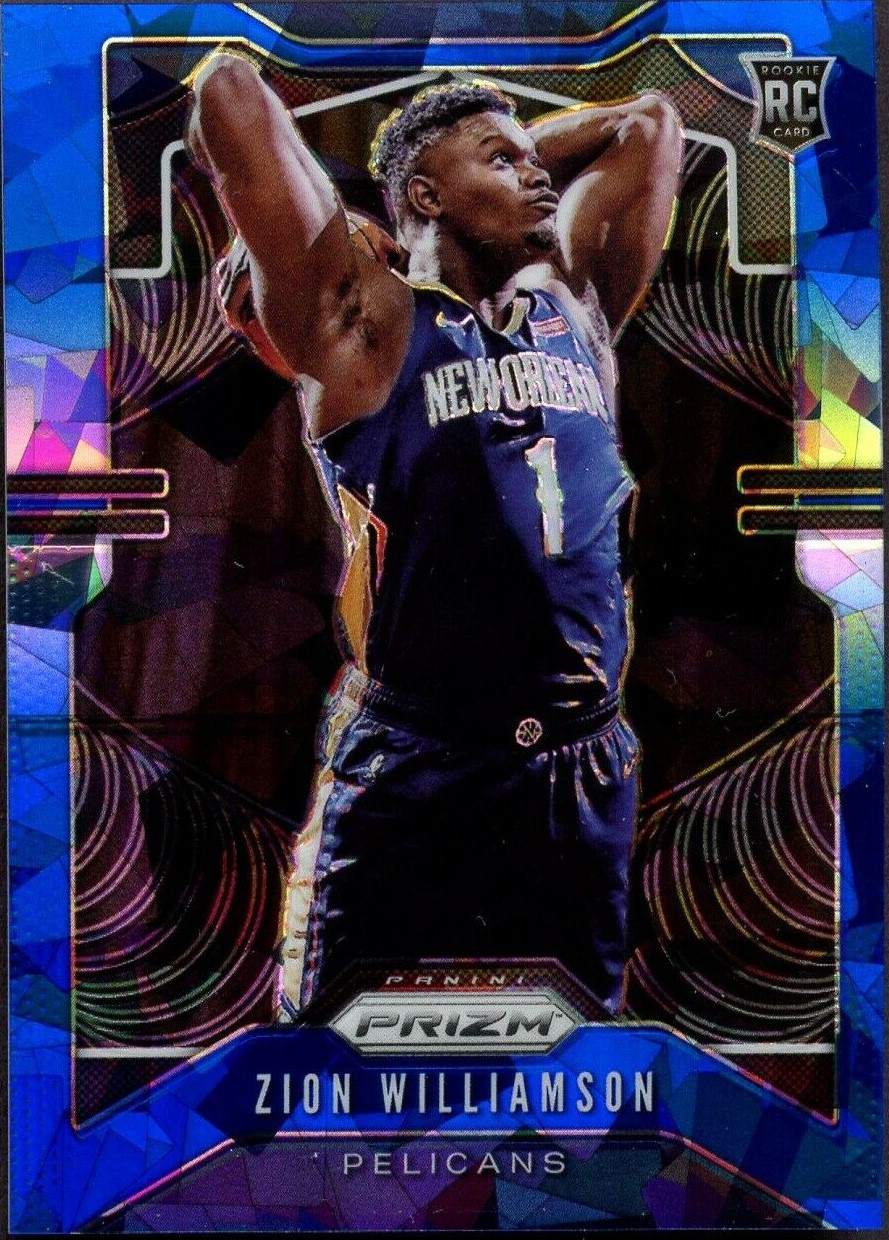 Zion also has Cracked Ice themed colorways featured in base cards. This includes Orange, Green, Red, Pink and Blue, all of these are short print and very popular. The blue one is serial numbered out of /99 and seems to be worth the most but the other are still drawing a lot of interest as well. 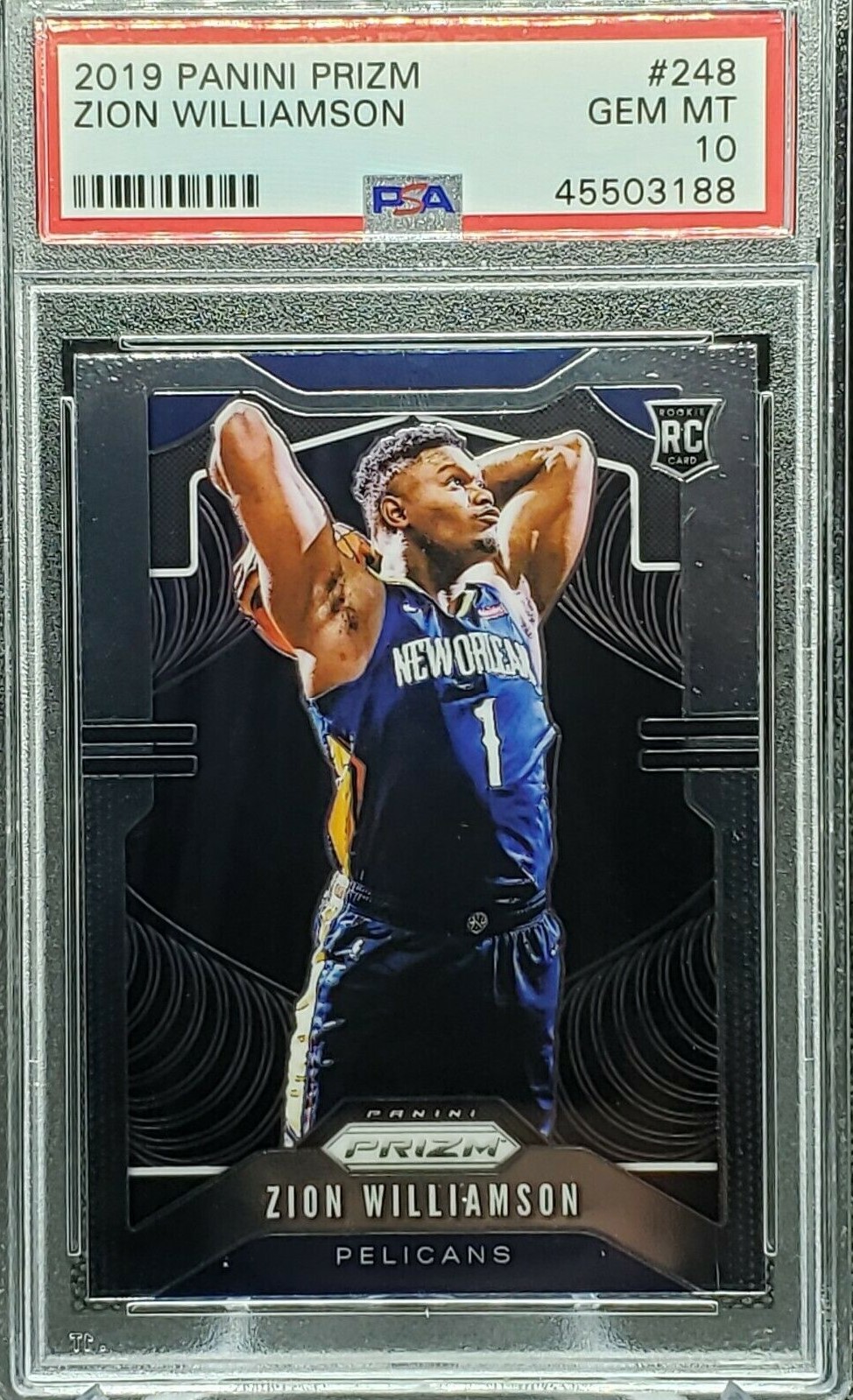 Zion’s base Prizm rookie card has been one of his most popular cards throughout the hobby the last couple of months. This card will easily become his PSA Rookie Registry card, base Prizm rookies on other star players continue to soar in value. Great card to invest in long-term or even buy in bulk because this card will always be considered his most popular base rookie card. PSA 10s or BGS 9.5 examples especially will continually become more sought after, the time to invest in a high-grade Zion base Prizm rookie is now! This Prizm base rookie card of Zion of has been one of the most sold on eBay since its release in late November.

The sky is the limit for Zion Williamson who is just 19 years old and has already shown flashes of having great potential this NBA season. Which Zion card are you investing in? Which card will continually go up in value in the short term or long term? Can Zion live up to the hype? Will Zion’s NBA National Treasures sell for the highest or will he be featured in Upper Deck Exquisite?