Derek Jeter cards have continually increased in value every year since he retired in 2014. In January of 2020, he is next up to be elected to the National Baseball Hall of Fame. His announcement is fast approaching and many of his most sought after rookie and autograph cards are increasing in value fast. As a Jeter collector, I have researched heavily the last couple of years as to which Jeter cards are his best and most popular. Here is my list Top 15 of Derek Jeter cards you should be buying. 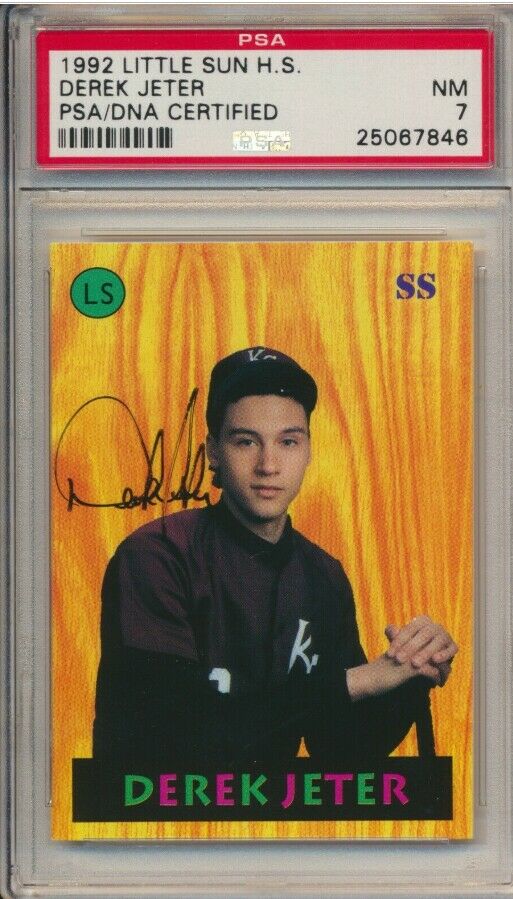 Every collector or buyer always wants to find out which card was a player’s first card of them. Jeter was considered a top prospect in high school and eventually drafted #6 overall during the 92 Draft by the Yankees. Bowman Draft autographs were not around during 92, but a rare on card autograph card of Jeter would still be created. Little Sun was a card company known for creating cards of top high school prospects. During 1992, Little Sun featured a base version Little Sun Jeter card, along with a Little Sun Autograph with a limited print run of just 250. Jeter would sign the card towards the top left with a Black sharpie. This card is known as Jeter’s first certified autographed card. The Autographed version continues to increase in value, although Jeter’s first on-card signature is a little streaky everybody still wants one. The autographed Little Sun card has been considered as “The Holy Grail of Jeter cards.” There is still an un-known about this card and Jeter’s proof card to many buyers and collectors of just how rare and valuable both these cards are. 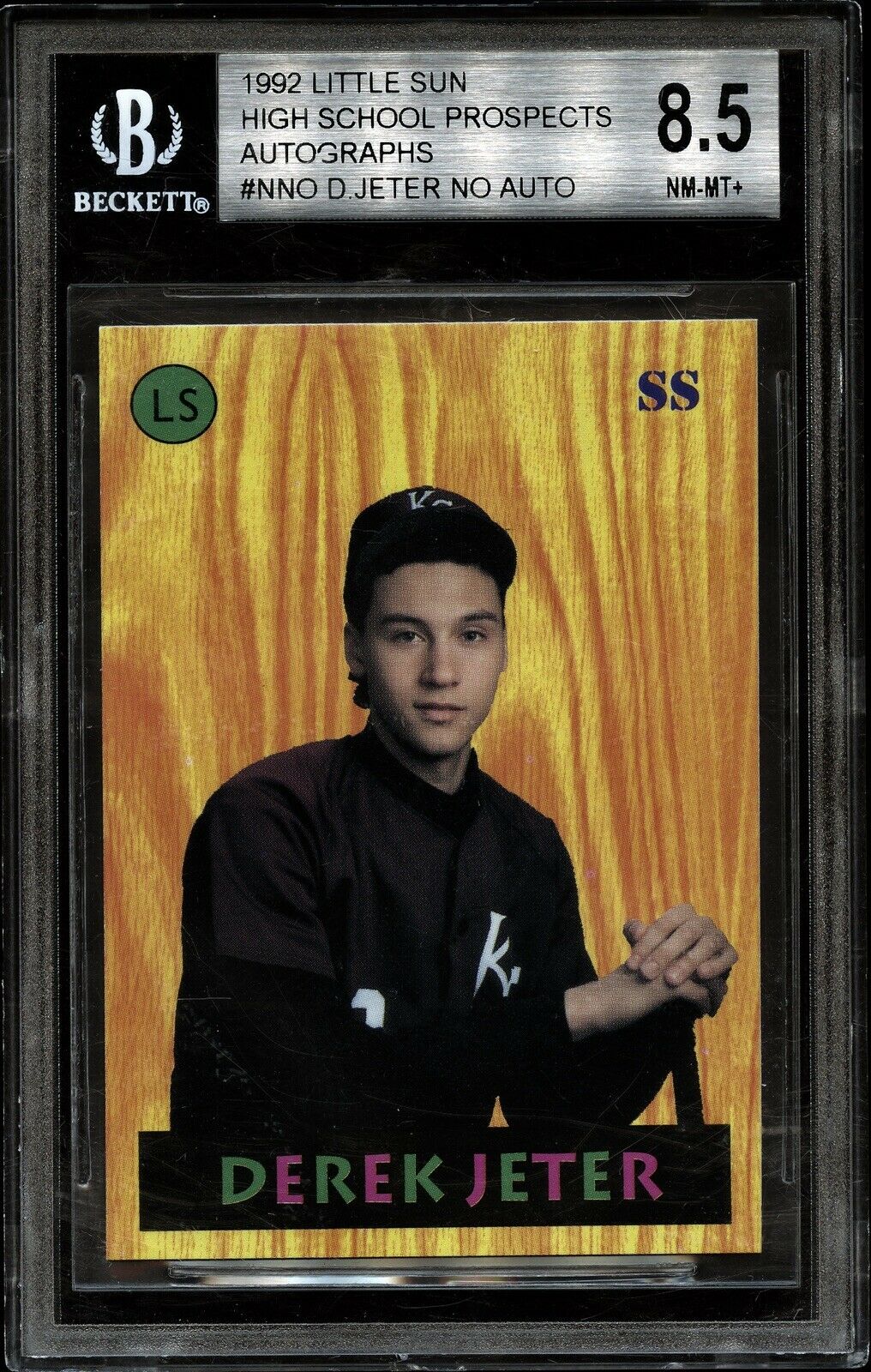 Jeter’s Little Sun proof card is known as “Proof Examples” which were non-autographed versions or considered extra copies that were left un-signed by Jeter at the time of the initial release. Many of the proof cards that surfaced were eventually forged causing the remaining un-signed proof versions to be extremely sought after as well. According to a lot of research after learning about the history of this card, there is an estimation that less than 100 un-signed proof card examples of the Little Sun Jeter card remain in circulation. There is a few that pop up for sale a couple of times a year but these are becoming increasingly tougher to find. This is a great card to obtain while you still can and goes along great with the Jeter Little Sun autograph card. 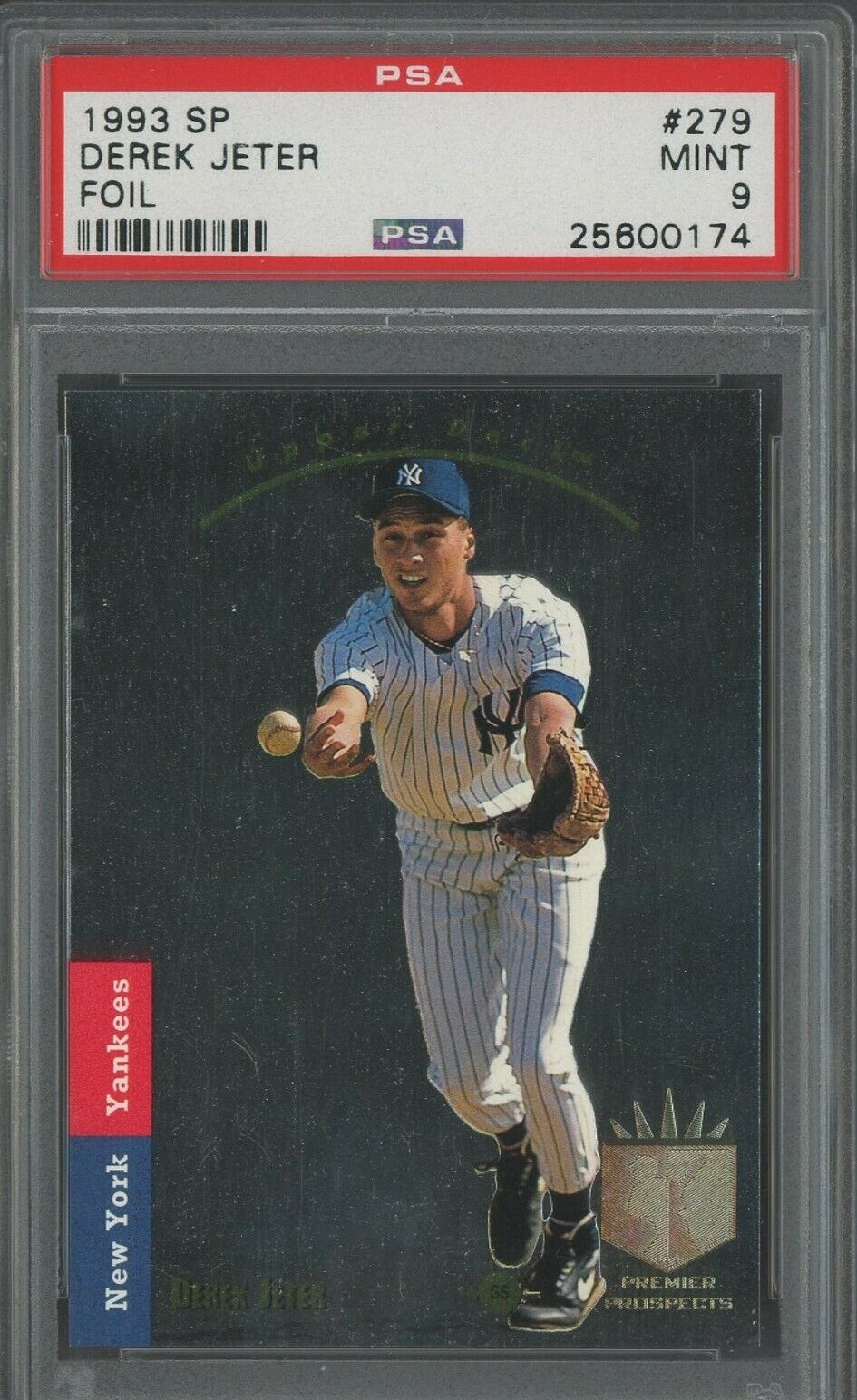 This card is arguably considered Jeter’s most popular rookie card. Jeter’s SP rookie is regarded as his go to PSA Registry rookie card; in fact, his SP rookie card is his most recognizable card to many collectors and turned heads when a PSA 10 gem mint went for a whopping $99,100 in an auction. Jeter’s Upper Deck SP rookie is easily one of the best baseball cards produced by Upper Deck. It has a rare combination of rare shiny foil and outstanding photo displaying a young Jeter. Jeter’s SP rookie continually trends up in value dating back to the last couple of years especially in high-grade examples. Since this card is so popular, I would expect it to be one of the biggest risers in value from now until Jeter’s Hall of Fame induction announcement. Many of his SP’s graded in PSA 7’s or 8’s are still very obtainable for many collectors or buyers. Another great long-term investment is investing in versions of this card that were signed by Jeter featured with a bold signature and slabbed and certified like PSA/DNA, BAS certified, PSA Authentic. If you do decide to buy an autographed one make sure to know that, the majority of the time only the cards autographed is graded unless it states otherwise. Signed slabbed rookie cards like Jeter’s SP are great investments. 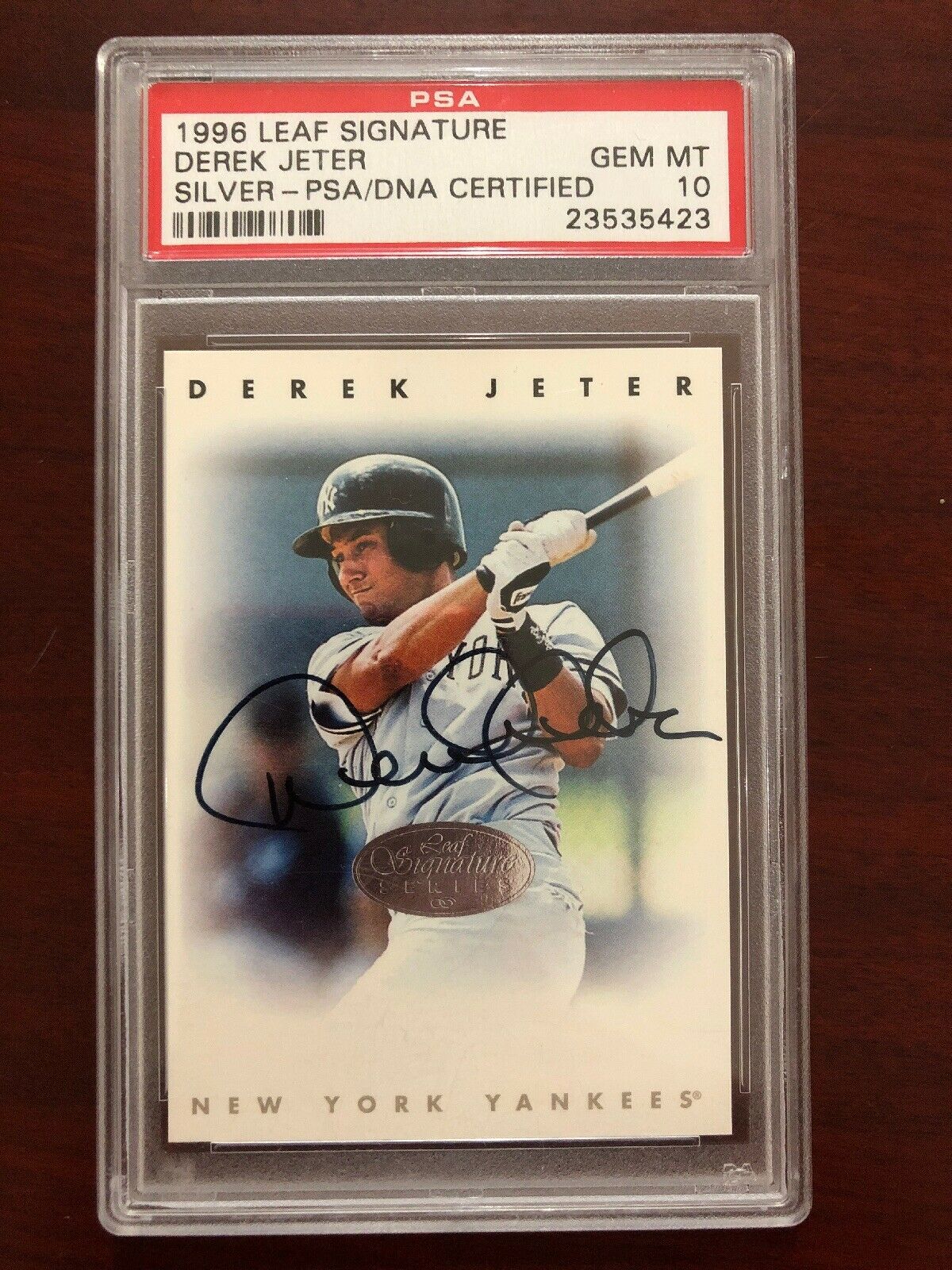 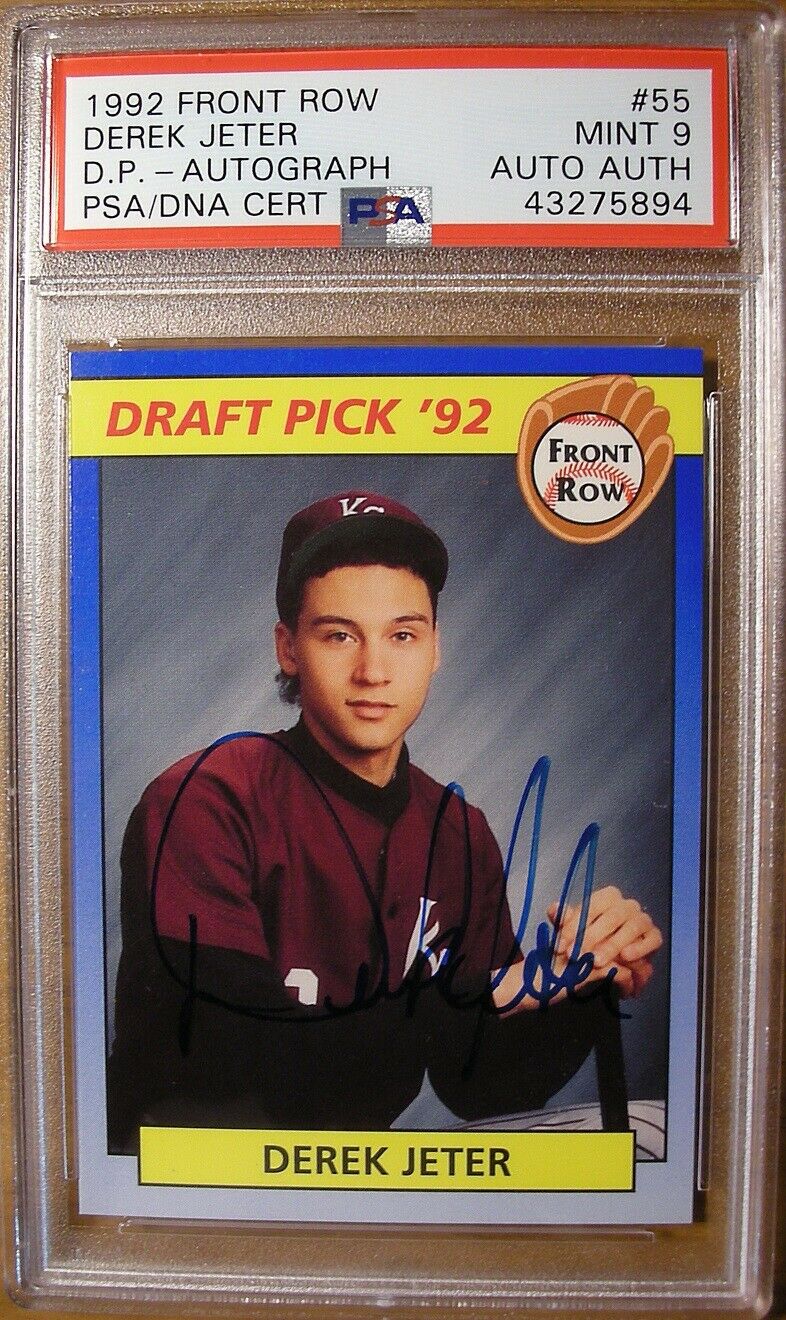 Similar to his Little Sun autograph card, Jeter featured another short printed on-card autographed card during his high school days. Jeter is displayed in the card in his red Kalamazoo, Michigan maroon high school uniform. His autograph slightly blends in the card making it tough to see the card is actually signed for some, however this card is becoming a lot tougher to find. The print run was estimated that Jeter signed just 500 of these, and featured the old school white circle authentication stamp on the back. Jeter was also featured in a base version Front Row card and some of those were hand-signed by Jeter and later on authenticated. In order to avoid confusion you want to look for the one that was signed by Jeter in the middle of the card and authenticated on the back, the other versions are just base cards that were obtained and signed later on in Jeter’s career and not signed during the initial time of this cards release. 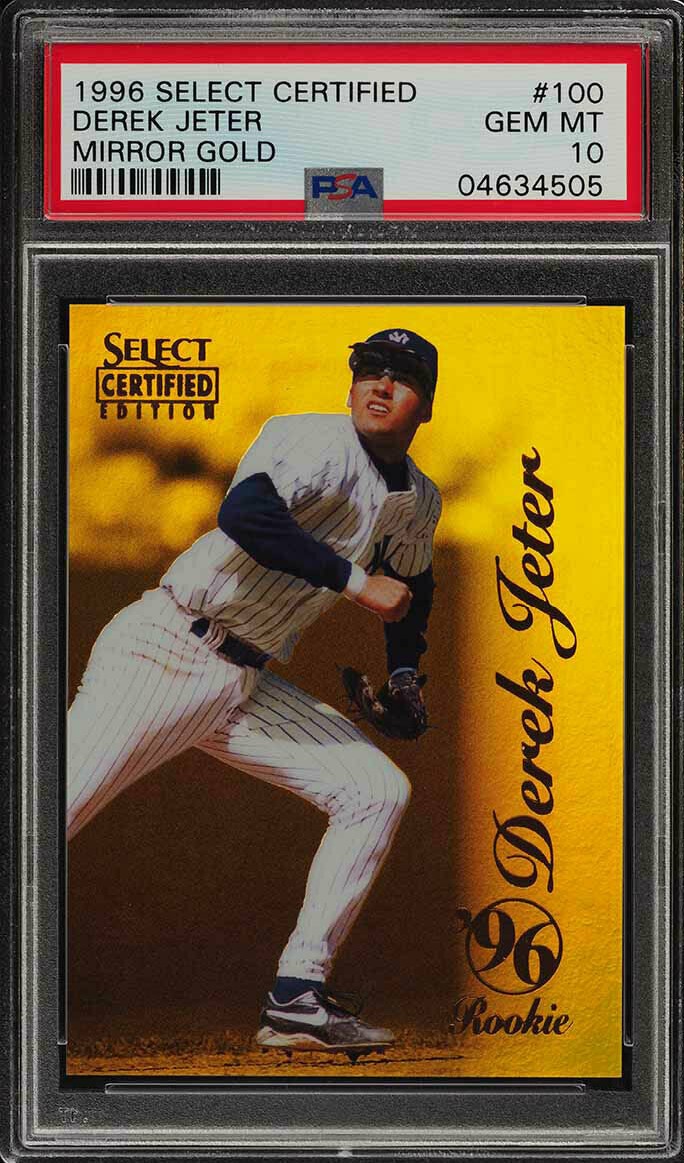 These select certified cards of Jeter are extremely sought after. Select Certified created a number of different rare versions which includes a base version, artist proofs /500, certified blue /180, red /1800. Similar cards are called the 1996 Select Certified Mirror, which are a lot more higher in demand. There is four rare versions of the Mirror cards, Select Certified Few, Mirror Red /90, Mirror Blue /45, Gold /30. The mirror versions are comparable to refractors and very pricy. All of these parallels could easily be considered rookie cards since Jeter’s first full season in the majors was in 1996. 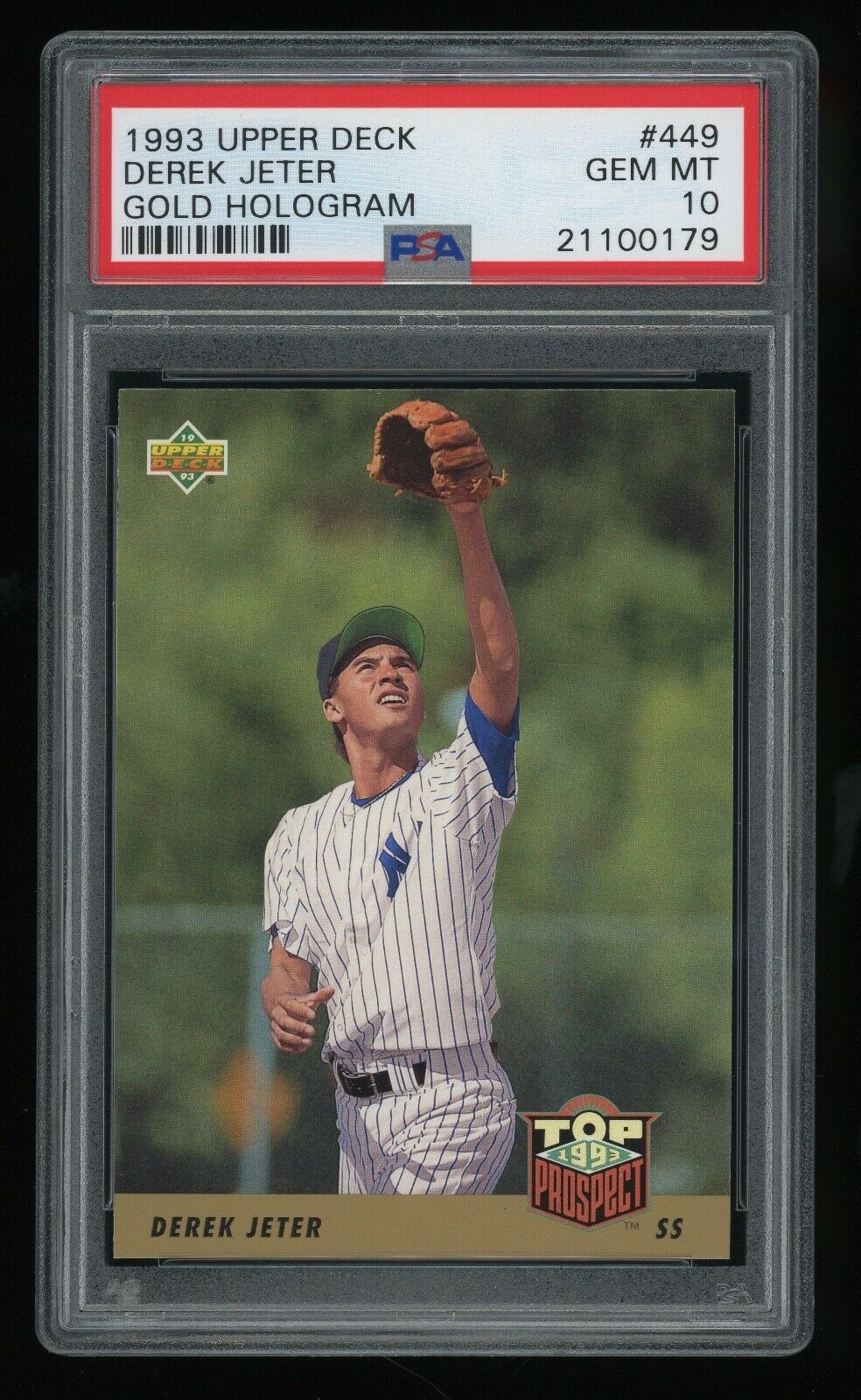 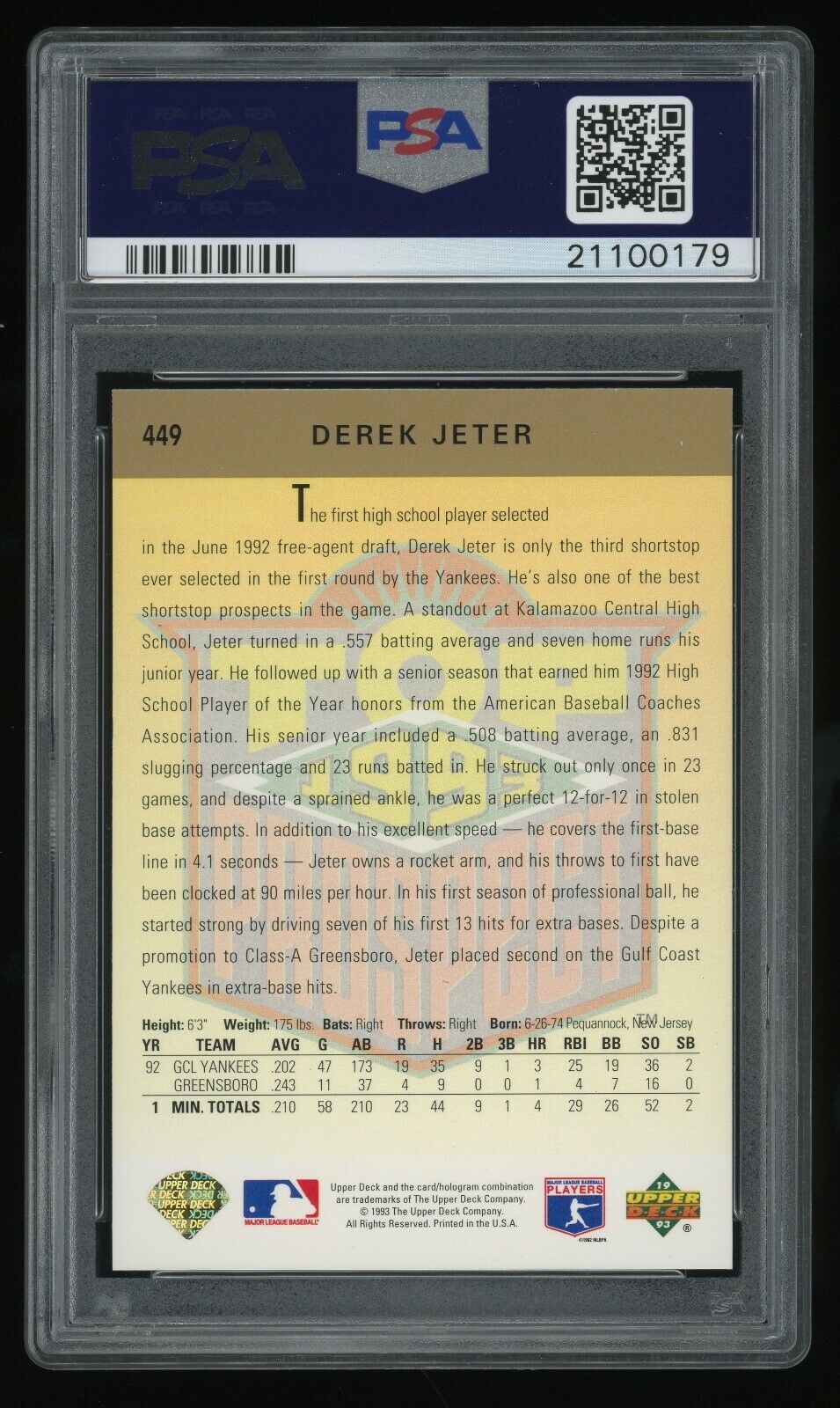 One of Jeter’s other popular rookie cards is his Upper Deck rookie. Many collectors during the 1990s may have owned the Upper Deck base Jeter rookie card that was easily obtainable, however there is a rare version of a similar card called the Gold Hologram. The way to tell the difference is from the back near the bottom left sticker. The sticker on the rare Gold Hologram version will be gold while the base version will be silver. On the front of the card there appears to be a small indentation going through the middle of the card as well on the gold hologram version. Considering the Gold Hologram version is a lot rarer it is not crazily expensive and still very obtainable for collectors or buyers. 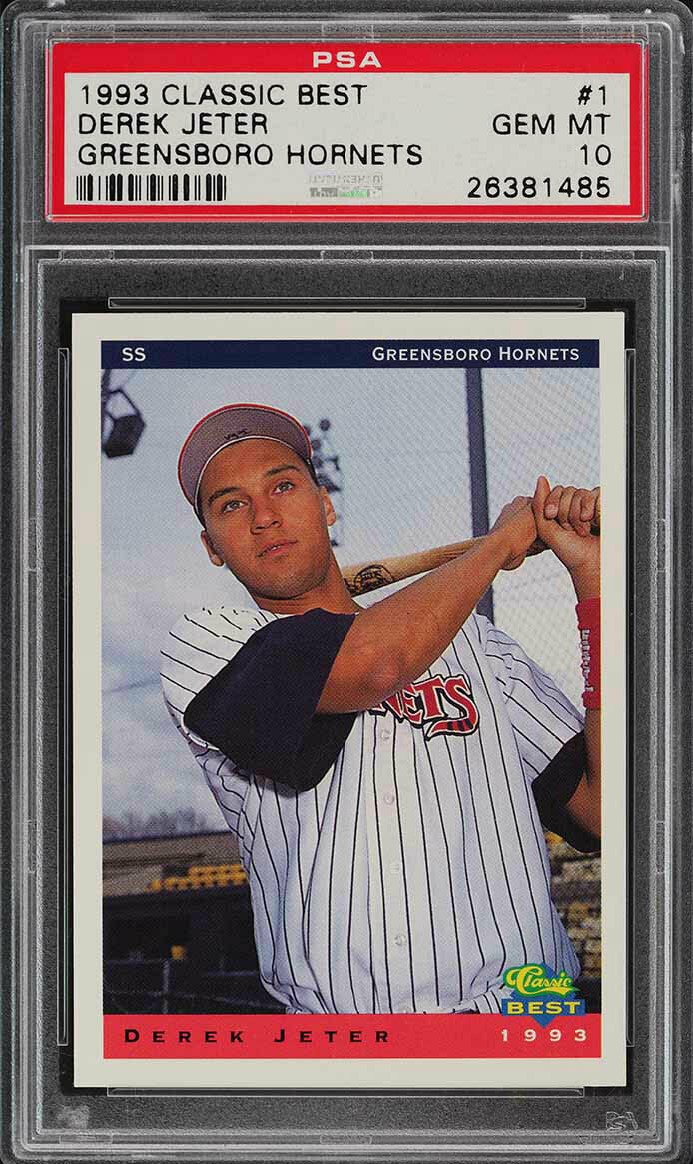 One of the rarest minor league Derek Jeter cards is his 1993 Classic Best Greensboro Hornets card. This card has an extremely low POP report, which features just 28 PSA 10’s and 24 PSA 9’s. A friend of mine who collects Jeter told me this card is rarer than the 1952 Topps Mickey Mantle card, and that this Jeter card is still very undervalued. The card has an old-school majestic look to it. Being so that this Jeter card is so rare, it is an absolute no-brainer for collectors or buyers to invest in this card of Jeter while you still can! 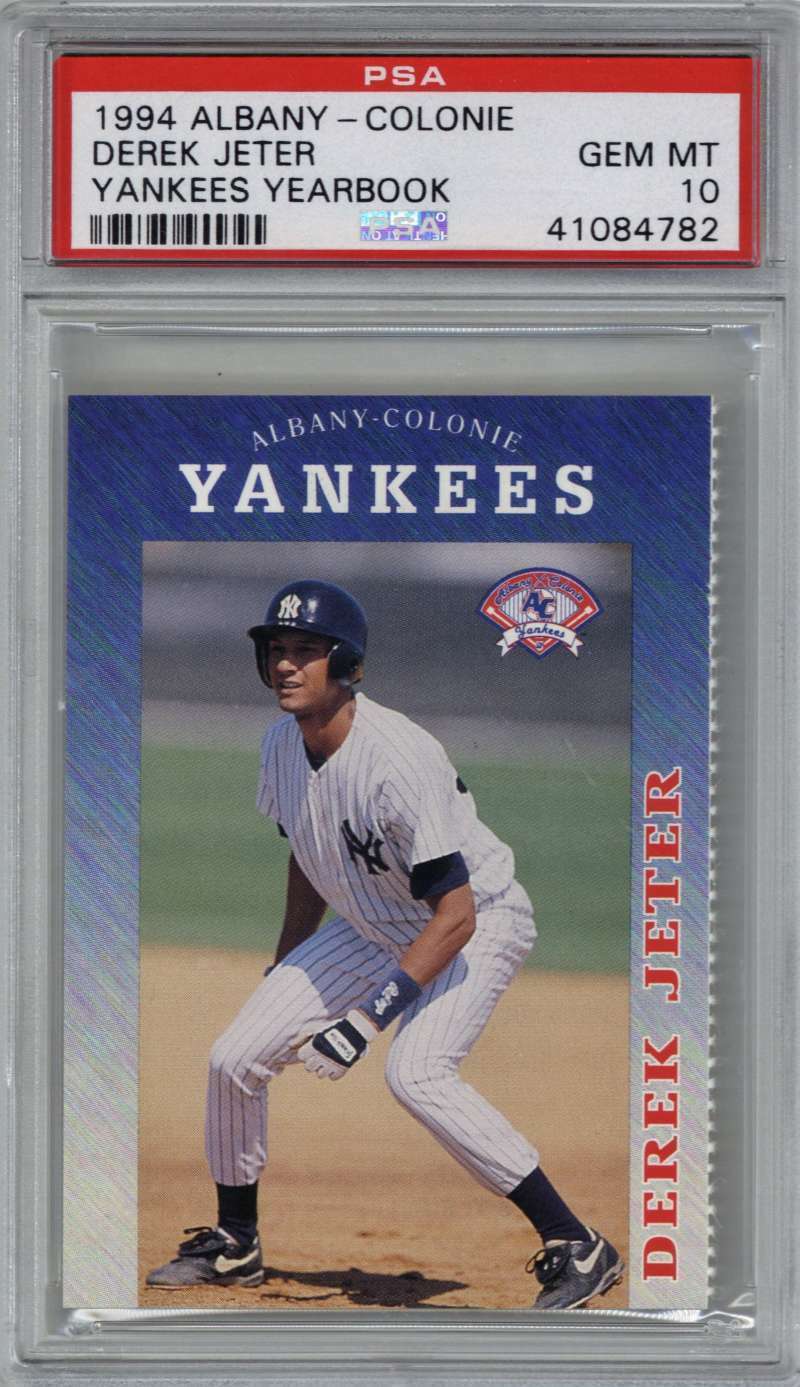 In the summer of 1994, Derek Jeter played in Albany, New York for the then Double A Yankees. During his tenure on the team, fans were given out yearbooks, which featured players minor league cards in them. In the yearbook there was a page of cards all attached together. Jeter’s card you had to literally detach from another card, which is why this card is perforated along the sides. Many fans at the time did not realize that this card would be worth a whole lot in 1994, so many of the yearbooks were lost or not even kept track. Collectors who attended Albany Yankees games in 1994 could have the yearbook and not even realize they have Jeter card intact inside. This Jeter card is easily one of the toughest cards to find but some still remain out there. It’s one of those cards that has a very low POP report on both PSA 10’s and BGS 9.5’s. The card is a must have for anyone that grew up from Albany and loved Jeter. 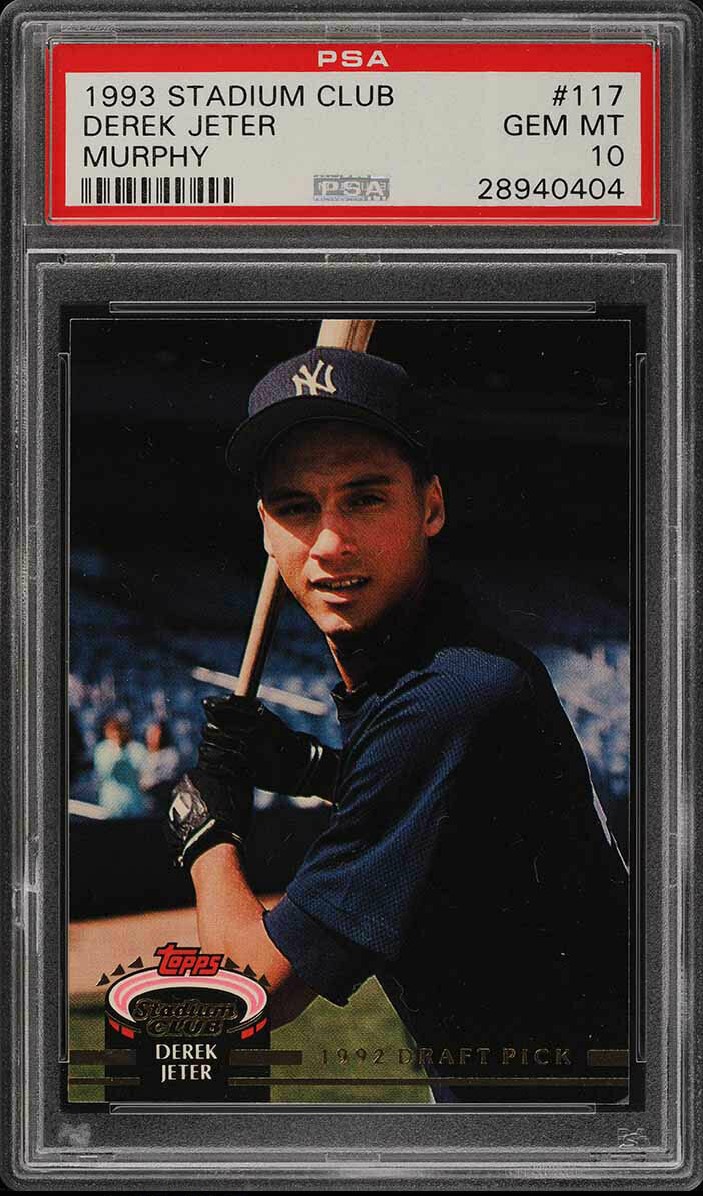 During 1993 to help promote the new expansion teams the then Miami Marlins and Colorado Rockies Topps created a separate set featuring short printed inaugural cards. The Marlins version will have a gold circle emblem near the front bottom left corner while the Rockies version will have the gold circle emblem near the front bottom right corner. Ironically, Jeter would become owner for the Miami Marlins in 2017 causing the Marlins Topps inaugural card to go way up in value. Both cards are great long-term investments because both of these are short-printed to just a 10,000 print run. 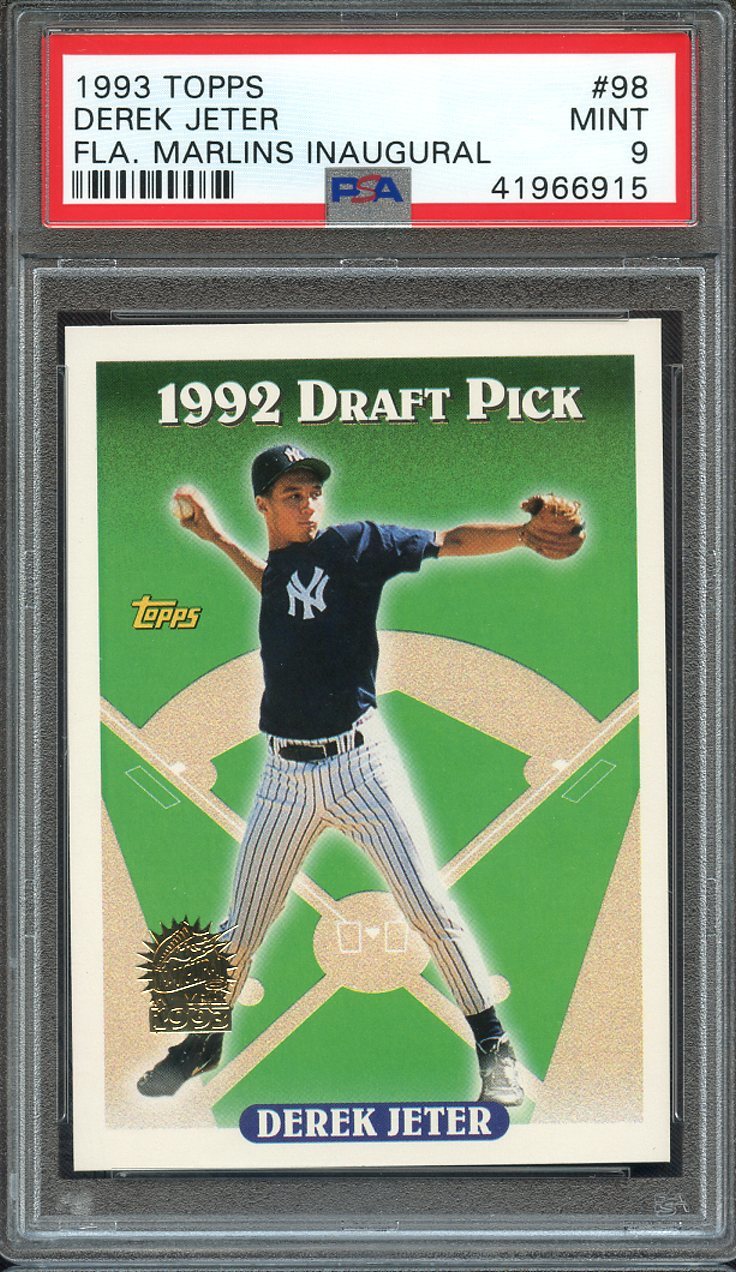 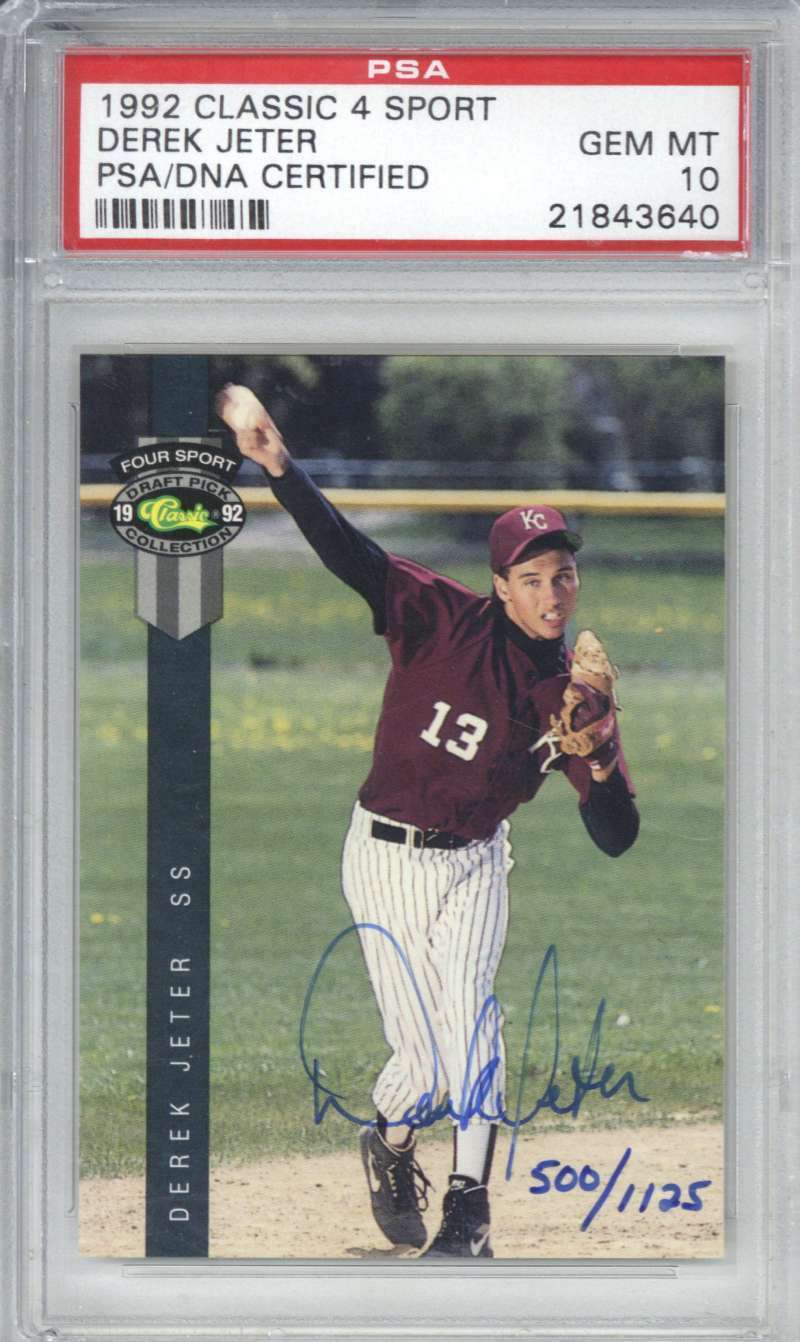 One other early Jeter autograph card that is becoming tougher to find is his 1992 Classic Four Sport autograph card. This autographed card was randomly inserted into four sport packs during 1992 with other star athletes at the time like Shaquille O’Neil. Jeter is again featured in his high school uniform on this card. Jeter’s autograph was signed on-card, many of these autographs on this card are very streaky or faded so it is very difficult to find one that has a crispy signature. Since this card is card is one of Jeter’s early signatures and was most likely signed when he was still in high school it will always have great long-term value. Look for this card signed with the serial number attached with the signature; other signed examples are not the ones that were first originally signed in 92 by Jeter. 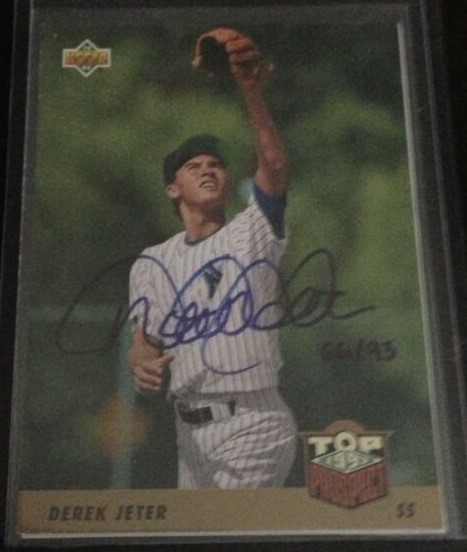 In 2009, two all-time great rookie buyback autograph cards of Jeter were re-created. They were both signed and each one serial numbered specifically by Jeter out of 93. Both Jeter’s Upper Deck SP rookie and his Upper Deck rookie were re-created, signed, and serial number individually. Being so that both of these featured a print run of just 93 make them difficult to find. Usually once in a while they pop up for sale but they are becoming tougher to find. Both of these cards were great cards that were re-created and signed by Jeter on-card. 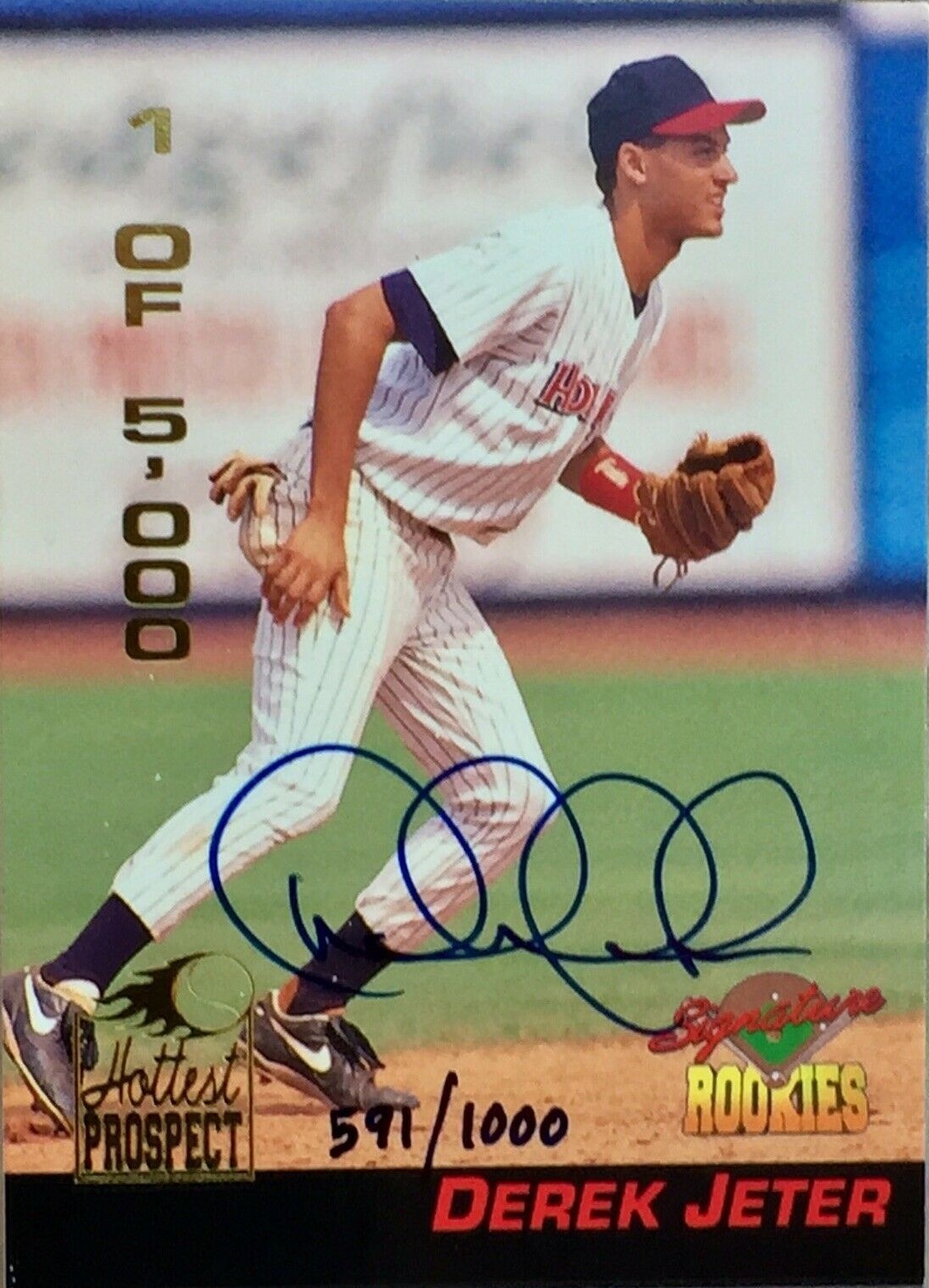 There is a couple of Jeter autograph cards worth getting from 1994. One of them is called Signature Hottest Prospects #S4, which at the time many of them were considered mail in promos that were limited to just 1,000 copies; others 3,000 but not all of them were all redeemed making it unknown of how many are actually out there. There is also a more common one, 1994 Signature Rookies #35, which has a print run of 8,650 but this card is regarded as one of Jeter’s most popular minor league autographed cards. 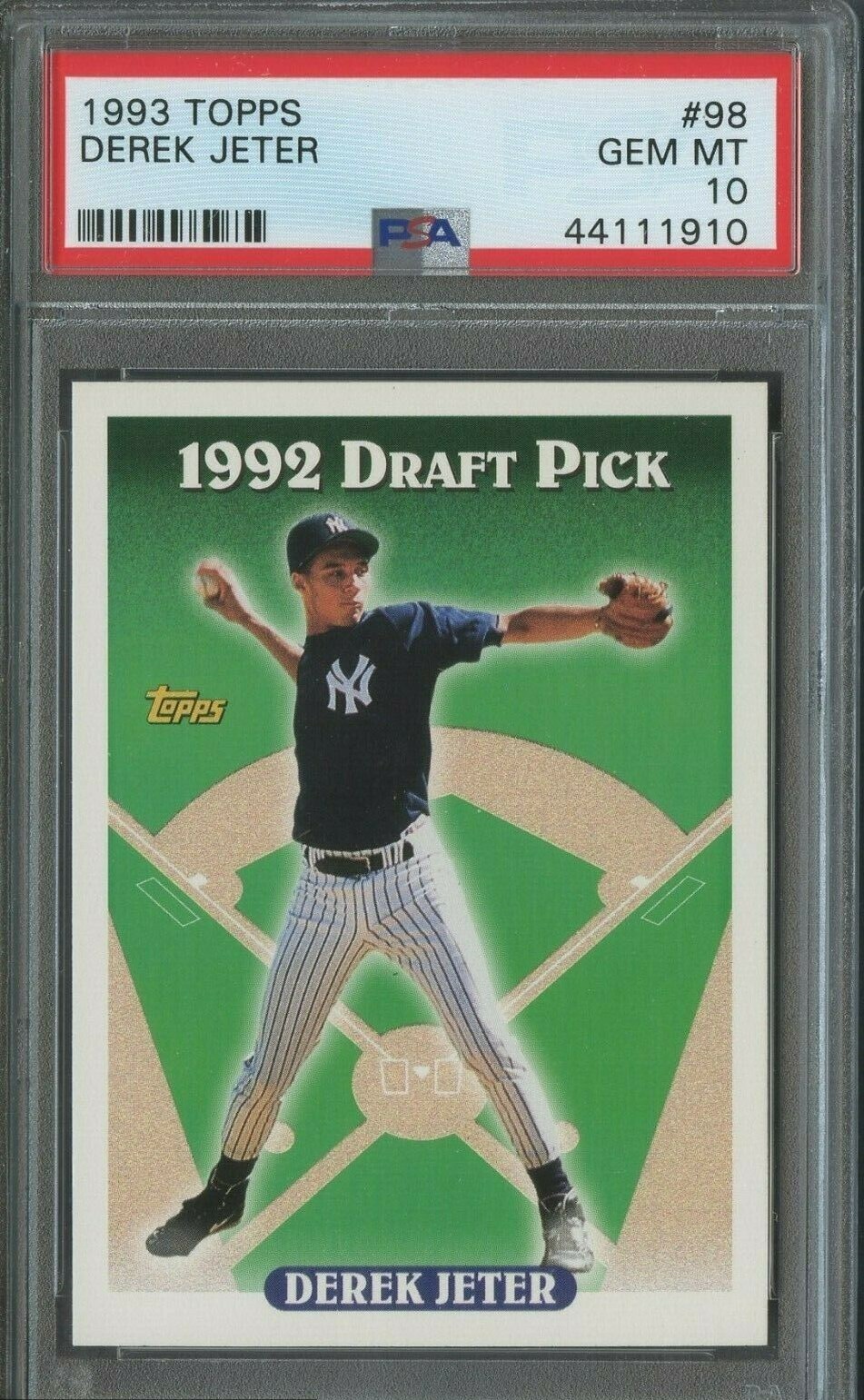 Derek Jeter’s Topps rookie is featured from 1993 and has recently trended way up in value. Since the SP rookie is becoming unattainable for many collectors, many Topps collectors are buying Jeter’s Topps rookie. As previously noted this card is offered in shorter print run inaugural versions and even has a micro version as well. Topps Gold versions were also made of this card, investing in Jeter Topps stuff is a smart investment because they will continually go up in value.

Which Jeter card that I pointed out will see the biggest increase in value from now until he is announced for the Hall of Fame in January of 2020? 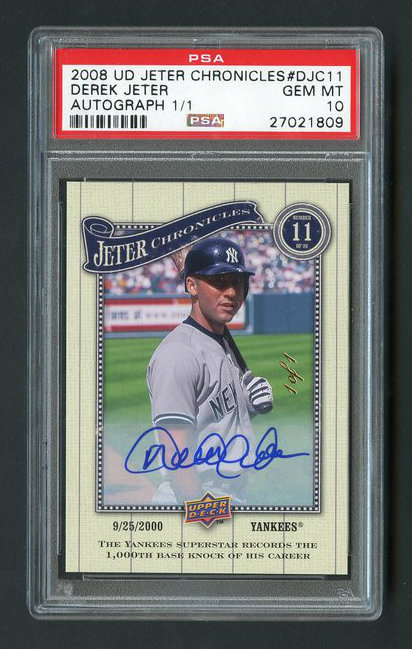